Ryan A. sent in this image of a letter (found at Letters of Note) sent to the Postmaster General in 1934, in which men ask for women to be fired so that men can have jobs: 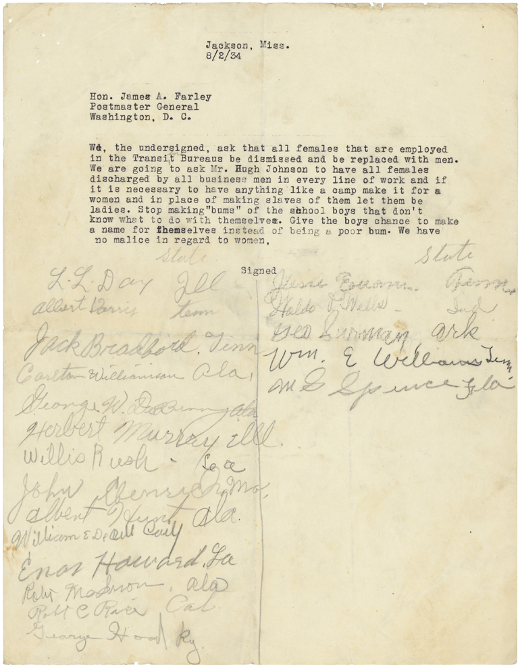 Notice that work is depicted as an oppressive burden for women (“…in place of making slaves of them let them be ladies”). Men, on the other hand, are entitled to take employment from women if they are in need of it to avoid being “bums” (and apparently it’s ok to make slaves of them).

Now, don’t get me wrong: I actually have sympathy for the psychological distress these and other men must have felt at the time. When manhood is highly associated with the ability to support a family on your income alone, job loss and poverty is not just embarrassing, it is a threat to your very identity as a man. The plea for jobs to help young men “make a name for themselves” is partly a call to let them become responsible adult men in good social standing, rather than bums (a term loaded with moral judgment).

So I have sympathy for the men struggling with the feeling of failure that came with joblessness. But it’s still noteworthy that the letter indicates a sense of entitlement to women’s jobs (much like veterans returning from World War II felt toward women who had taken jobs outside the home). Women, presumably, had a husband to support them and it was his duty to not be a bum so that she wouldn’t need to take a job from another man.

At some point it was federal law for the government not to employ both husband and wife, in order to protect men's jobs. Must have been around this time.

It reminds me of some of the anti-immigrant rhetoric we get in Europe. Obviously the jobs are "ours" that "they" come and take, etc.

I reckon that men wanting "their jobs back" was due to world war I. Little did those guys know they were going to be sent out to die again.

I remember seeing a 40s movie in which a financially comfortable married woman who wanted to work was told that the firm preferred to hire men and single women with families to support.

It's attitudes like this that make me think it's a big mistake when married women with kids "opt out" of the work world. It reinforces the idea that women aren't serious. Better to work, and try to improve conditions for working women. But a lot of the women who drop out aren't interested in long-term change.

Hard as it is to believe at times, working at a decent job is a privilege.

Side point, but I feel that when countries compel men, remove them from home, family and job and send them to, well, hell on Earth, they do have a moral obligation to re-integrate them into society if they survive.

I couldn't really take this seriously after the "Hugh Johnson" line. Oh, I went there ;)

I thought the most interesting part of this was the prose itself. In terms of period writing, we're used to reading the intricately crafted prose of high ranking state officials, scientists, poets, and similarly accomplished people. Exposed to this, one could almost start wondering if people weren't just more educated, thoughtful, and literate back then.

This is a letter brings us back to earth. A poorly written, rambling screed, clearly authored by the one man of the group literate enough to work a typewriter, it shows that people then...were the same as people now.

[...] also our recent post on a U.S. letter from the 1930s begging for women to be fired so men could have their jobs. Leave a Comment Tags: gender, history, nation: Australia, prejudice/discrimination, [...]

Um, really? You would like Mr. Hugh Johnson to keep women out of your workplace? Do you think maybe he could... pound them into submission, perhaps?

Those 19 men signed a letter together but couldn't get together to start a business on their own. I don't see how any boss would be willing to hire any of them if they are going to tell the boss how to run his business and who to hire and who to let go. Besides, what man in those days would be stupid enough to reject being around lots of women, with perks (wink wink) and choose to surround himself with a bunch of bums?

Frankly, I think this letter shows that neither gender has it easy, esp. at that time.

Women in a way were victims of low 'public' expectations.  They were not expected to be able to contribute in a serious way in the 'business world', but if they got married, they were fully expected to 'keep the house running', even if they didn't have the psychological makeup for it.

Men on the hand were expected to always be the breadwinner.   Even if the times were rough and they could not always find gainful employment, they still had that expectation on them.  If the family suffered, it was the man's fault, period.  In a sense, no excuses were tolerated.  In a way, sometimes for the time, unrealistically high 'public' expectations were placed on them.

I've got mixed emotions on it.  If a couple is comfortable with and can afford a stay-at-home parent--historically, but not necessarily moms, then there is no shame in that.   It shouldn't be a competition, but a partnership.  Frankly, if that leads to a better adjusted family, that is the most important accomplishment anyways.

My main point is this: each couple should be allowed to choose their own course without society looking down on them either way.   Whatever role each partner has, if it betters the relationship and doesn't compromise the family, I don't see where it should matter to anyone.