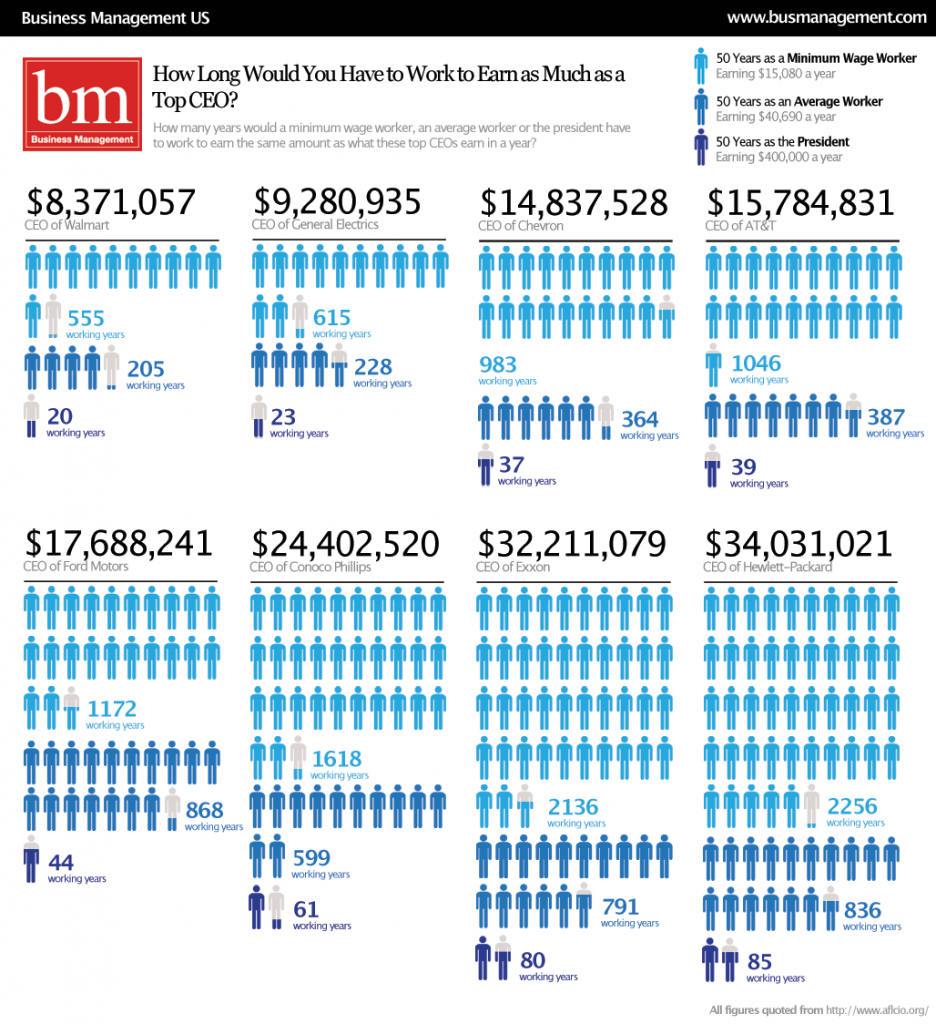 Let’s take the most dramatic example, just for fun: Hewlett-Packard.

A minimum wage worker would have to work for 2,256 years to make what what the CEO of Hewlett-Packard makes in a year.

The average worker would have to work 836 years to match his yearly salary.

And Barack Obama would have to President for 85 years before he made what the CEO of Hewlett-Packard makes in one year.

I'm pretty sure the math is way off regarding Ford Motors and average-income workers.
But still an interesting chart. I'll be sending that webpage to the professor who teaches my Law, Ethics, and Wall Street class when we talk about exorbitant executive compensation.

Wealth works when it moves. This is what economic has been slowly figuring out since it started putting itself together as a discipline. Fat paychecks for plutocrats doesn't help.

Interesting that they didn't include any companies from the financial sector in this graphic.

[...] a related point, check out this graphical depiction from Sociological Images of income differences in the United States.  The [...]

lisa, where did the post on online dating go?

I don't get why people get so bent out of shape about CEO compensation. CEOs make up such a miniscule portion of the population, getting outraged over their big paychecks is a worthless (and ultimately not very enlightening) endeavor.

Carla, the WHOLE POINT is the amount of wealth (and consequently, power) that is concentrated into just a few pockets. The point is how resources are distributed in the world and where those resources could go if more equitably distributed. You cannot separate 'individual income' from larger patterns that affect society. To say that CEO compensation can be considered in isolation from other sociological factors is to gravely misunderstand the point of this post.

And the argument used to justify the huge compensation packages is that CEO's are "more valuable" to the company. Well, maybe they are -- the good ones anyway -- but there is no way you're going to convince me that ANYone is 555 times (to use the least dramatic example up there) more valuable than the people actually working in the stores. (WalMart, as I understand it, doesn't pay much more than minimum wage to most employees.) 500 times more valuable? No. Just... no.

[...] to make what the CEO of Hewlitt-Packard makes in 1 year. This, according to the graphic reproduced here (from this original piece). Of course, we cannot all be leader of the fee world. If you are an [...]

[...] Images also has some nice images illustrating income inequality in the US. [...]

Maybe I missed that this data is only for men? Otherwise, I can't help noticing that the universal symbol for the male gender (and shades of blue) was used to represent workers. Maybe just a coincidence, but still...