Tickle Me Elmo and the Gangster Meme

The ad takes place on what appears to be an urban street (reminiscent of Sesame Street).  Two of the kids appear white, while the other two look (probably deliberately vaguely) “racial,” maybe Asian and Latino (perhaps biracial).  At the very end of the commercial the kids pose in front of a brick wall with a picture of Elmo graffiti-style.  Two of them look like they’re flashing gang signs and Elmo, no joke, says “Yeahhhhhh Booooy.”  Here’s a screen shot of the moment: 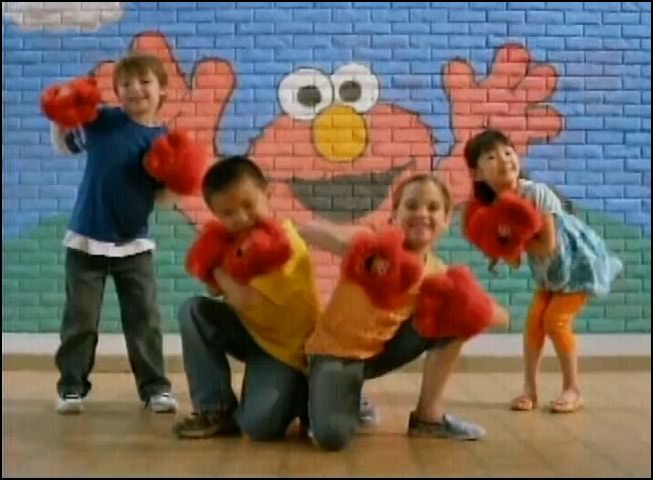 So let’s trace the evolution of the gangster meme.

1.  Government policy strips urban centers of resources, jobs leave (along with useful things like grocery stores), housing prices fall and the poor become concentrated, and those with means move to the suburbs.  With few “above ground” economic options, people turn to “underground” economies.  With only the “underclass” left, politicians (who tend to listen more to those with economic power and cultural clout) continue policies that disinvest in urban communities of color.  Say “goodbye” to things like nice parks and excellent fire protection.

2.  In a world where obeying the rules gets you nowhere fast, violence flourishes.

3.  The suffering and resourcefulness of young black, Latino, and Asian men in these communities appeals to a (mostly) white “mainstream” America for whom depictions of men of color doing violence confirms their beliefs about white superiority and advanced “civilization.”  Hip hop and rap music becomes a huge money maker for music studios and producers (and a handful of men of color).

4.  As hip hop and rap become commodified, they are depoliticized.  The “oppositional consciousness” that once characterized these art forms becomes largely lost.  For the most part, any artist that wants to “make it” has to be and say what producers think that mainstream Americans want them to do and say.

5.  Now depoliticized, being “hard” and “urban” becomes synonymous with being “cool.”  Everyone wants to be cool.

6.  Being “gangster” is appropriated by white suburban youth.

7.  Stripped of any meaning, it filters down to younger and younger kids.

For more examples of this phenomenon, see these advertising images at a shoe store, Beyonce’s House of Dereon clothing line for girls, the marketing for the Alvin and the Chipmunks remake, and these candy “grills.”

Step one made me wonder if society should make it easier for the poor to return to 'living off the land'. Meaning that because so many people moved away the people who were left would have been able to revert to farming if they had enough property. Unfortunately all the land is taken up with abandoned buildings. I realize the the former occupants of those houses still own them and it would be unfair to take it away, but there needs to be some sort of... incentive perhaps(?), for the owners to sell it to the neighbors and maybe get a tax break. To me this would depolarize things because what was once an abandoned neighborhood (which attracts violent crimes) is now a (hopefully) prosperous farming community which is attractive to the eye and the pocketbook.

Elmo is such a wannabe. anyone who's been around a bit knows that Kermit is the OMG (original muppet gangster).

I hope the kids understand that if they start flashing the Elmo signs from Sesame Street while they're in Mr. Roger's 'hood they might make Mr. Mcfeely go postal and end up getting whacked. Then the Sesame Street crew would have to unleash Drive-By-Shoot-Me Elmo and PBS will end up a violent crime infested wasteland.

Oh, and in reference to #1 of the evolution of the gangster meme, don't forget to add in the intentional flooding of poor inner-city neighborhoods with cocaine and then crack (along with heroin in the early 70's, and again today). Nobody grows coca in the U.S., after all, and all the info about how the whole corrupt-from-top-to-bottom system works is available to anyone willing to look. It's more sordid than most people can imagine.

Also, the movie Crips and Bloods: Made in America should be required viewing for... everyone. Well, except children. It's rather intense and tends to make people's hair stand on end.

I can't help but think that the mainstream glorification of a social malfunction such as gangsterism might just encourage more of the logical result of gangbanging: Criminal behavior. And that can only be good news to the shareholders of private for-profit prisons and youth detention facilities.

I wonder just how connected the people pushing the gangster trend machine are to the people running the private prisons? It's funny (well, not really) that "urban" culture adopts practical realities of prison life into fashion trends; pants with no belt sagging halfway down their ass is a way of showing solidarity with their gangster brothers cooling it in the jug. Cops love that trend because it makes running away extremely difficult, lol, but the point is that in one way or another prison is on a lot of people's minds most of the time, and that can't be good for anyone. Except those shareholders, of course.

in the same vein as it being trickles down as "cool", it's also all a money machine- marketers grab onto what ever is popular (reason notwithstanding) and commercializes the hell out of it. from the depoliticizing of rap for mainstream radio down to inclusion of gang style in fashion found in macys, until it trickles to the easiest target for advertising: children. it seems that the more popular something becomes, the more innocent it is perceived as. (okay wow, that was terrible sentence structure, but bear with me- i'm getting over a cold, lol.) the "everybody's doing it, so it can't be bad, right?" mob mentality of consumerism at it's finest.

The whole "depoliticizing" thing affects all types of music (and all art forms, for that matter) once they are "utilized" by the mainstream. Woodstock-era rock, punk, etc. all seem to have followed a similar path to hip-hop.

Also, I'm not too comfortable with the way that the terms 'hip-hop' and 'urban' are almost being used interchangeably with 'gangster' here. After watching the clip, I'm not sure how gangsterism or any sort of criminal activity got dragged into this, quite frankly. Yes, the commercialization of hip-hop (and everything else) is painful--but you can still find good hip-hop, just not on tv.

i'm sorry. what? hip hop/urban doesn't automatically mean gangster. it's racist to assume so (same goes for the overused code word ghetto). there's a spectra of global hip hop culture that can be found everywhere if you go beyong what the radio and tv tell you.

that's like me refering to a commercial featuring coutry music as repping meth dealers/ trailer parks.

Tickle Me Elmo and the Gangster Meme | Racialicious - the intersection of race and pop culture — October 7, 2009

It is 100% impossible to throw up signs while wearing enormous, fuzzy mitten-gloves! The conclusions jumped to in this post are totally irresponsible.

Also you have the origin of the gangster meme wrong. Gangster was originated by White people. The term first referred to organized criminals who were glorified in movies made by White Hollywood in the 60s-70s. Urban youth were inspired by this imagery because they could relate to the desire for a rags to riches story that involved people operating outside of the mainstream of American society. Some rappers identify with gangster more than others but they will all tell you it was something they saw White people be first in the movies. Watch the 2 of Amerikaz Most Wanted video by 2 Pac... it's just throwing those images right back at White America. You should not post about things you obviously do not understand.