The income gap between the rich and the poor is larger in the U.S. than in most other industrialized countries.  Last year we posted data about the percent of total U.S. income that went to the top 1% of earners (23% as of 2006). 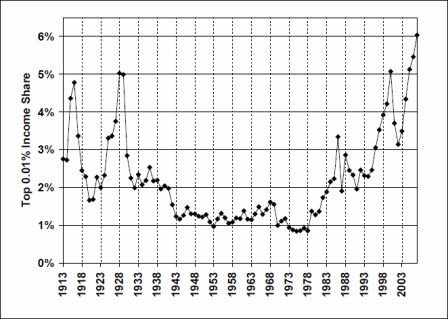 As you can see, in 2007,  the top 1/100th of 1% of earners in the U.S. brings home 6% of the total income earned in the U.S.  This represents the largest proportion of total income since at least 1913, and is the endpoint in a trajectory of rising inequality that began in the early 1980s.

Also see our posts breaking down CEO compensation, on the disproportionate tax burden by social class, and on class inequality across U.S. states.

What I find interesting about this graph is that it hits its lowest points (local minimums) during major recessions.

If you transposed that onto a graph of childhood poverty rates, it would look similar.

What would be equally interesting would be a graph of percent real income donated to charities by the 0.01% top "earners", over the same time period.

Talking about money "earned" by the "top" percent of a percent gives them waaaaay too much credit.

There is a reason why you see the very top "earners" capturing a greater percent of wealth during bubbles - the stock bubble of the 1920s, the tech bubble of the 1990s, and then the housing bubble of the 2000s. The reason is that bubbles are caused by inflating the money supply and the places where the money enters the economy are controlled by the rich and powerful. That is the reason why the banks are earning record profits right now. The way to help the middle and lower classes is to prevent inflation - even allow deflation. Deflation is only demonized by the indebted and greedy government. For the lower classes, falling prices are not a bad thing.

The lords of modern times
Are diverting our minds,
On this graph is good to focus
To see growing a world odius.

[...] charts for the share of wealth controlled by the top 10% and top 0.01%.  Ronald Reagan and the conservatives ushered in an era of unbridled greed.  An increasing amount [...]

The Myth of Saint Ronnie and Our Current Dilemma | Comments from Left Field — February 14, 2011

[...] charts for the share of wealth controlled by the top 10% and top 0.01%.  Ronald Reagan and the conservatives ushered in an era of unbridled greed.  An increasing amount [...]

[...] charts for the share of wealth controlled by the top 10% and top 0.01%. Ronald Reagan and the conservatives ushered in an era of unbridled greed. An increasing amount of [...]