Conor Clarke, at the Atlantic, offered up a graphic to call into question those who accuse Obama of being a socialist (Jonah Goldberg, Alabama Senator Richard Shelby, Phyllis Schlafly, Richard Viguerie, and The Republican National Committee, for example): 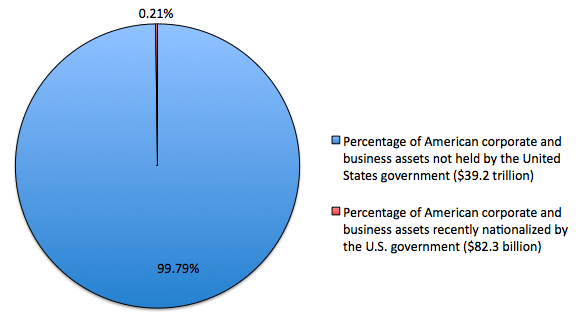 According to the graphic, Obama has nationalized 0.21% of the corporate and business assets since taking office.

Socialism, like farenheit, comes in degrees. Sure, a government that nationalizes GM is “more socialist” than one that does not, even if it doesn’t mean we’re living “under socialism.” But differences of degree shouldn’t obscure differences of kind, and as Tim Fernholz says, “it’s clear that putting the government in charge of private production is not the Obama administration’s guiding philosophy.”

If it were, 99.79% of the American corporate assets that existed at the start of the Obama administration would not remain in private hands. The differences of degree are so small that they aren’t worth mentioning. And yet, somehow, they keep getting mentioned.

The fact that whether Obama is a socialist “keep[s] getting mentioned” is an example of agenda setting.   Those who control media content have the ability to set the agenda.  That is, they can tell us what to think about (though not necessarily what to think).   By constantly asking questions or making accusations about Obama’s socialist inclinations, high-profile individuals encourage us to engage with the idea… even if only to refute it (as Clarke does).  Obama’s supposed socialism is on the agenda, even though there is little rationale (as Clarke shows) for such a heightened degree of concern.

For more examples of agenda setting, see these posts on Janet Jackson’s “wardrobe malfunction” and the New Yorker cover scandal.

It's absurd for people to criticise socialism of such a minimal degree. Don't they like our public school systems? That, too is a form of socialism, but we don't see them complaining that Obama hasn't decided to abolish that.

does any one know what businesses the government has nationalized in the past 6 months?

Actually, some would like Obama to abolish the public school system. Of course, most don't, but the most libertarian of them do.

Dear Conor Clarke,
As relevant as your insights are, they still contribute to the agenda setting - or language destruction. Socialism is not defined by how many shares in the industry are held by the government. It is defined by the social relations among the people and the modes of production. If those are not changed when the shares change owners, then it is still the same economical and social system.

The government has bought 0.21% of shares - and you imply that that makes it 0.21% "socialist". While your point is that that is an insignificant amount, you are still wrong and distorting the meanings of words according to the right-wing and US-specific agenda. You need to ask what the purpose and effect of buying those shares were. To my knowledge and according to all public statements from the administration that I have read, it was to help the capitalist economy - which would be the opposite goal of socialism. It was not to create more economic and social equality, it was not to strengthen the unions, it was not to guarantee a higher minimum wage, it was not to change the economic relations or the modes of production - it was in fact not to do anything that has anything to do with Socialism.

To bail out bankers have never been "socialist" and you really need to present the arguments behind that new and groundbreaking reinterpretation of "Socialism" - that would be something you could perhaps get published :)

Please look up the meanings of words. The right wing loves to destroy the English language. I don't think it helps to make counter-arguments that accept their nonsensical definitions (if we were to accept that definition then the US, btw, would totally be "socialist" as the military-industrial complex is government subsidized. It is not used for anything that has anything to do with any definition of socialism - quite the opposite - but if we were to accept this new and bizarre "US-Conservative" definition then the Conservatives in the US would be among the most "Socialists" in the World).

I don't think that the word "socialist" is fitting here.

Some would say that such nationalization is "social-democratic" rather than "socialist."

In the classical Marxist formulation, socialism basically is proletarian class rule which, in turn, dissolves the existence of all classes and capitalism. Although a socialist doesn't have to be a Marxist,
Marxism certainly is an important reference point for any discussion about socialism.

Anyway, I certainly don't think that the Obama administration policies are steps toward replacing capitalism with any form of outright socialism. Basically that's why I'm saying that there isn't socialism here -- because I think that socialism is about radical change (economically, above all).

Some people also said that Palin was somewhat socialist because of how oil money has been handled in Alaska. I would, again, say that "social-democratic" is a much more appropriate term.

I see now that you have made similar points, Ole.

I tend to agree with your specific points. The waters have been muddied, and the language has been stretched and mangled.

Apparently there are people who talk about "market socialism."

In Canada, there are people who think that the NDP is a socialist party. (The NDP club at the campus in this city presented themselves as socialists in one of their event promo flyers, for instance; and the event had something to do with Jeopardy or Bingo -- i.e. competing for money.) The NDP don't call for any sort of outright socialist economy, however.

Those are just a couple of additional examples.

Interesting graphic, though it depends on a bit of a simplistic understanding of what it can mean to hold a political identity of "socialist" and how that does or does not connect to particular practices when holding office. I'm sure you wouldn't have to look too far in Europe in the current neoliberal era, for example, to find politicians who tenaciously cling to the identity of "socialist" even though they have, while in power, markedly decreased state ownership over productive enterprises. And it avoids what I think is the more important point: Even the 0.21% of corporate and business assets currently held by the U.S. government have been temporarily nationalized in order to revitalize current relations of production and private accumulation, not in any sense to challenge or undermine them. Which is too bad.

I've always thought, as an interested and bemused outsider, that it is too bad that most people in most parts of the U.S. don't have more opportunity to meet and know _actual_ socialists...it would soon make it clear how hilarious and ridiculous these assertions about Obama and company really are.

I'm constantly baffled at the idea that "socialism" means a bad thing in the US.

Whether or not, or to what extent Obama is a socialist can be discerned by his willingness to nationalize sectors of the economy. How much private business he has successfully annexed so far is mostly irrelevant to discerning his personally ideologies.

I agree, socialist is hyperbole. I think statist is a more accurate and less loaded term.

My impression is that they were trying to save capitalism with all these bailouts.

It seems to me that politicians are saying socialism and meaning one thing, while hoping the people hearing the speeches will perceive something far more dangerous. To say we're becomming more socialist rather than the government is nationalizing failed large businesses is like saying two cars smashed into each other when they really just tapped fenders. It's technically true, but it implies something major that just didn't happen.

I hate to say it, but Obama being socialist has nothing to to with the AMOUNT of corporate consolidation that happens. It has to do with the methods in which he does it, which yes, are reminiscent of socialism. The graph is a typical tactic that tries to bend the stats in your favor. Almost all statisticians and journalists know this.

You could draw the same graphic, and change the labels to "percentage of white owned farms seized by the government" and apply it to the first 6 months of the mugabe administration in Zimbabwe.

The problem with the graph is that private assets are valued as a revenue stream and government assets are valued at cost. The difference between a company's market capitalisation and its book value is nearly always large and positive. A more accurate graph would show percentage of GDP used by both sectors which is closer to 20%/80%. The graph compares apples and oranges and implies a meaningless hyperbolic conclusion.

Yes. Add another category for assets previously held. We've had about 200 years for these things to accrue. Then measure the profit margins of those businesses vs. private businesses.

It comes in degrees. It's not rocket science.

I am confused Obamas campain in 2008 offered change, the American people agree to try these ideas and elected Obama President of The United States of America. Now correct me if I am wrong, did it not take more than 10 + years for our country to just about sink, how can the people expect to be pulled out of the water to shore within four years. Obama seems to be focused on the people and the communities not the institutions which are responsiable for our current status. Let's not continue to be passive thinkers and take an active role in fighting for what's most important.