The Old and New Spock and Captain Kirk

Leontine G. sent in this iconic image (found at Empire) of Spock and Captain Kirk from the original Star Trek series, next to the actors who play those characters in the new version (a movie by J.J. Abrams): 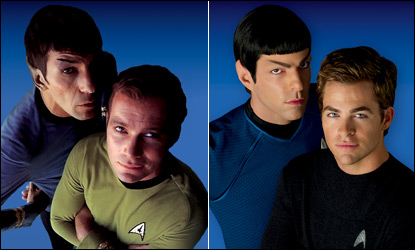 Leontine says, “I have a vague feeling that actors and musicians are getting smoother and more plasticky looking,” and this image shows some of that. The Spock and Captain Kirk on the right are supposed to be younger than the ones on the left (the movie is a prequel, more or less), but it’s not just that the actors are younger. There’s clearly also irbrushing and make-up used to erase any lines, blemishes or other “imperfections” on their faces (and either New Spock’s shirt fits perfectly, or they airbrushed out most of the wrinkles).

You might use this to talk about changing standards of beauty in the visual media. If the original Star Trek came out today, how much retouching would they do to the picture of Leonard Nimoy and William Shatner? Maybe the photo would still show them with as many wrinkles and facial lines as they have…but I’m doubtful.

For another example of how TV standards of changed (in this case, how much sexual activity is shown on teen-oriented shows),  see this post about the old and new versions of Beverly Hills, 90210.

You are right that the photo on the right shows some fairly heavy airbrushing, but another thing not being taken into account is that the two photos are lit completely differently.

Just at a glance, even with thumbnails, I can tell that the original had (probably) a single somewhat-diffused light source on camera left. It's not too diffused though because the light falloff is quite dramatic across Kirk's face. This could just be a reflector, but I'd guess it's another flash firing just a touch lighter than the main light.

This would make a huge difference, even before they let the airbrush near the shot.

The other photo is using multiple light sources, two minimum. The first is on the left, in almost the same position as the original but it's considerably more diffused. I'd say a larger softbox or perhaps just 'a' softbox if the original was using an umbrella.

There's a second light source, camera right, facing them at about 45 degrees. Kirk's right half is clearly more well lit, but Spock's is still dark. So, it seems like Kirk is in the path of the light, and is blocking some to Spock's right side.

When I posted about this on my blog, I talked about the lighting too, plus my own theory that there is homoeroticism lurking in the shadows. (http://leontinemay.livejournal.com/5605.html)

Yup, the lighting and angle of the shots are different, which limits the usefulness of side-by-side comparison. But yes, the actors in the original TV series were somewhat more quirky looking than the actors in the upcoming movie.

Remember that in 1967, a lot of homes still didn't even have color televisions--so the details of skin texture, hair, facial symmetry, etc., would probably not be so closely judged by the audience. And at the time, they hardly expected that anyone would be able to freeze-frame, screen capture, etc. Now, with HD televisions and DVDs, film and TV makers know the onscreen actors' smallest flaws will be highly visible and could pose a distraction. So it makes sense (sadly) that they'd want conventionally "prettier" casts.

(Also, Kirk and Spock used to be played by Jewish actors; now they're not. Huh.)

"...film and TV makers know the onscreen actors’ smallest flaws will be highly visible and could pose a distraction."

I think this captures one of the common 'justifications' used by media producers for such decisions (otherwise, how would they sleep at night...). The very presupposition that natural human features, as they appear on real bodies in real life, are 'flaws' which need to be obscured for the comfort of the audience points to a very disturbing set of ideas about how we collectively view and value bodies and persons today.

Just to clarify, I completely agree with Vidya on this point:

"The very presupposition that natural human features, as they appear on real bodies in real life, are ‘flaws’ which need to be obscured for the comfort of the audience points to a very disturbing set of ideas about how we collectively view and value bodies and persons today."

And the truth is that many efforts to make faces and bodies more smooth and ideal are themselves distracting--so I'd rather they didn't! (On the other hand, IIRC, Shatner was corseted for some episodes of Star Trek, as his shape strayed from the show's vision of a fit, taut captain--so maybe that hasn't changed so much.)

Supposing this is all just a matter of being lit a certain way, the important thing to think about is why did they bother to light them differently, if not to make them LOOK different?

It doesn't matter HOW they did it, what matters is the final product, and the aesthetic it's demonstrating.

The less human you look, and the more like a perfect illustration, the better. It doesn't matter where in the media you look, that's the guidelines used.

Leonard Nimoy at the time of the original filming of the series had a couple of fairly deep pockmarks near the corner of his right jaw. I only recently noticed it on YouTube, but would they have left it there today? I doubt it.

Hey, I also just noticed in the side-by-side that they're not wearing their original colors. How can it be Kirk without the butterscotch-colored jersey? ;) Spock's blue has warmed up a bit--more a deep turquoise now.

They're supposed to be younger. What better way to symbolize youth than to smooth away wrinkles? And maybe get a little carried away...