Diamonds or the Doghouse

Bern K. and Megan P. sent us another example of androcentrism (see here, here, here, and here), one that is nicely combined with the representation of women as annoying naggers, and the social construction of diamonds as men’s best friend.  Bern writes:

It starts off with promise, showing that it’s ridiculous for a man to buy his wife a vacuum cleaner for their anniversary. It finishes, unfortunately, by suggesting that the only way to get out of the doghouse is to buy his wife diamonds.

In the 5-minute commercial, men are punished by their wives for being insensitive or insulting by being sent to the “doghouse.”  In this five minute advertisement for JC Penney, men who have been sent to the doghouse are punished by being forced to do feminine tasks: fold laundry, eat quiche, and drink chai lattes.  There is some irony in that the main dude was sent to the doghouse for buying his wife a vacuum for their anniversary.  Apparently he wouldn’t want to be caught dead vacuuming… which is exactly why the gift might be considered insulting.  After all, when you give a woman a cleaning product for a gift, it means you think it’s HER JOB.

The website include the sound of a woman nagging and giving inconsistent orders (“speak less,” “talk more”).

How to get out of the doghouse? Buy your wife diamonds (at JC Penney):

I like how it says that she’ll be “screaming and jumping for joy.”  Gah, women are so shallow and annoying.

There’s more!  The website is interactive.  You can actually put people in the doghouse.  If you are on Facebook, you can upload someone’s profile picture and have it show up on the website.  A fascinating new way to merge advertising and social networking sites. 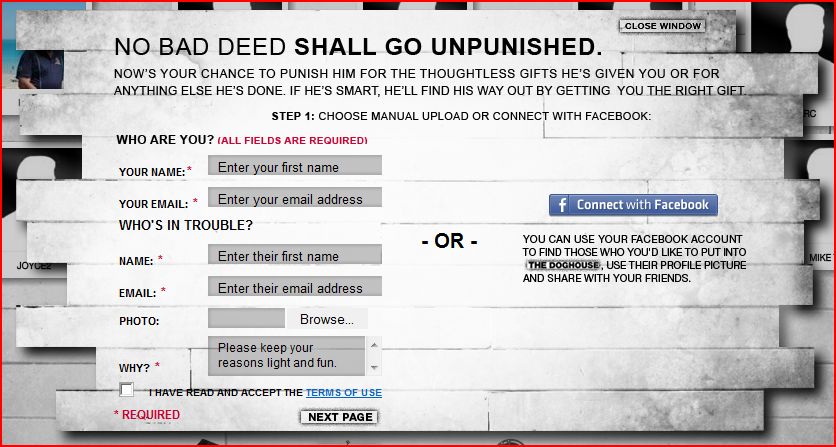 NEW (Jan. ’10)!  JC Penney apparently thought this campaign was so delightful that they updated it. Joel P. sent us the link. It’s really quite obnoxious (for all the reasons discussed above):

Jezebel also has a nice analysis.

I should also point out that the same "inconsistent orders" in the back of the Web site are also being announced in the background of the doghouse mini-movie.

[...] hope) stem from the desire to make someone else happy.   Jezebel’s has a great analysis and Contexts provides some food for thought with more info on this fantastic sales scheme that makes me want to [...]

I, for one, would much rather have some extra RAM than a useless rock around my neck.

Looks to me that they are folding laundry because that's what you often see men doing in prison movies.

And I second the RAM is better than a diamond comment. speciallyy his note

Sociological Images » Rejecting The Gender Binary In Fashion — May 4, 2009

In regards to the vacuum gift, it's not so much that "it's her job," as generally personal gifts aren't meant to be used for work. No, personal gifts are meant to be things you enjoy. Thus, the implication is that the woman MUST enjoy vacuuming, and the man clearly can't understand why she wouldn't.

The only way I can see justifying it is if money is tight and the woman genuinely wants a new vacuum, but the couple can't afford to spend that much money on a non-special-occasion purchase. Then MAYBE. But she has to request it specifically.

I don't get why this is so difficult for men to get.

The Klondike Bar: Now For Dudes Only » Sociological Images — November 14, 2009

[...] you bored of companies targeting their products at men with tired and insulting stereotypes? Well, too bad. Because ya’ll keep sendin’ them to us and [...]

I'm a huge nerd for stereotypically "feminine-work" things like vacuums and sewing machines. If my partner bought me a sweet vacuum I'd be stoked. I'd be pissed if she bought me a blood diamond.

The commercial of course is idiotic and uses the tired trope of pitting men against women, women being obsessed with jewelry, men being idiots.

Also, the guy who gave the RAM with the "thanks for the memories" note is awesome. I dare anyone to say that's not the cutest thing ever. Why is the gift itself more important than the sentiment?

Diamonds: For When You Love Her, But Are Sick of Her Talking » Sociological Images — January 18, 2010

I have been working with GSI gemological lab for several years. They offer a variety of grading services and security services. They generate grading reports which are unmatched, accurate and available in different sizes and formats with reliable information. They offer important security feature for you to verify the information you have on your grading report or reports authenticity. You can check contact details here https://gemscience.net/tools/verify-your-report/. I would like to recommend GSI and you should contact them for further information.