This is a screen shot of McCain’s appearance on The View. I thought it nicely demonstrated both rules of femininity and the breaking of rules.  Notice how all of the women, with the exception of Whoopi, have beautifully crossed legs aimed towards McCain so as to express interest.  Whoopi, in contrast, is resisting conventional expectations by taking a masculine pose (ankle on knee) aimed away from McCain.  (Of course, Whoopi as been seen taking controversial “positions” before.)  Finally, McCain himself appears to be failing to live up to normative standards of masculinity in matching the leg cross of his female hosts.  (See the second video in this post about anxiety over masculine leg crossing.) 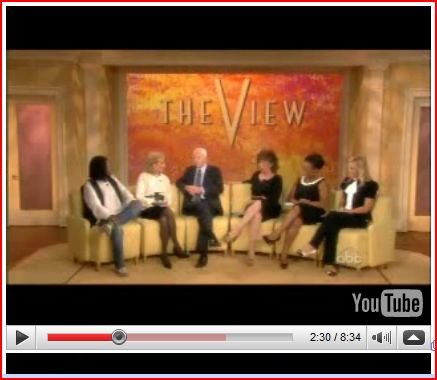 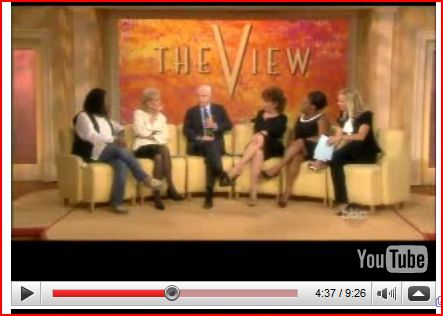 Though she appears to be the only one who appears to pose according to comfort: 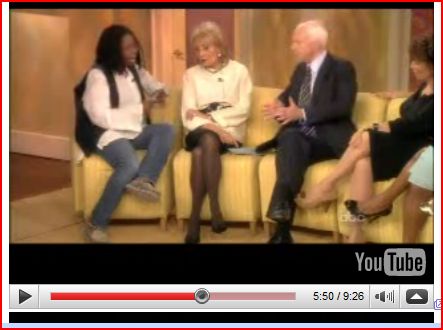 Still stolen from videos at Perez.

She's the only one that isn't in a skirt and/or heels, so it's a lot easier for her to be comfortable. I gesture and shift a lot when I have an animated conversation, so I would dress the same. I would assume the more uncomfortable I felt the less I would talk.

That shot is awkward - the women in skirts all have hems above the knee, which would be fine under a table (they usually sit at a table, right?), but since they're posed on those little wedge chairs all close together, the instinct is to immediately pull in and take up as little space as possible, as well as keep legs firmly crossed so as not to accidentally flash the camera. I wonder if they didn't know they'd be sitting out there, or if they're used to it by now and don't think about it.

Besides, I'm sure the McCain campaign would want to know where do you get the nerve to criticize the leg position of a man who SPENT FIVE YEARS BEING TORTURED AS P.O.W. ?

Over analysing much? I mean, gee, it's just a leg cross. And you say the women are interested in him because they cross their leg in his direction and that he is "breaking rules" by crossing his legs. Leg crossing is normal for everyone.

The blond woman at the end is sitting in what you've described as a masculine pose. She is leaning in towards McCain, but still....

Fernando, body language is actually pretty significant. It's also much more than just leg crossing. I can't seem to find the series of pictures I'm thinking of on the net, but imagine John McCain sitting straight back in his chair with his legs crossed tightly, his hands together, and his head cocked slightly to listen.

Now imagine one of the women on The View leaning forward, one hand on one knee, the other elbow on the other, with the hand supporting the chin.

These are both very traditionally "feminine" and "masculine" styles of body language, and their poignancy is made clear when we consider how strange it would look when the opposite positions are enacted.