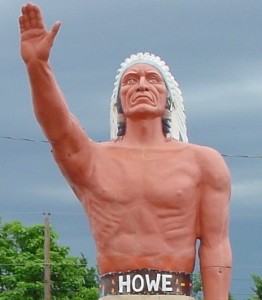 Sociological Images is a daily read. I enjoy watching you get your panties in a wad over the most innocuous, innocent things. Practically everything you abhor, I celebrate.

I trust you are schoolkids and have time to mature from the prissy petulant outrage.

happyacres: uh, you celebrate utterly cheesy monstrosities on display outside car dealerships? (regardless of any cultural or political concerns, that thing is hideous) Different strokes I guess...

Anyhow, I was told that the origin of the "How" thing as an Indian greeting was that it was a condensed version of the way they heard white people greeting each other. Indians didn't interrogate each other about their personal lives every time they happened to bump into each other like we did and still do. It might have been mentioned in Black Elk Speaks, but I'm not sure.

"How is your family?"

So, why not just say "How?" to cover all of the above? Makes sense, really. Then again, whenever I was on a Rez nobody ever greeted me like that, and I've visited quite a few (lived in AZ for years).

This is not in Elk City, Oklahoma! The Indian statue sits on the Howe Chevrolet lot in Clinton, OK, which is about 25 miles to the east.

Hahaha Interesting conversation. In Elk City, Oklahoma you can see everything

The photo on the billboard (still standing in Dec 2009) is of the Indian variety Muffler Man. The indian was removed in late 2009.