Soon after reading my post on “ethnic” fashion, Robin noticed an article in the New York Times about “tribal” elements in fashion. According to the article, “The tribal trend, seen on spring runways awash with ikat, batik, and African wax prints, is hot this summer.” We helpfully learn, “The specimens are rarely authentic, mind you. Rather, designers have appropriated ethnic elements and given them a modern spin.” According to one designer,

“It’s a dialogue between what’s traditional and new, and between East and West,” she said. “Our weavers in Uzbekistan find it really surprising and a real struggle to begin with. At first they don’t like the reworked designs, but over time they acquire appreciation.”

A quote from another designer:

“The enticement of ethnic dress in modern culture is like going on a guided safari,” he said. “We can enjoy the element we are familiar with and attracted to, while not giving up our daily comforts. We can wave to the lion from the safety of our S.U.V.”

So wearing “ethnic” clothing is like going on a sightseeing trip where you can look at savage animals but in a safe way that doesn’t actually bring you in contact with them…interesting. “We” (non-ethnic) people can pick and choose a few things from other cultures but without giving up “daily comforts,” or, like, knowing anything about other people or thinking through thorny issues like who that “we” encompasses and who is doing the defining of “we” and the ethnic “them.” I have to say, the “We can enjoy the element we are…attracted to…” made me think of sex tourism.

Notice here that, first, “ethnic” or “tribal” is applied to an enormous range of cultures spanning the globe that have little in common except not being from Western Europe or the U.S. Also, we see that “ethnic” fashion = traditional = non-modern = wild/animalistic = Eastern, whereas “modern” fashion = Western = non-ethnic. Because there is no ethnicity in the “West.” Except when designers use “traditional” Aztec or Mayan or Mexican or Laplander or etc. etc. prints in their “ethnic” designs.

Here are some pictures from the accompanying slide show:

This purse is $565. The weaving is what the quote from the first designer above was saying she struggled with Uzbeki producers about, since they didn’t like her reworked versions of their “traditional” patterns. I wonder how much of that $565 goes to those weavers? 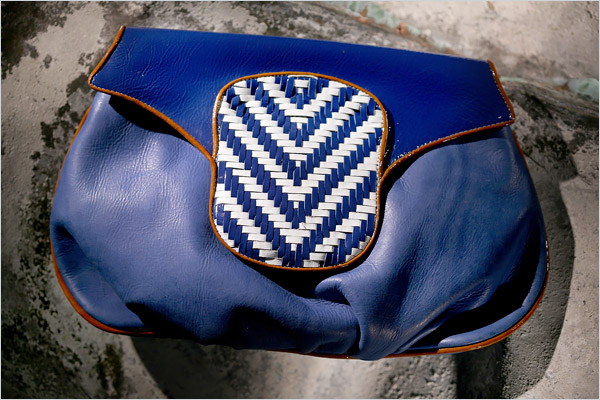 The caption to the photo of these boots is “cultural gumbo.” They are $350. 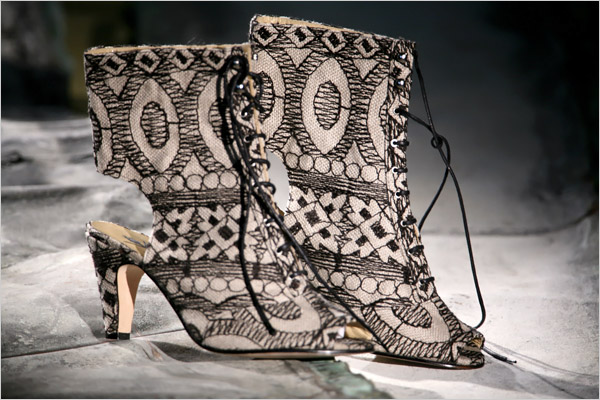 These bangles come in cashmere, tweed, and cotton and are $45-125. The article does not tell me if I am being “ethnic” and going on a fashion safari every time I wear my black cashmere cardigan. Maybe it has to be brightly-colored cashmere to be “tribal.” 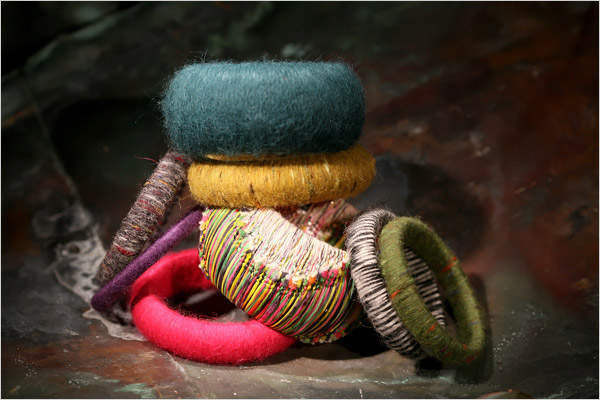 These shoes are $715. They are ethnic because they are silk and I guess maybe that’s supposed to be a vaguely Asian-y print on the black ones. My years of training in a rigorous sociology Ph.D. program also give me the critical thinking and analytical skills to tell you with certainty that they are hideously ugly. 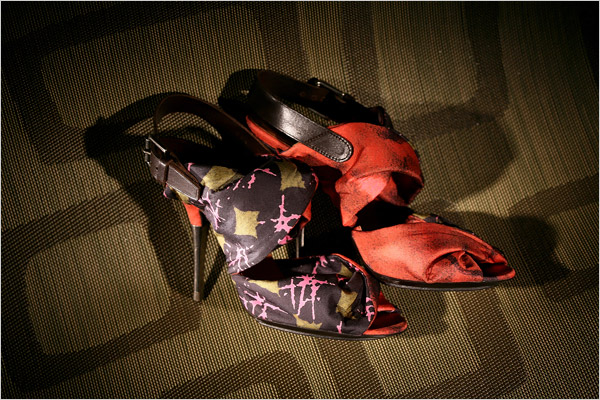 These clutches are $450. They are ethnic because they use a style of dying called ikat, and also probably because they have a vaguely animal-print design. 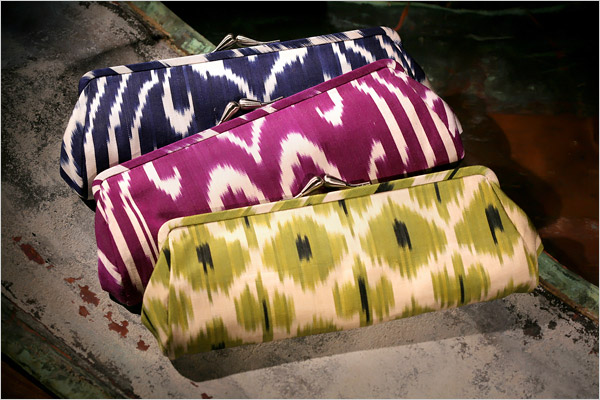 NEW: Katie J. sent in a link to Pepperlime (part of the Gap/Banana Republic/Old Navy empire), which features shoes that let the wearer “go tribal”:

"We can wave to the lion from the safety of our S.U.V.”

Yeah, because cultural practices that are different from "ours" should be obviously and unproblematically compared to lions, who are often characterized as "savage" and dangerous animals.

But turnabout is fair play. Here is an article in Pingmag about a shop/atelier in Tokyo that does kimono with punk motifs, and snakeskin or leather obi [kimono belt] to match them:
http://pingmag.jp/2007/07/30/punk-yukata/

Not that traditional kimono stores aren't open to modern touches — this summer season gauzy and lacy obi seem to be in vogue, and kimono also get the lace treatment.
http://item.rakuten.co.jp/haimuraya/c/0000000159/

[...] you do instead of filling out a form at all. It is, of course; Insert Culture Here. Like a giant catalog of culture; “Honey, we need some culture. Shall we buy the maasai beads or the brass C&O canal lock [...]

?? The patterns on those clutches are not animal prints, but a classic Uzbek silk design! And elsewhere along the Silk Route.

Thanks for sharing this post. I just love the way how you explain each and everything.