The other day I came upon this fashion spread in a magazine: 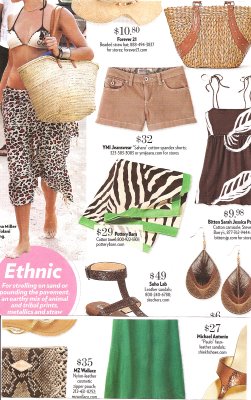 I’m not sure which magazine–I want to say Lucky, but I’m not certain. I just scanned in part of it–I cut out a few things that weren’t that interesting so I could get it in a single scan.

Anyway, I noticed it’s called “Ethnic,” and I started thinking about that label, what makes these “ethnic,” and the choice of that word to describe fashion. The most common element to the collection is animal prints–zebra, leopard, snakeskin, croc, peacock feathers. There were a couple of things that I believe were supposed to be recognizable as “African” prints. I guess those brown shorts are “ethnic” because of the material they’re made from.

But why do we call these fashions “ethnic”? Why not “global”? Or “nature,” since the main themes seem to be animal prints and natural fibers? Or “international”? Why do animal prints, feathers, and grass fibers = ethnic?

It made me think about the way that the things that certain groups do or have go unmarked–so here, there is a category of fashion that is “ethnic,” while apparently all other clothing is ethnicity-less. When I carry a woven bag or wear a shirt with tropical-looking leaves on it, I’m being ethnic, but if I put that purse down and pick up a blue leather one, or change into a shirt with a maple leaf on it, I’d stop being ethnic and go back to being…well, presumably plain-old white, the non-ethnic, non-marked category.

I just thought this might be interesting for a discussion about race and which groups are marked as having a race or ethnicity and which ones (in the U.S., primarily whites) are treated as though they do not have a race/ethnicity and thus aren’t relevant to discussions about racial issues. Or maybe when talking about race/ethnicity as a marketing tool, as something you can put on and take off at will.

... but "white" (i.e., American white) is also "ethnic." "White" is a "race" (if you are going to make divisions based on a concept that has been shown to be biologically irrelevant ), too. Therefore, everything that White Americans buy is, also "ethnic."

But maybe "ethnic" is merely a short-hand way for Whities to feel - at the same time - guilt-assuaged for not being "racist" or "non-PC" by categorizing the "other" by their race/national origin and comfortably chic eating or wearing something that is not part of their own culture (read: "ethnic identity").

What I find horribly annoying is that the word has become so quickly entrenched in the American vocabulary that people use it without really knowing that they are. And as a catch-all for everything that isn't "White America", it is in many ways more insulting (read: "non-PC" and "racist") than calling a spade a spade. Why should (for example) a SE Asian woven handbag be part of the same uncategorized "ethnic" as a zebra-print pants?

As a counter question, would a person dressed in European dress be considered "ethnic"? If so, at what point of "deviation from the norm" would this occur: when a person wears a beret (probably not), a "European cut" suit (also probably not), a kilt (maybe), or lederhosen (maybe)? I say "maybe" because I'm sure that many White Americans would consider these last two to be part of "traditional/cultural dress", and not "ethnic." (Although you could argue that if culture and ethnic identity are tied together, then "cultural dress" = "ethnic.")

This use of "ethnic" reminds me of a sarcastic definition of the term in The Superior Person's Book of Words where, author Peter Bowler remarks, people use the adjective "ethnic" to refer to "funny little foreign [person or thing]." As Umlud says, it can be a very dismissive term.

[...] of decades and countries are represented. Recent posts that have caught my eye include one about “ethnic” fashion, and one exploring gender roles from The Bee [...]

[...] after reading my post on “ethnic” fashion, Robin noticed an article in the New York Times about “tribal” elements in fashion. [...]

[...] is Dutch to remind you that a white person wearing “Afrika” colors is a certain kind of poseur, and eschewing all the cool Africa safari imagery in favor of the Zebra. I mean, seriously, [...]

I think the term "ethnic" in this instance is simply misapplied. A more accurate term would be "exotic". Old Navy and Gap are "ethnic" Western white person wear, and, though intrinsically "ethnic", are still not considered "exotic". Conversely, Old Navy and Gap might be considered "exotic" by other cultures vastly different from our own. Perhaps the term "ethnic" replaced "exotic" simply because "exotic" clothing makes one consider ethnicity itself.