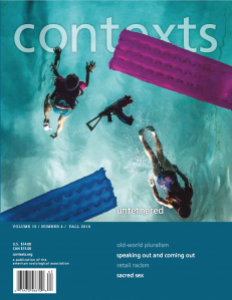 Hey Girl w/ Pen readers! I’m excited to share with you an excerpt of a piece I wrote recently with sociologist, Orit Avishai, on how some evangelical Christians and Orthodox Jews challenge stereotypes about conservative religion and sexuality that appears in the latest edition of the American Sociological Association’s (ASA) Contexts magazine. You can read the full article for free for a limited time here.

On the other side of the globe, in Israel, an Orthodox Jewish bridal counselor discussed with Orit the sexual education component of a twelve-session marriage preparation course. A stern looking woman in her fifties, she served as an example for brides-to-be of Jewish modesty codes—hair covered, she was dressed in a long skirt and shirt with long sleeves and high neckline. Yet she spoke enthusiastically and directly to the sexually uninitiated young women enrolled in the course, telling them to “Get the mood right. Tell him what you want.”

Were it not for the obvious markers of religion, these scenes might not be surprising in the 21st century. At least within western popular culture, “good sex” has seemingly won out over sexual shame and become a prerogative of modern adult life. From advice books like The Joy of Sex to TV shows like Sex in the City and popular podcasts like Savage Love, a fulfilling sex life is promoted as integral to happiness and personal fulfillment. But religious traditions are notorious for sexual rules and norms that seem to fly in the face of modern secular culture, with its emphasis on sexual expression, experimentation, and satisfaction. In fact, many observers associate the expansion of progressive sexual norms and practices with the decline of organized religion.

It is in this context that we examine how some religious followers live and love amid secular and religious messages about sex and sexuality. Kelsy observed, surveyed, and interviewed American evangelical Christians who used websites or attended workshops to discuss sexual pleasure in Christian marriages. Orit interviewed Orthodox Jewish women in Israel about the sexual education that is part of an elaborate marriage preparation. The believers, educators, and experts we interviewed and observed contradicted the stereotype that religiosity is incompatible with sexual pleasure. They self-identified as “traditional,” “conservative,” and “devout,” yet insisted that their religious traditions encouraged sexual pleasure and could even improve how they experienced sexuality. Our respondents learned to navigate the religiously prescribed boundaries surrounding sexuality and embrace “good,” religiously sanctioned sex.