For months I’ve been keeping an eye on (and meaning to write about) various campaigns that address or try to rectify gender stereotyping in children’s clothing.  I was cheering on Michele Yulo of Princess Free Zone  and her campaign to create a new line of suits specifically for girls, (Suit Her), which looks like it will need another round of funding.  Yet more independent online shops seem to be popping up to offer lines of slogan-free, neutral clothing for (mostly) girls and tracking how these shops re-envision engendering their wares could be the basis for a great study.  Asking the owners if they’re yet making any kind of significant profit or gaining traction using clothing to enact social change could well be another.

Not too long ago I saw a great think piece which asked why refashioning girls’ clothing always means refusing skirts and dresses (i.e. rejecting the trope of femininity) and not offering boys a range of skirts, dresses, or pink garments and mixing all of this up.  It’s a point well taken and the lack of variety in boys clothing, nevermind fewer choices overall, hits close to home as I continue to try to dress my three-year-old in ways that eschew slogans and stereotypes.

While independent visionaries will keep pushing boundaries (so I hope) when a mainstream clothier makes a move it’s significant.  I was deeply intrigued (and initially suspicious) by the new line Ellen Degeneres launched with The Gap about two months ago, but am slowly coming around.  The videos shot for the line (and the “unstaged” behind the scenes ones) are deliberately black and white, with no pink anywhere.  The girls are making faces, getting muddy, catching frogs, creating with robotics, and pounding the drums — what girls do — or, the opposite of what girls are supposed to do?

The blue/gray/black palette of the actual clothes reminds me of how frustrated I often feel not being able to buy lighter colors for my son — again, is this just a simple inversion so that the GAP can catch the wave of easy empowerment that so many corporations want to claim, all under the guise of generously helping girls?

I was intrigued to learn that some of the nonprofessional models are part of the Pink Helmet Posse — skateboarders who all started young and are frank with Degeneres about the prejudice they have experienced.

I was also cheered to learn that $250,000 from sales “will be donated to Girls Inc.”  Even if that’s a tiny fraction of their profit and a simple PR move, it’s something for a nonprofit I respect.  Glancing at the #heyworld Twitter hashtag they’ve coined, (meant to foster discussion about supporting girls), didn’t yield much and seems an easy vehicle through which the GAP can keep promoting its campaign — i.e.  both sales and a message of social change.  But it is a step in a different direction for a major retailer whose children’s departments are fundamentally bifurcated. I assume that this line “GapKids x ED Collection” will be solidly planted on the girls’ side, at least breaking up the color scheme a little, and changing through less static models, (literally, with the girls in their advertising), the message beyond the ad.

In parallel with measuring change within the kids’ clothing world, I was curious how Halloween would fare this year.  The yearly lament about the oversexualization of costumes for both girls and women has been well underway, and this recent article comments on how often “man” v. “girl” is used to describe parallel costumes. With Target’s recent desegregation of the toy aisle, I wondered what they would do with Halloween. Visiting two local stores revealed costumes identified by ages v. gender, although the costumes themselves (not unlike the toys) definitely skew towards gender stereotypes.

More cheering, in parallel with the work independent retailers are doing, there has been an amazing wealth of feminist Halloween ideas out on the Internet.  A quick roundup shows real pushback against sexualized, reductive costumes that define what girls can be through the limitation of their offerings, although these are all “home made” v. mass marketed costumes. Some play on a facile definition of feminism, some gleefully use the holiday to publicly make a social statement with pointed humor.  Some good ideas from Girls Leadership here. Thanks to Bitch Media for this great collection. And some good ideas are also listed here. 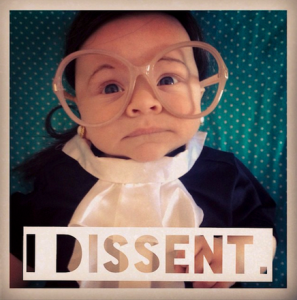 The recent article in the New York Times, “Where Have All the Tomboys Gone?” (which highlights Degeneres’s new GAP line) refers to the term “tomboy” as “retro” and outdated, unnecessary when (of the people interviewed) there’s casual acceptance of girls who don’t want to dress in stereotypically feminine ways and surprise that it would be otherwise (at least in their families). The trend of women adapting “men’s wear” is traced with emphasis that this is a one-way street in the mainstream, i.e. there is never a public trend of men wearing styles designated for women.

“Tomboy” as a phrase might be leaving the American lexicon, but keeping an eye on Halloween costume options is one way to watch levels of crossing and acceptance.  With the awareness that girls adapting into male-designated clothing is always far less objectionable than the reverse, glad as I was to see lists of feminist costume ideas proliferate on the web, I regret that there wasn’t a list for boys or men. While one girl at my son’s preschool chose a male superhero costume (complete with rippling plastic chest), the winks at how “cute” this was, I’m certain, wouldn’t have gone to a boy dressing up as Elsa. Moving beyond just gender, this article, “What Color is Your Princess?” astutely highlights the assumption of whiteness within the princess universe, which is of greater concern to the author than that her son wants to dress up as one at all.

I didn’t know the Onion ventured into video and stumbled on this one from a few years back.  Entitled, “How To Find A Masculine Halloween Costume for Your Effeminate Son” it’s a parody that’s painful to watch as boys who don’t want masculinized costumes are “rehabilitated” into stereotypically “boy costumes” to disguise their features or habits labeled as feminine.  It’s stunning in its spot-on precision about anxiety about boys breaking with male code.

As a yearly barometer, Halloween can offer a quick read of current trends, pop culture, and what gender stereotypes are readily available and which are still transgressive to cross. Yet, studying what commercial retailers and independent outlets do the rest of the year is a far more steady signifier of what change has occurred, and what trend is edging over into expectation.   In a year’s time it will be interesting to see what is (still) considered humorous, provocative, or casually acceptable.  Happy feminist Halloween!