There’s been a lot of evangelical Christian commentary in response to the Supreme Court ruling last month that legalized marriage for gays and lesbians. Jimmy Carter says that Jesus would approve of gay marriage. Franklin Graham says that God might strike the White House with lightning for its rainbow makeover on the night of June 26. 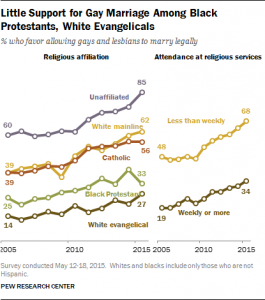 White conservative Protestant evangelicals have been the obligatory homophobes in the political controversy over same-sex marriage in America since its beginning. And for good reason. According to Pew Research polling since 2001, these evangelicals consistently lag behind the rest of the country when it comes to favoring gay unions. The National Association of Evangelicals released a statement on June 26 confirming that, despite the Supreme Court ruling, God defines marriage as a “covenant relationship between a man and a woman.” Yet, there is an increasing amount of evidence to suggest that evangelicals are, in fact, changing their minds when it comes to who should be able to legally marry. Sociologists Lydia Bean and Brandon Martinez analyze national survey data to argue that evangelicals are increasingly ambivalent about same-sex marriage. Evangelicals have become more supportive over the past decade, though they still have lower level of support than all other religious groups. A 2013 survey conducted by the Public Religion Research Institute finds that Evangelical Millennials (18-33 year olds), in particular, seem to defy evangelical stereotypes with 43 percent of whom support same-sex marriage.

Now that same-sex marriage is legal throughout the nation, it seems inevitable that evangelicals will continue to increase their support for it. But what does this mean for conservative Protestant evangelicals, whose beliefs are structured around ideas about gender difference and heterosexuality? Will evangelical beliefs fundamentally change by allowing gays and lesbians into the sanctity of marriage? I believe no.

I find that when engaging in sex that removes them from their role as active penetrator, Christian men must find other ways to construct their masculine identities. They draw on the sense that their relationships with their wives and with God are spiritually exceptional, and that these relationship, more than anything else, are what construct their identities as Godly men. I call this gender omniscience, which defines gender through a spouse and God’s unique ability to know the unknowable: a man’s “true” gender. This renders even non-normative sex quintessentially heterosexual and gender normal.

An optimistic reading of evangelicals’ sense of permissible sex might suggest that they are on a trajectory toward acceptance of multiple kinds of sexual expressions and identities. At what point does the technically heterosexual sex between a woman penetrating a man with a strap-on dildo lose its “straightness?” Or to put this another way, at what point does a gay man penetrated by his husband become a part of what evangelicals deem Godly sex? It is a blurry line. Evangelicals see gender as predetermined, natural and mutually exclusive between men and women, but malleable enough to accommodate a diverse array of actions and behaviors. They see heterosexuality as a clear line in the sand distinguishing right and wrong but make the boundaries of heterosexuality expansive enough so as to incorporate a diverse arranging of men’s and women’s bodies to engage in sex acts other than penile-vaginal intercourse.

Yet as I think about some Christian sexuality website users who guiltlessly engage in pegging, I become increasingly convinced that their logic actually reinforces and bolsters sexual boundaries, not diminishes them. Relying on the relationship between a believer, spouse, and a God who is presumed to condemn homosexuality, evangelicals make claims about who gets the Godly advantage of limitless sexuality, and who is stuck outside this charmed circle. If the prediction is correct that a majority of evangelicals, like the broader American public, will eventually support same-sex marriage, my research suggests that they may do this while still excluding gays, lesbians, and other queers from Godly sex.

Other scholars looking at Evangelical attitudes toward sexual identity and expression have made similar observations about the primacy of gender vs. sexual acts in modern Evangelicals rejection of same-sex desire. I'm thinking, for example, of Tanya Erzen's Straight to Jesus (2006) which explores ex-gay ministries. Her ethnographic study shows how gender anxieties, and the loss of a logic of gender complimentarity, seem to be the driver of ex-gay impulses for many movement leaders. One can therefore still be same-sex oriented in one's desires but as long as you're gender-conforming and performing heteronormative marriage roles with an other-gender spouse, those same-sex desires -- and even the occasional act! -- can be safely contained.

As someone interested in both feminist and human sexual diversity, I find it fascinating that in the end homosexuality leading to gender equality is somehow more threatening at this juncture than women's liberation leading to sexual deviancy.

Thanks for your spot-on comment, Anna. The themes in my observations are very common for scholars who study other aspects of evangelicals and sexuality--which I find all the more fascinating!