* This post originally ran in the Ms. Magazine blog.  And I can’t help but post a link to father-of-two-girls President Barack Obama who made news recently for sorting toys outside of the expected gender box — literally!

If you’re still thinking about last-minute shopping, it’s not too late to stop and consider the No Gender December campaign from Australian organization Play Unlimited. While their tagline, “Stereotypes Have No Place Under My Christmas Tree,” presumes everyone is celebrating Christmas, their message is one that’s gone global as a quick look at their pledge page reveals, with more signatures still pouring in.

It’s heartening to see wider messaging about the limitations of gender stereotyping in children’s toys, as a flurry of recent articles reveals. More heartening would be harder evidence that toy companies are listening and are open to broader understandings of marketing to kids, not driven by a bifurcated blue-or-pink bottom dollar. Some stores, notably Harrod’s in London have stopped divvying up their aisles, and there is reason to hope that other retailers will follow. Sociologist Elizabeth Sweet’s Atlantic article, “Toys Are More Divided by Gender Now Than They Were 50 Years Ago,” does a great job of revealing the history of marketing by toy companies and how entrenched gender stereotypes have become. Her comment about the subversive repackaging of toys geared to girls which “emphasizes freedom and choice,” is a great one. She comments, “The reformulated story does not fundamentally challenge gender stereotypes; it merely repackages them to make them more palatable in a ‘post-feminist’ era. Girls can be anything—as long as it’s passive and beauty-focused.”

This juncture is one that has been a sticking point for many who deeply desire change in toys marketed to girls but are left stymied by how to do it. Some of the brouhaha around GoldieBlox’s campaign turned on the point that serving up “sparkle science-type” projects to girls in a gateway-like attempt to lure them past masculine associations with STEM fields does nothing but backfire, nevermind is ultimately undermining. This seems to be the pivot point for those who support diversifying the colors, (and stereotypes that accompany them), in the toy aisles, with supporters of change often facing different directions in terms of approach, even as they stand on common ground. 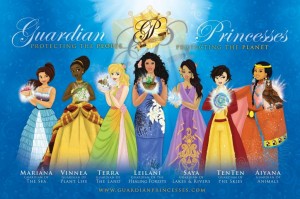 More recently, a new set of princesses came onto the scene who are also stealthily undermining stereotypes. The Guardian Princesses, who made a splash with their debut last year, are back with newly released titles just this past week. The series is the brainchild of UC Riverside Professor of Media and Cultural Studies Setsu Shigematsu, who found herself at a loss when her daughter began to succumb to the ever-present influence of princess culture and denying access to it only seemed to make things worse. Not unlike Peggy Orenstein, author of Cinderella Ate My Daughter, and her suggestion to “Fight Fun with Fun” through alternatives to princess culture, Shigematsu wrote a different princess story and, after reading it to her daughter’s friends, a new legacy was born.

The Guardian Princesses are presented in a range of body styles and are of diverse ethnicities and there’s no fighting the long dresses, necklaces and flowing hair that’s considered part of the princess look. The approach of the Guardian Princess Alliance is firmly in the “ease in and then make a change” camp, something they are likely to be critiqued for by those who see capitulation in any form as not radical enough and even pandering. But, as their peppy video (below) reveals, despite their poufy dresses, the princesses are unhindered in their mobility and the rhetoric used about their mission is hardly passive.

The newest series released features Princess Ten Ten, who is the most gender-fluid in appearance of the lot (or “gender independent” as they term it) and who is bullied and faces rejection within her family.  In a wise move, all of the Guardian Princess books are compliant with Common Core standards, meaning they can be adopted for classroom use, and there is a distinctive environmental focus to their stories. One risk with this new series might be making the stories too didactic or pitting the princesses against the evils of corporate greed every time, but, overall, the shift in what these princesses do and what is valued is an exhilarating breath of fresh air. How well they sell, and how long the Guardian Princess Alliance can keep up with demand and generate new work, are perhaps the issues at hand. The desire by visionary small business ownersto put what are still alternative toys, books and gender messaging out to the public seems an uphill battle, one mitigated by energy, perseverance and available funds when up against so many cultural barriers, which is all the more reason to celebrate those that do.

Here’s hoping that the messages espoused by the No Gender December campaign extend beyond the shopping frenzy and, optimistically, become part of retailers, parents, teachers and even kids’ expectations of toys in the new year.