By: Tristan Bridges and CJ Pascoe 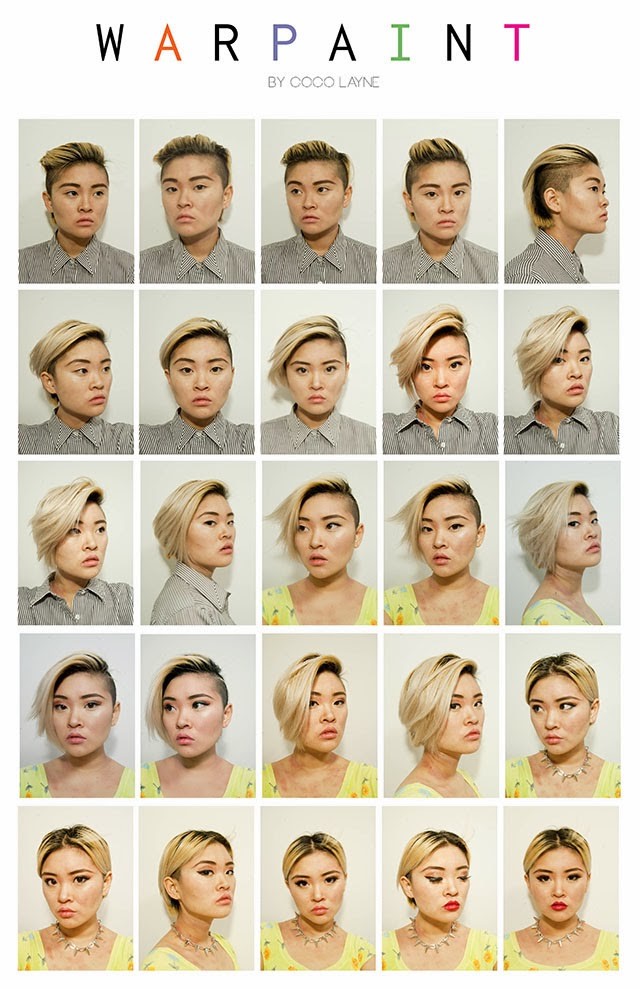 Coco Layne got a haircut.  She shaved both sides of her head, but left the top at a length that falls roughly to the bottom of her face.  As a feminist fashion, art, and lifestyle blogger, she was quick to recognize the ways that she could subtly re-style her hair and dramatically alter her presentation of gender (here).   So, in classic feminist art blogger style, she produced an art project depicting her experience.  Coco’s project—“Warpaint”—comes on the heels of several other photographic projects dealing critically with gender: JJ Levine’s series of photographs—“Alone Time”—depicting one person posing as both a man and a woman in a single photograph (digitally altered to include both images); the media frenzy over Casey Legler, a woman who garnered attention, recognition and contracts modeling as a man; the Japanese lingerie company that recently went viral by using a man’s body to sell a push-up bra, just to name a few.

Along with these other photographic projects on gender, Warpaint is critical commentary on what gender is, where it comes from, how flexible it is, what this flexibility means, and what gender (non)conformity has to do with sexuality.  Coco’s work provides important lessons about how gender is produced just below the radar of most people most of the time.  These projects all point out the extensive work that goes into doing gender in a way that is recognizable by others. Indeed, recognition by others is key to doing gender “correctly.” It is what scholar Judith Butler calls performativity or the way in which people are compelled to engage in an identifiably gendered performance. When people fail to do this, Butler argues that they are abject, not culturally decipherable and thus subject to all sorts of social sanctions. Butler points out that the performance of gender itself produces a belief that something, someone, or some authentic, inalienable gendered self lies behind the performance.  These photographic projects lay bear the fiction that there is this sort of inevitably gendered self behind the performance of gender.  This is precisely why these projects produce such discussion and, for some, discomfort.  It makes (some of) us uncomfortable by challenging our investments in and folk theories surrounding certain ways of thinking about gender and sexuality.

Much of the commentary the Warpaint project focused on Coco’s ability to get a retail job when she displayed her body in ways depicted on the bottom row.  Indeed her experience reflects research indicates that different workplaces reward particular gender appearances and practices. Kristen Schilt’s research on transmen at work, for instance, highlights the way that performances of masculinity get translated into workplace acceptance for these men. Yet doing gender in a way that calls into question its naturalness can put people (including those who do not identify as gender queer or tans) at risk. In Jespersen v Harrah, the 9th Circuit Court of Appeals held that female employees can be required to wear makeup as a condition of employment (in a workplace where men are not required to wear it).  While recent decisions have been more favorable to trans identified employees, most states do not have employment law or school policies protecting gender non-conforming individuals.  Simply put, most states do not have laws addressing —to use Coco’s language—gender expression.

For Coco, however, Warpaint is not just a project highlighting workplace gender bias, it was also about queer visibility.  Coco identifies as a queer femme woman.  On a typical day, she claims to fall somewhere on the third of fourth row of the set of images here (above). She artistically explores the ways that subtle changes in hairstyle, makeup, and clothing cause dramatic transformations in how others perceive her.  And while Coco’s more “femme” presentations helped her get a job, she also discusses the ways that those same presentations of her body worked against queer visibility.  As Coco put it: “I struggle with femme visibility and find it a little challenging to have the queer community recognize me to be ‘as queer as they are’ because of how femme I look sometimes” (here).

While gender identity and performance and sexual identity are not the same, gendered practices and presentations also signal membership in sexual communities, as Coco points out.  Often gender nonconformity is socially interpreted as a declaration of gay identity.  And, conversely, gender conformity is often “read” as straight.  So, gender conforming gay men and women and gender nonconforming straight men and women might struggle with visibility.  Mignon Moore’s research on Black lesbian communities addresses a similar set of struggles with gender expression and queer visibility.  Moore finds that the gender performances of the women she studied were strongly associated with sexual desires as her participants discussed finding gender expressions that elicited recognition and attention from desired audiences.  Moore’s research is concerned with these women’s experiences in spaces where queer recognition is desired and provides them with status and a sense of community and belonging.   However, queer visibility—as Coco’s experience looking for work attests—affords a different set of consequences in different kinds of contexts.

As Coco highlights, the movement between masculinity and femininity, as well as the grey area in between, can be accomplished regardless of the sex of one’s body. The story of Warpaint is not just artistic; it is also about the way that gendered performances signify belonging to (or being excluded from) a community.

[…] Masculinity, Gender (Non)Conformity, and Queer Visibility – An interesting look at how gender is performed and how it shapes someone’s perceived identity. […]

I'm read as hypersexual and straight, not gay and gender nonconforming

What to do with a Problem like Juan Pablo? | Inequality by (Interior) Design — February 5, 2014