What is China Doing in Jamaica? 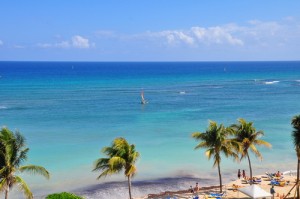 While writing this I am listening to the gentle ocean surf under a bright blue sky.  My wife and I are enjoying a lovely 2009 Valentine’s Day, along with hundreds of other Americans, some of whom came to get married on the sand to the gentle rhythm of the breakers and Reggae music in the distance.

I heartily recommend a Valentine vacation in Montego Bay to every American, but don’t wait very many years because Jamaica may become something like a province of China.

At the very time that the USA cannot afford the luxury of lavish foreign aid, China steps in and helps out our trading partners, as if they were altruistic and just trying to help. China, like America, tends to attach strings to its aid. The strings are trade obligations and implied allegiance.

Our current financial collapse stems from overdependence of the US economy on financial services rather than manufacturing and knowledge production. Financial services have, in turn, been over dependent on public addiction to needless consumption. Through all of this financial debauchery, China has been standing nearby like a bartender serving us drinks and taking our money.

As of this past November, China held almost $700 billion dollars in securities of the US government debt.  Foreign countries own $3 trillion of the U.S. treasury, but China owns more of that than any other country.

With our economy teetering on the brink, aid to developing countries inevitably will take a hit at budget time. It is a wonderful time for China to fill the gap and build “partnerships” with nations in our “backyard.” Jamaica is only a hundred miles from both Cuba and Haiti, and about 300 miles from Florida.

It would be a mistake not to note the long history of the Chinese in Jamaica. In the late 19th Century as thousands of slaves were shipped from Africa, a large number of Chinese were imported as indentured servants. Now Jamaica has an estimated Chinese population of 70,000.

China’s cozy foreign policy with the Caribbean since 1990 is no secret. Not only have the Chinese acquired important natural resources like asphalt from the region but they have had several military exercises there as well. China is Cuban largest trading partner apart from Venezuela. Caribbean nations see China as an alternative to heavy dependence upon the United States.

Fortunately, America sends more than tourists to Jamaica. The Peace Corps has sent 3,400 volunteers to Jamaica and over 100 are now stationed there. They continue to do wonderful things for the Jamaican economy, but they are not as visible as a convention center. Nor are they a match for the thousands of guns donated and sold by the United States to Jamaica and Haiti. In one year, 1999, alone, the USA sold Jamaica $5 million in military equipment.

If we want to preserve the beautiful vacation opportunities for Americans in Jamaica, we should stop the flow of guns and ratchet up the flow of Peace Corps projects ten-fold. Jamaica is in our own backyard, not China’s.

thank God almighty for china ,the world is looking and seeing things from another angle.all the billions of third world countries wealth are in western banks and they are the once aiding those corrupt leaders around they world just take a look at tonisia ,egypt ,nigeria ,just to name a few all there leaders have stolen government fund in the western banks .not in china or india so pls the world is waking up to know that it is not there leaders that is the problem but the leaders of the world who pretend to be saving the world on tv ,only to allow stolen government funds from poorer countries into there banks and later point fingers .is time the whole world should wake up and know that the western world are behind there poverty not just there corrupt leaders alone.

I wonder if our Jamaican Politicians care enough about its people, to have china send a type of farming peace corp to help, and show Jamaicans how to use our lands to feed our selves. Small farm acrages of rice,vegetables, self sustained chickens and pigs ect. They are able to feed themselves of over 1 billion people, and the worlds second largest food exporter.

Just finish washing Life and Debt, from the Jamaican Perspective, telling how cruel is the big brother USA...While US government's destroying Jamaica Economy, ordinary US citizen still thinking that they had done so much to help Jamaica...Wake up!

it is far too long that America as been under the disguise scoop, of being pretentious of their action and notions of Jamaica and its people.
with all the monies that were sent to Jamaica for the wellbeing of its people, was nothing more liken to the works of a shaster lawyer finding ways how to funnel monies out the country and throw pittance the people.
Right now there is hardly any thing in Jamaica that's viable for the country to sustain themselves from a economic fall if you remove the marijunana from the market. Some may argue-what about tourism? what about it I WOULD ARGUE BACK. How much monies or revenue does tourism generate in oppose to how much of that revenue actully stays and benefit the country, the well being of the mothers and their children who don't know where the other meal is comimg from. when the mothers have to sell themselves for pittance so they could sometimes feed her children and send them to school,the very least.THE GOVERMENT OF JAMAICA IS ALSO TO BE BLAME.