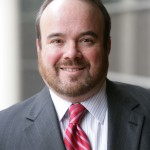 After wrapping up a public talk Thursday night, I was delighted to see political scientist Larry Jacobs smiling down from the screen above. On-deck as the next speaker in the series, Professor Jacobs has taught me a great deal about public scholarship. He’s in the news these days for Fed Power: How Finance Wins (with Desmond King), but he’s written powerfully and well on numerous hot-button topics as health care reform (with Theda Skocpol), public deliberation, democratic responsiveness, and US foreign policy.

There are infinite ways to be a public scholar, but Larry Jacobs’ example is instructive. How did he become such a welcome and trusted voice? Well…

(1) He is active and effective in engaging local as well as national and international audiences.

(2) Although he clearly has political views, Larry takes pains to offer a fair-minded perspective.

(3) Similarly, as a center director and leader of our local Scholars Strategy Network chapter, he invites speakers who don’t always agree with him (or with our faculty, or University administration, or each other).

(4) He is a prolific and respected national academic expert in particular specialties, but he has also developed the command and authority to speak to a broad set of public concerns.

(5) After cataloging these attributes, it almost seems redundant to note his boundless energy and willingness to make himself available on short notice.

With regard to the latter point, his advice for me was something of a paradox. When I asked how I could improve in on-camera interviews, he just said, “slow down, don’t rush, and have a nice conversation.”