It happened Sunday afternoon. I tried to avoid writing about it, not wanting to be distracted from the bigger picture or detract from what I thought—and still think—the most important stories and issues are. But it hasn’t gone away. With this morning’s headlines and so many references to the image I spent several years of my life researching and writing about, I think I have to say something.

I’m talking, of course, about how five members of the St. Louis Rams football team entered the stadium before their game this weekend with their arms and hands raised, enacting the “Hands Up, Don’t Shoot” pose that has become such a powerful symbol and statement for protesters in Ferguson, Missouri and all over the country.

Let me say, right off the bat, how much I respect and admire the Rams players—Tavon Austin, Kenny Britt, Stedman Bailey, Jared Cook, and Chris Givens—for what they did. Like their coach Jim Fischer, I defend their right to free speech. Perhaps even more than he can or would say, I celebrate their vision and courage, with respect both to their awareness and understanding of the broader social issues involved as well as to how they figured out a way to use their status as athletes to contribute to that conversation. Their use of the hands-up pose was a stroke of symbolic genius that allowed these men, who make their living with their bodies, to speak volumes without actually saying a word. I see them in the proud tradition of Tommie Smith and John Carlos, who in 1968 used the platform afforded them as Olympic champions to call attention to ongoing problems of race and racism in the United States. (Their clenched-fist, victory stand demonstration in Mexico City, the iconic image that has appeared in many media outlets over the past couple of days, is the inspiration and focus of my book Race, Culture, and the Revolt of the Black Athlete.) 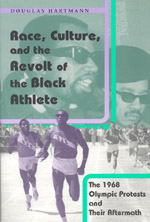 But lots of people don’t see it this way. Predictably, there has been a backlash against the Rams players, led or at least crystallized by the St. Louis Police Officer’s Association who called the gesture “tasteless, offensive, and inflammatory,” calling for an apology from the players and disciplinary action from the NFL. Some of these criticisms are driven by disagreements with the players’ views and perceived politics. I’m actually okay with that (though I’m probably more on the players’ side than the critics). In fact, a real, meaningful conversation about the incident and subsequent events and larger social and racial issues in and around Ferguson that provoked this demonstration in the first place would be a very good result. Yet that doesn’t seem to be what is happening. Instead, judging by their official statement, the police group seems to continue to see black people and bodies as a threat in need of constant management, policing, and control, all of which maps onto the dynamics between the NFL and its predominantly black workforce.

At a broader level, too much of the reaction to the Rams is driven by the sense that this display was objectionable because it was somehow out of place, because it occurred in the athletic arena. This really rubs me the wrong way, and not only because I firmly believe that athletes, like anyone else, have a right to their opinion and the opportunity to express that opinion freely and publicly. I get frustrated with this response because so often the sporting world is used and/or functions to promote, celebrate, rationalize, and legitimate all kinds of social causes, religious beliefs, and political issues—nationalism, military service, breast cancer awareness, the power of prayer and faith, etc. I don’t see why some social issues are allowed pride of place in the sports arena, while others are not, how some athletic figures are allowed to speak up and even spout off, while others are consistently chastised and silenced. There are clearly double standards often at work here, especially with respect to what is seen as protest or complaint against the mainstream majority.

One of the things that is driving me crazy about my various Facebook networks and Twitter feeds is that so many of the folks who have been critical of the Rams players are the same folks who have been calling for activists, African American and otherwise, to protest peacefully, to express their frustrations about Ferguson without resorting to violence and disorder. Isn’t this exactly what these athletes were doing? As John Carlos himself told the Associated Press: “I don’t think anyone got injured or shot by [the Rams players] expressing emotions.”

This morning’s news on this football affair has been driven by the question of whether there was an apology by the Rams or not, with the police folks claiming that “regret” had been “expressed,” while the athletes have refused to back away from their actions and statements. “Did they apologize or not,” were the breathless lines spoken by television reporters as they worked their way through the conflicting hashtags and tweaks. Although I’ve spent much of my professional life thinking about sports, race, politics, and social change, this is exactly the kind of side-show I was afraid of—where talk about athletes and symbolic gestures and official demands becomes the focus of the conversation. The result is that public attention, our attention, is deflected away from the real issues—the deeper social problems of police use of force, of racial disparities in the criminal justice system, of pervasive and persistent racial inequities in contemporary America, and the ongoing scourge of racism itself—that should be the focus of the still-unfolding stories and lessons and (hopefully) reforms coming out of Ferguson. But of course these deeper social realities are precisely what protestors and demonstrators and activists are trying to remind us of and keep our attention focused upon. Even if we don’t agree with their perspectives, conclusions, or suggested solutions, we would do well to honor their effort.

[…] Ferguson and Football on The Editors' Desk […]