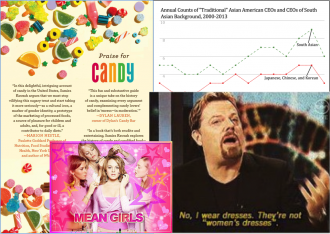 A tag-cloud for this week’s roundup might be astounding and jarring, since it runs the gamut from candy and cohabitation to affirmative action revision, diversity trends among the powerful, community health centers in Texas, and 20 years of remembrance in Rwanda. Herewith: what we’ve been up to this week.

“Trends at the Top: The New CEOs Revisited,” by Richie Zweigenhaft and Bill Domhoff. A look at who’s sitting in the corner office—or just outside it, nose pressed to the glass—reveals a new trend in diversity.

“How Recent Immigration Complicates Our Racial Justice Policies,” by Asad L. Asad. Should affirmative action be reformed to include newer, but still marginalized, groups within the U.S.?

“Samira Kawash on Candy,” with Kyle Green. The self-proclaimed @candyprofessor joins us for a look at the rise and fall and rise and fall—oh god, is this a sugar high?—of candy’s rep in American culture.

“Remembering Rwanda 20 Years Later,” by Rahsaan Mahadeo. Excellent sociological work on the Rwandan Genocide, the creation of genocide as an international crime, and the ways societies remember tragedy.

“So You Wanna Write for TSP?” by Letta Page. We always love new authors and new pitches; here’s how to make the most out of your idea+TSP so that you can get to 2getha 4eva.

“Popular Kids Get Bullied, Too,” by Molly Goin. Or, “Yes, Junior High is Lame, in Varying Degrees from Awful to Criminal, for Everyone.”

“To Cohabitate or Not To Cohabitate,” by Kat Albrecht. Good news for urbanites: living together before marriage (and certainly in lieu of it) is unlikely to raise your chances of divorce.

“The Struggle to Restore Voting Rights for Former Prisoners—And a Telling Success in Rhode Island,” by Michael Leo Owens.

“How Community Health Centers and Millions of Uninsured Are Hurt by the Refusal to Expand Medicaid in Texas,” by Jessica Sharac, Peter Shin, and Sara Rosenbaum.