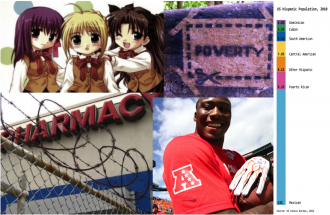 This week on TSP!

“Sociology in Retired Football Player’s Past,” by Doug Hartmann. He makes it sound so sordid!

“Texas Abortion Restrictions Take Effect,” by Jacqui Frost. New laws change the mechanics, but not the incidence, of abortion.

“Redesigning Work to Find Balance,” by Erin Hoekstra. U of M sociologists tell the Huffington Post that flexibility increases productivity—they’ve got the research to prove it.

“Angry White Men and Aggrieved Entitlement,” by John Ziegler. Michael Kimmel on the defenses that go up when unrecognized privilege is challenged. The Real World: White Male America.

“Are Job Training Programs a Good Way to Fight Poverty?” by Harry Holzer.