This month’s column features a guest-post by Adrienne Trier-Bieniek, Ph.D.: she critiques a recent pop culture debate and encourages us to question the impact of imagery and songs on healthy sexuality.  Trier-Bieniek is an assistant professor of sociology at Valencia College.  She studies pop culture, gender and healing after trauma; she also wrote the book Sing Us a Song, Piano Woman: Female Fans and the Music of Tori Amos (Scarecrow Press 2013).

A few months ago I was sitting in the Philadelphia airport waiting to fly home to Orlando when I got a Facebook alert on my phone.  One of my college friends had tagged me in a post, a news story, with the headline “Michigan University Removes Pendulum Statue.” What followed was an E! News article featuring a large wrecking ball that hangs in the campus of my alma mater, Grand Valley State University.  The ball was being ridden by a naked person, seemingly an imitation of Miley Cyrus in her video for her song Wrecking Ball where she sings about heartbreak while naked and swinging on a wrecking ball.  As I read through the short blurb what struck me (beyond the naked student) was E!’s statement that “Miley Cyrus, the tongue flickering demon… Has set her sights on your college students!”  This was probably meant to be tongue in cheek (pun intended), but the message was clearly connected to the dangers of feminine sexuality. 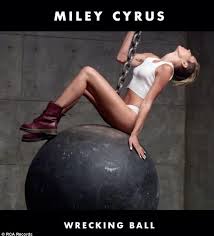 A few days later, Sinead O’Conner wrote an open letter to Miley about the music industry’s penchant for over-sexualizing female pop stars and kicking them to the curb once executives have made their money.  This lead to an exchange between Cyrus and O’Conner in which Miley Cyrus attacked Sinead O’Conner’s history of being treated for bipolar disorder and her attempts at suicide.  Then Robin Thicke appeared on Oprah’s Next Chapter to discuss his performance with Cyrus at the performance with Cyrus at the Video Music Awards (VMA’s). In case you are not familiar, the routine included Miley Cyrus wearing a gold two-piece outfit, seemingly to make her appear close to nude, while “twerking” in front of Thicke’s groin while also getting sexual with a foam finger.  Thicke said that, when he is performing, he doesn’t pay attention to who is touching his body because he is focused on his music and vocals.

I study gender and music and I have spent a lot of time thinking about this series of events and their connection to sexuality and body privilege.  No doubt the video for Wrecking Ball was created to get Cyrus some attention, it couldn’t be more obvious that she was literally shedding the image of Hanna Montana as she swung on the ball.  Yet there was a vulnerability to the performance that got lost in the reaction to her appearing naked.  Most people seemed to be so caught up in gazing at her body that the expression of loss and heart-break she sang about was missed.  Perhaps this is just the media doing what it does best, finding the most alluring part of a story and exposing it.  Or, maybe the reactions to the song are found in the age-old assumption that nudity, particularly nude women, are objectionable.  Except, in 2013 women’s nude bodies not only battle the puritan stance on nudity, they also are attacked with judgments on weight, symmetry, skin color and expectations of perfection.

Sinead O’Conner is right, the music industry sets up young and attractive people in order to cash out on their youth and beauty.  It creates a standard for what young women must do in order to get noticed and to keep the audience’s attention.  Thicke’s comments about not noticing how sexual Cyrus’s dancing was at the VMA’s demonstrates a privilege that is specific to masculinity and male bodies.  How can he not realize that there is a half-naked girl grinding on him?  I find this hard to believe. What Thicke did in this moment was affirm that Cyrus’s body was the object and the subject of the performance and that his body didn’t need to be a part of the discussion.  This is a privilege granted to the person in power, most women who are performing cannot escape the objectification of the male gaze.

While I am not sure if Cyrus should be flattered by people riding naked on a wrecking ball at my alma mater, I will give them the benefit of the doubt and assume that a handful of them were hoping to connect with the vulnerable side Cyrus showed in the video.  Later this month, when I return to campus to speak, I hope to find out if this is true. Much like the famous feminist mantra that floats around “If I had a hammer I would smash patriarchy”, in this case what we need, ironically, may be a wrecking ball.