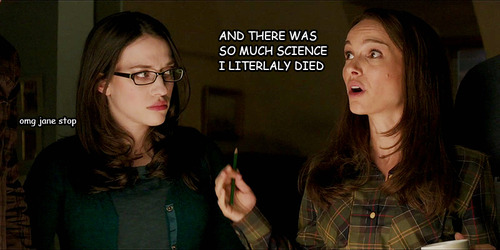 I’m not sure when I started writing without capital letters or punctuation. I think it might have been in part because of my younger sister (who is a linguistics major) and our conversations via IM – and God, doesn’t that make me feel old to type, yes I learn how to be cool from my little sister – simply because I felt weird not doing it when she was. But I know she wasn’t the only one; I was seeing it in a lot of other places, especially at the various social media locales in which I do internet business, and there was something about the smooth, ironic casualness of it that appealed to me.

This was post-lolcat, I think. So it wasn’t the first time I’d noticed internet culture screwing with language in really creative, subtle ways. But it was the first time I noticed it snaking into my own vocab that way.

Now it’s something I don’t think twice about. It’s just another tool in my linguistic toolbox.

The thing is, I’m a writer, and I fancy myself a pretty good one. Most of the people I know who make use of this kind of style are also amazing writers, not people who are generally inclined to be lazy in their communication. I’m certainly not; whatever stylistic decisions I make in my writing, from fiction to essays to Twitter, are made with a purpose.

What first got me really wondering about this was noticing what I found especially funny in written humor, what tended to make me lol harder. And what I discovered was that it appeared that I was literally tickled by absent capital letters and punctuation, by misspelled words. Streams of ironic verbiage were funny to me because of their content, but also because of their presentation, and I couldn’t recall ever feeling that way about language before.

I’ve been asking around, talking to colleagues and friends, and I’ve gotten some very interesting responses. Among other things, there seems to be a consensus that irony is a crucial aspect, that there are very nuanced shades of connotation and tone being conveyed by what, at first glance, appears to be merely bad English. I think it’s not merely irony, but absurdism, which is a fundamental element of a lot of humor, and a kind of humor at which digital culture seems to excel. Twitter especially, given the versatility of the platform and the tight constraints on length, which I believe lends itself to tightly compact, dense messages that especially odd and creative people find fun to work with (for some examples, see this Buzzfeed article on “Weird Twitter”). 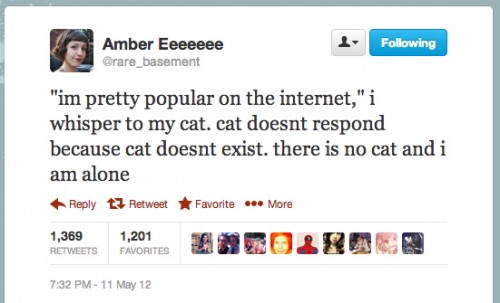 Like any style, there are contexts in which it’s especially useful or appropriate and times when it’s less so. I have a very small, non-representative N here – I’m only speaking from my own personal experience and what I’ve heard and seen from people I know, many of whom obviously conform to certain specific categories of identity. But when I asked my fellow Cyborgologists about this, David Banks suggested that one of the things this stylistic quirk might represent is a form of code switching, of altering communication patterns according to the context in which the communication is occurring.

My own experience backs this up, I think, especially considering what I mentioned above with my sister. In addition, I’ve noticed that when I’m talking with her about something more serious, my English formalizes and punctuation reappears. This wasn’t a conscious thing at first, but I can’t stop noticing it now.

What this indicates to me – and one of the things I love about it – is that what stuffy English teachers would be horrified by has become a powerful, interesting, nuanced style of writing unto itself, homegrown on the internets. I recall – and I imagine you do as well – all the panic a while back (a lot of which remains) about how communication on the web and via text message was going to destroy language skills in those damn kids with the clothes and the hair, that it was going to ruin people’s ability to communicate coherently at all. But here we are, and “bad” English is doing a very important job in a way that really didn’t exist before.

A recent and pretty terrific article on The Atlantic’s site deals with the evolving grammatical conventions around the use of “because”, the “prepositional because”. Or in other words, “because” is changing because internet.

I can clearly only speak about English here – something I regret – and I would love to know if other languages on the web are going through similar processes. Mostly I’m just pleased that this is getting attention, and I want to see it get more. Things like this help erode the intensely silly idea that cultural change that occurs via the web is somehow illegitimate, or stupid, or not worth paying attention to at all. 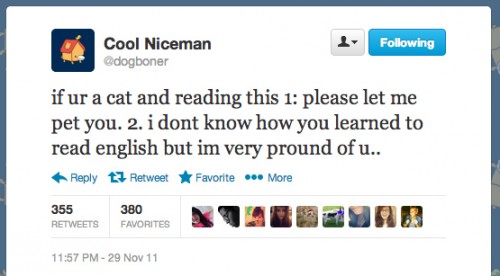 (Correction: I had credited PJ Rey with the code switching suggestion; it was actually David Banks)

[…] Internet Linguistics and ungrammatical language is awseome u guys srsly […]

Love this, Sarah!! I just recently had a great conversation with a colleague whose field site is in China, and she explained how native Chinese language speakers on Weibo play with tones to construct at times playful, but also politically charged messages that avoid censors (e.g. mama can be either horse or mother depending on the emphasis). It would be interesting to know the degree to which this seeps into everyday speech

Love this post! This is certainly happening in Russian/Ukrainian, similar in some ways, different in others. A to of the things you mentioned ring true, and on top of that you have linguistic appropriation of both terms and tactics from English (the words, but also what you do with them), which remains the main language of the internet. I wish I could write about this with more cohesion and be able to fully convey all the meanings and nuances, but I don't know if I can. Certainly worth a try some time.

I have a poet friend who consistently weathers editorial flak for his use of ampersands. And yet, such is perfect for his style.

I don't think we should be scared away from orthography play just because such things pull at the seams of language in frightening ways. Being tested to distinguish posters who doesn't know their there from their from they're from a skilled craftsman might be a little unnerving, but it is no reason to condemn the challenge. We purchase thought with time, so all is fair. No reason to halo James Joyce and close the door on experimentation (personally, I like verbing nouns).

A note on a foreign language. I live in Georgia (the country) and in the Georgian language there are no capitals, and what we'd call run-on sentences in English are the grammatical norm. So, reading their English (I teach English)is... interesting. While spelling in English is simply difficult, the use of the Latin alphabet in Georgian transliteration really distorts the way the kids think about English sounds. While I read Georgian well, I cannot understand my students' Georgian in the Latin alphabet (i.e., their Facebook posts). There is a Georgian tongue twister which serves as a good example: "ბაყაყი წყალში ყიყინებს," "baqu'aqu'i ts'qu'alshi qu'iqu'inebs," "The frogs croak/sing/call in the water." The apostrophes in the transliteration represent glottal stops. For each unaspirated sound, there is an aspirated equivalent which would be transliterated the same, only without the apostrophe. However, there is no standard transliteration, and Latin characters are stretched, switched, and shuffled around in a ridiculous number of ways.

When the Latin characters are returned to English, it makes for interesting results upon which I won't elaborate here (these prepositional formalities become increasingly tiring for me; the shift is constant). While it is a change in a very different sense--bad English, yes--there is still a fascinating cultural foundation to it. Yes, I teach English and try to work on these things, but I enjoy reading the jumbled sentences and the Joycean phrases which often chance their way into an assignment.

[…] at 11:30 on November 29, 2013 by Andrew Sullivan Sarah Wanenchak thinks meme-speak is revitalizing the language: [O]ne of the things I love about it is that what stuffy […]

From my observation, one of the first things people do in every language online is to figure out how to LOL. English has haha, Spanish jaja and Thai has 5555 because 5 is pronounced ha.

Jana Harvey did her doctoral dissertation in Linguistics at Ball State University in 2007 on the use of Tok Pisin on the Internet. Tok Pisin is a creole that is one of the national languages of Papua New Guinea. It's an interesting study of how speakers of Tok Pisin adapt the language to a text-based environmnet.

[…] ignoring you – but also through emoticons, gifs, countless numbers of memes, “poor” spelling and grammar, and any number of other things that may be internets-wide or just existent within small social […]

[…] you don’t know me! Post-LOLcat lingo! Currency, privacy, and competing […]