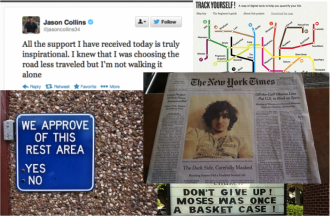 End the Semester Right: With a Movie

What’s that you say? You’re swamped, your students are swamped, and everyone needs a chance to coast into summer? Final papers, class reflections, formal and informal evaluations—there has to be a better way!

There is, and I believe we all know it as: show a danged movie. And here at TSP, we like to provide inspiration. At the bottom of today’s roundup, there’s a list of 56 documentaries and other films that have been recommended to us as excellent fodder for crim, soc, social movements, gender, media studies, and every other class you might be teaching or taking. To learn more, visit this interview with Jessie Daniels and its extensive comments with suggestions from other profs and students (many with links) or this older post with some more good choices.

Now, here’s what we’ve been doing as the semester winds down:

“One More Shout-Out for Ethnography Article,” by Doug Hartmann. Why that Atlantic article was so very, very good.

“An Opinion on Public Opinion Polls,” by Carolyn Lubben. Herb Gans in the Neiman Journalism Lab on why public opinion reports can be awfully misleading.

“Feeling Good with God,” by John Ziegler. You guys, we found the perfect picture for this piece on mental health and religiosity.

“David Leonard on Jason Collins,” with Kyle Green. Gender, sport, sexuality, media, stigma, this interview has it all.

“Why Autonomous Social Movements Hold the Key to Reducing Violence Against Women,” by S. Laurel Whedon and Mala Htun.

“Black Politics and the Origins of America’s Prison Boom,” by Michael Javen Fortner.

And now, the Movie Pile:

Sorry the numbering is all effed up on the films; I can't figure out what's wrong with the code and realized that no one really cares about the numbers anyway. Please, enjoy all of the 7s! Have you seen our 2s? So much to enjoy, really.