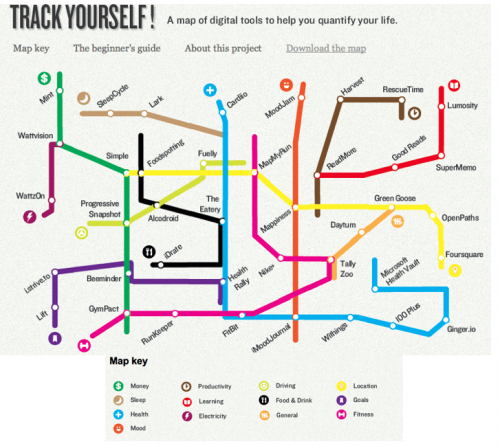 Let’s play a guessing game: How far do you have to read before you can guess what I’m describing?

To begin, it’s both an organization and a group of people. It’s quite large; over a million people participate. They don’t all participate together, though; rather, they meet up regularly in much smaller groups, in cities all over the world. Participants are almost all doing some kind of self-tracking, which usually includes things about their bodies, their activities, what they eat, and sometimes how they feel. When the smaller groups get together, meetings include both presentations and time for participants to get advice from each other about their self-tracking projects.

If you’re a regular reader of Cyborgology (or someone I’ve talked to about my dissertation project), you might think I’m talking about Quantified Self—and that would not be an unreasonable guess. But in this case, the group I’ve described isn’t Quantified Self; it’s Weight Watchers International. Started in 1963, Weight Watchers now boasts 1.3 million members who get together in 45,000 cities spread across more than 30 countries. At minimum, all Weight Watchers participants are tracking their weight; most also track their physical activity and what they eat using a points system (though Weight Watchers does offer a “no food tracking” plan), and many members track other variables such as body measurements or how full they feel after different meals.

It would seem that Weight Watchers could make a good case for being “the original self-tracking meetup group,” and yet I’ve neither seen nor heard of anyone presenting their Weight Watchers data at a Quantified Self show-and-tell (if you have, please let me know). The closest I can come is a flier I picked up at the 2012 Quantified Self Conference in Palo Alto, CA last fall (#QS12), which was promoting a doctor’s “office hours session” (informal small group presentation/discussion) on what he calls “Manly Dieting.” I could spent a whole post going on about the phrase “manly dieting,” but for now I’ll just say this: The fact that “manly dieting” needs to be specified-as-such indicates that “dieting,” generally, is more commonly associated with women, and I’m starting to think there might be a connection between the gendering of “dieting” as “female” and the fact that I haven’t personally seen a lot of straight-up “dieting for weight loss” presentations within Quantified Self.

Another topic I’ve neither seen nor heard of at a Quantified Self show-and-tell (and again, please let me know if you have!) is fertility tracking. This was first brought to my attention by a woman I met at #QS12, who was tracking her ovulation and menstruation as a fertility patient trying to conceive—but who was attending #QS12 for professional purposes as an observer, not as someone engaged in self-tracking. A conversation with danah boyd (@zephoria) drove the point home further still: as she writes here, both “dieting” and “fertility tracking” are very much gendered “feminine,” which contributed to why she resisted those practices even as she “got obsessive” about tracking both what she was eating and some of her hormone cycling. boyd thinks the feminine gendering of “dieting” and “fertility tracking” plays a role not only in her own initial resistance to such practices, but also in their seeming absence from Quantified Self—and I’m strongly inclined to agree.

So…what’s going on with gender, the gendering of various self-tracking practices, and Quantified Self? It’s not that there are no women in Quantified Self. Although there’s no concrete data on Quantified Self membership overall, Ernesto Ramirez (@eramirez) helpfully pointed me toward a demographic survey of the New York (city) QS Meetup group, which found itself to be 67% men and 33% women. That’s not an even gender balance, but it does suggest that women are a strong minority. Yet, we shouldn’t make the mistake of assuming that only women might be interested in practices gendered as “feminine,” nor should we assume that women would automatically be interested in practices gendered as “feminine”; as boyd aptly demonstrates, sometimes women strongly resist feminized practices!

Tomorrow afternoon, I’ll be leading a breakout session at Quantified Self Europe 2013 (#QSEU13) called “The Missing Trackers.” As I often tell people when I’m explaining my dissertation research, Quantified Self may be at the forefront of a new wave of self-tracking; yet, as far as self-tracking generally goes, Quantified Self is just the tip of the iceberg. Doctors (for instance) have been asking patients to self-track variables like blood pressure, blood sugar, and even mood since well before Quantified Self started in 2007; while one of the things I find most interesting about Quantified Self is the number of people who are doing what I call self-directed self-tracking (aka, self-tracking they’re doing because of their own interests, not because someone else asked them to do so), plenty of those practices predate Quantified Self as well. (Example: when they redid the walls in their kitchen, my parents saved a strip of horrible orange-yellow-green wallpaper from next to the doorway, where my younger brother and I had eagerly recorded our increasing heights as children.) And of course, let’s not forget that not all self-tracking is quantitative, even within Quantified Self.

Given all of this, who’s probably self-tracking but not doing so as a part of Quantified Self? What can we learn about Quantified Self and the people who are a part of it by noting what kinds of people aren’t a part of it? What about who attends QS Show & Tell sessions vs who presents at them? Are these absences or differences in participation problems, or merely things that are? If they are problems, what can or should be done about them?

Check back next week, and I’ll let you know how #QSEU13 answers these questions.

Whitney Erin Boesel is presently in Amsterdam for #QSEU13, but she’s still on Twitter when she can find an unlocked wireless signal; she’s @phenatypical.

Alcoholics Anonymous began in 1935. Certainly self tracking is part of its method.

Oddly, the demographics of AA in US and Canada is 65% male and 35% female - quite close to the group you mention. http://en.wikipedia.org/wiki/Alcoholics_Anonymous

BTW I guessed WW at "all over the world".

has always struck me that everyday things like "number of likes on my Facebook photo" are some of the most common forms of quantified self, but rarely if ever included in the lists. i think theorizing on self quantification shouldn't be so overly fixated on the Quantified Self group, in the same way that social movement theorizing tends to be so obsessed with Social Movement organizations.

I have never heard of Quantified Self before, but I do a lot of self-tracking and I have friends who do. Like Fitocracy/fitness, tracking diet, menstruation, etc. I'm probably similar to QS people, I guess, because I like tracking things, but I've never heard of it before in my life.

I'll be interested to see what you find at QS13. Many people, of course, may not use the term 'self-tracking', must less 'the quantified self' to describe activities that may well be interpreted as self-tracking. The Pew Research Center took this into account when they were attempting to quantify how many people in the US engage in self-tracking, and included activities such as using a pen and paper or simply remembering into their definition of self-tracking. And then, of course, there are the famous special pair of jeans, talked about by Susannah Fox, that act as a marker of how much weight one has lost or gained when one tries them on. It seems to me that people who see themselves as part of QS and attend meetings are more towards the digital technology side of self-tracking: hence the gender/age imbalance.

[...] the sake of continuity, I’ll start this first post by picking up where I left off last week. On the first day of this year’s Quantified Self Europe, I hosted a breakout session [pdf] [...]

[...] the session which I missed all of but the last 10mins was, the missing trackers by Witney. Looking at the notes it was a very interesting discussion about the ethics of self tracking and [...]

[...] readers will recall that I attended QSEU13 last spring in Amsterdam, and that it was a pretty incredible experience. As QS co-founder Gary [...]

By Whom, For Whom? Science, Startups, and Quantified Self » Cyborgology — October 17, 2013

[...] not only came back to that conversation, but also returned to some of the questions that came up in my QS Europe 2013 session about who is and isn’t a part of the Quantified Self community—and sparked an at times intense [...]