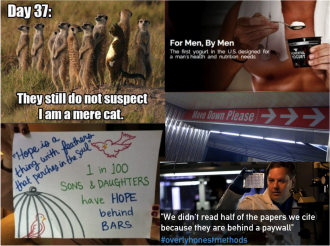 Now, on to the Roundup! Please add your proofing tips in the comments. I always need mre. More. Ugh.

“Juvenile Lifers, Learning to Lead,” by Michelle Inderbitzin, Trevor Walraven, and Joshua Cain. In which two inmates and their professor write about the experiences of those sentenced to life in prison before they could vote, buy cigarettes, or rent a car (let alone the hat trick), and how they work to grow into leadership behind the walls.

“Facebook and the Freshman Experience,” by Doug Hartmann. In which a man all-too-familiar with college freshmen recommends some reading.

“Making Dairy Manly,” by Andrew Wiebe. In which, taking a cue from an old Conan sketch, a company tries to alleviate the terrible embarrassment suffered by all XYers in the dairy aisle.

“Movin’ on… Down,” by Evan Stewart. In which housing mobility takes a turn for the worse and Evan gets to show off his skill with song lyrics.

“Shai Dromi on Beggars and Morality,” with Kyle Green. In which pleas for spare change spur introspection.

“Beggars & Morality,” by Kia Heise. In which Heise shares a series of questions to stimulate classroom discussion on panhandling and sociological observation.

“What Can U.S. Presidents Accomplish in a Second Term?” by Daniel Paul Franklin. Obama: take notes.

“Do New Communications Media—Like the Internet—Hurt Individuals and Society?” by Joli Jensen. Is all that hand-wringing worth it? I mean, you’re going to need so much moisturizer.

*NB: This column does not have a proofreader, unless you count a rather needy rat terrier that just took the “z” key off the laptop in an attempt to write some sort of doggie manifesto. Please, be kind.

Letta -- love the 'read it backwards' tip. I teach that to my students and urge them to use it on my tests -- read my questions backwards. Forwards, there is a flow to them, which may or may not make the questions correct, but backwards, they have to stop at nearly every word.

Those who try it, swear by it!

Letta -- trying to distance myself from my writing is hard, so time works for me. I try to leave something for 10+ days if I can before trying to self-edit. This is old advice; I have read it/heard it many times, but where the advice really "got" to me was when Stephen King talked about this in "On Writing."