The full stated goals of #f2c are as follows:

F2C: Freedom to Connect brings under-represented people and issues into the Washington, DC based federal policy discussion to promote Internet freedom, to preserve Internet values such as public protocols and universal connectivity, and to promote the use of the Internet for people-oriented purposes.

After the wonderful experience that was Theorizing the Web 2013 (#TtW13) I rode my beloved Amtrak to the DC Metro area just as the second panel was starting.  #f2c was a memorable experience in part because of its proximity to #TtW13.  Whereas #TtW13 presenters make subtle and extended critiques of surveillance in both medieval and modern cultures, #f2c presenters are more interested in governments’ new capacity and interest in surveilling the Internet. I got the sense that, left to its own devices, the Internet is inherently a hierarchy-free, democratizing force. It can deliver us from tyrannical governments and greedy corporations so long as all connections are treated equal and the market provides those connections at cheaper prices and faster speeds: We are only as equal and free as the packets that carry out ideas. 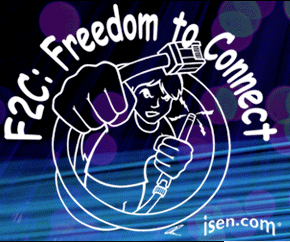 This optimism is undergirded by what PJ Rey (@pjrey)  has called “The Myth of Cyberspace.” The idea that the Internet is a great equalizer: a place where all people are free to connect and transcend old hierarchies and arbitrary barriers. The myth is derived from the metaphors used to describe the early Internet as a far away place separate and distinct from the physical world which contains gender, race, class, and embodied meaning. The Internet is presented as a tabula rasa on which totally new social relations can be formed from whole cloth. This is simply not true. As PJ Rey writes, “ The Web reproduces existing social norms and geopolitical divisions more than it defies them; it is characterized by redundancy, not transcendence.” Nowhere was this more evident than at #f2c itself. The conference claims to bring together “under-represented people,” but I soon realized that my working definition of what constitutes “under-represented” was much different from that of others in the room.

While the problem of inclusivity goes well beyond a simple headcount, the numbers are worth mentioning. Of the 38 or so speakers, there were only four people of color and nine women. Half of the people of color that presented were mistakenly identified as another person after their presentations. I was mistaken for Ben Huh (@benhuh) the CEO of the cheezburger.com network (I am white.) and I later witnessed a middle aged white man mistake a black man in the reception area for the attending blues artist Lester Chambers. When the mistake was pointed out, the white man said, “Well, you two look a lot alike.” He looked nothing like Lester Chambers. Microaggressions such as these are nothing new, nor are they uncommon and that is exactly the point. A conference that claims to bring in unheard voices would serve itself well to actively diversify its attendees.

Which brings me to Derek Khanna (@derekkhanna).  As far as I can tell, Derek cares passionately about two things: 1) Americans being able to unlock their cell phones and 2) eliminating affirmative action in college. He goes out of the way to brag about his triumphs in this arena in his speaker bio:

Derek has a long history of trying to reform politics. While at his alma mater he led a campaign that successfully overturned an affirmative action system that he argued violated the Constitution…

The very existence of Derek at #f2c puts a chilling effect on the purportedly democratic and inclusive nature of the conference. I understand that many people have extremely nuanced opinions that bring them to the conclusion that affirmative action is bad or even counterproductive to its stated goals, but one must recognize the unintended consequences of proudly proclaiming such views when they are not at all germane to the topic of the conference. Getting yourself fired for penning a controversial memo on copyright law does not make you a freedom fighter or a champion of free speech. It just means you chose the wrong employer. To hold up the removal of affirmative action an example of “reforming politics” in the name of the Constitution does not create a safe space for the unheard or under-represented.

I do not want to make it seem as though #f2c is just one Donald Trump toupee from looking like CPAC. #f2c is an excellent conference and most of the attendees are doing excellent work with municipal broadband, online activism and copyright reform. The decisions made and ideas exchanged at past #f2c conferences have probably had more influence on yours and my access to the Internet than I will ever know. I know that. My criticisms, ultimately, come from my own dedication, passion, and academic interest in the same issues that #f2c fights for. We have never been totally “free to connect” and that holds true for some more than others. Fighting for the liberty of workers that build our devices and does more “to promote the use of the Internet for people-oriented purposes” than a thousand jail broken iPhones.

“Public protocols and universal connectivity” can refer to social as well as technical systems. TCPI/IP and mutual aid serve similar ends: to make a decentralized, robust, and scalable network of peers. Universal connectivity can just as easily refer to breaking the glass ceiling as it does net neutrality.  I saw an acknowledgement of this in the wonderful talk by Sascha Meinrath (@saschameinrath) (he’s the “a garage hacker-turned-million dollar project director” mentioned earlier) on the genesis of Commotion Wireless. The full video is below, but I particularly liked what he said about the social and economic agendas of the past 50 years. He states,

“…civil society realized that the most efficacious route to better our country was through civil disobedience. And today who we hold up as champions of that era, from Rosa Parks to Malcolm X we believe that they did the right thing by being a part of a sophisticated, nationwide, and purposeful intervention. And today, a half-century later, I would say we have a similar responsibility to push that envelope. To demand access to our public airwaves, to engage in electromagnetic jaywalking writ-large.”

Meinrath isn’t equating SOPA with Jim Crow, rather he is making a link between the tactics of both movements. And while the hints of mild digital dualism can be sensed, he later acknowledges that his young daughter and many like her will not distinguish between the online and offline components of their lives. That to make “purposeful interventions” in augmented reality will require tactics that are updated and tuned for the current technosocial environment.

Ultimately I blame my own discipline for this failure of inclusivity. Science and Technology Studies (STS) not only has its own demographics problems, it also does a bad job of getting its findings implemented or noticed by practitioners. The recent advances in critical making and appropriating technology are excellent starts, but they are not actively working to reform or revolutionize industries in the way that #f2c aims to do. Collaboration between these realms could produce very interesting results.

I still believe in the old saying, “another world is possible” but I think it requires a lot more praxis than either technologists or social theorists have been willing to try in the past. We won’t always agree, and there will be times that one makes difficult demands on the other. (For example, I would ask Alexis Ohanian if he thinks both Violentacrez and Columbia Records are oppressors of a free society.[1]) If social theorists knew a little bit more about the technical and legal workings of the internet, and technologists knew just a little bit of social theory, we could improve both professions immensely.

I’ll end with a small request: That the organizers and sponsors of Freedom To Connect consider “Social Justice and Liberty” as next year’s theme. That they invite speakers who understand that widespread bigotry and rape culture are just as big if not bigger barriers to a free and open Internet as over-zealous copyright laws and bandwidth caps. I understand that only so much can be covered in any single conference, but the kind of exchange of knowledge that I am proposing can only make for more informed and more socially just decision-making. Let’s build an Internet for everyone.

[1] Ohanian was there to introduce Lester and Dylan Chambers. Lester Chambers, as part of the band “The Chambers Brothers” had never received payment from Columbia records despite their album going gold.

[...] Cyborgology. ”It’s as if a TED conference smashed headfirst into a hackathon and then fell into an NGO strategy summit.” “Okay, so let’s get it out front that we all have a lot of feelings about stuff.” “It might be fun to play Thoreau and sit in judgment of what the Internet does to people, but I’d rather be a cyborg than a romantic.” [...]