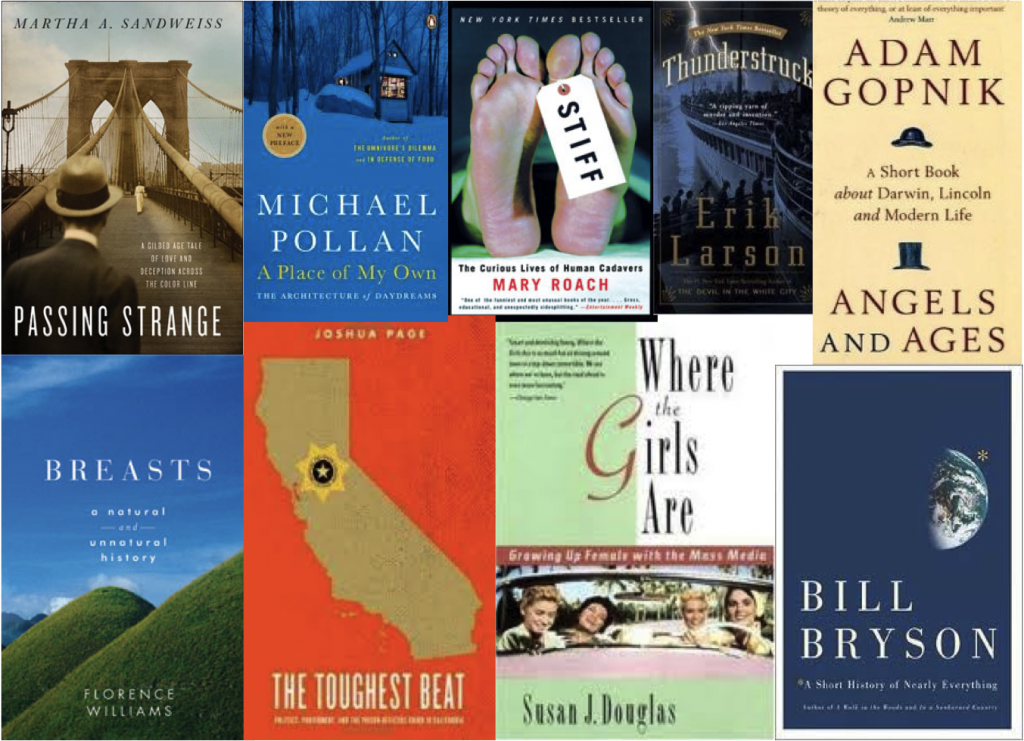 In case it’s hard to tell, that’s an imperative, not a descriptor. Today I plan to use my little soapbox to trumpet some fabulous writing, while also seeking submissions to what I lovingly call “Letta’s List.”

See, many authors ask me for examples of how to incorporate a lot of information into something that’s thorough, academically sound, and engaging. It’s a tough balance, to be sure, but over the years, I’ve collected a number of books (and this is by no means a list of all of them) I can hand off as representations of that ideal. They likely have nothing to do with your area of study, but watching the authors’ deft hands at work (and knowing there are surely unsung editor elves in there, too) can be a truly enjoyable homework assignment. Think of it as authorial excellence by osmosis. Absorb and emulate.

And then, leave me your list of rockin’ non-fiction in the comments, because Letta’s List is in no way complete. I want it to grow longer every year (which isn’t to say this isn’t already long; skip it if you just want the roundup!). Links go to the presses’ sites wherever possible. Note to those authors and presses prepping to send me book copies: please send paperbacks! Also: thank you.

What, you ask, have we been doing on The Society Pages this week? Well, I can tell you that, too. Again, though, let me urge you to share your best examples of gripping non-fiction, especially those books that share science (social or otherwise) in a publicly engaging way, in the comments.** I need to add to the list!

“A Social Welfare Critique of Crime Control,” by Richard Rosenfeld and Steven F. Messner. In which we learn about managing criminal motivations and opportunities and how we might be able to get to a crime-free society, but it may not be worth it.

“Service with a Smile—Or Else,” by Evan Stewart. In which Hochschild’s notion of “emotional labor” is employed among employees.

“Migrant Health in the Debate about Immigration Reform,” by Micah Gell Redman. Citizenship has very little to do with the public health risks and benefits of each additional member of “the herd.” Why the U.S. should be paying attention to everyone‘s health.

“What the Proliferation of Recognized Mental Disorders Means for American Healthcare,” by Owen Whooley. With the DSM V,  “Disruptive Mood Dysregulation Disorder” is now a thing. Asperger’s Syndrome is not. What gives?

**P.S. Please, please add your favorites in the comments? No comments=lonely editor.

I immediately regretted not adding "The Immortal Life of Henrietta Lacks," by Rebecca Skloot! Amazing reporting, from the science of the era to the politics of race, renumeration, and regret.
http://rebeccaskloot.com/the-immortal-life/

LOVE Bill Bryson and Mary Roach. I'd like to recommend anything by Nicole Rafter, especially "Partial Justice" and "The Criminal Brain." I recently read and loved Dave Quammen's "Spillover", which is about the epidemiology of zoonotic diseases, and now I'm reading "Infections and Inequalities" by Paul Farmer.

there was a really cool book about dubai a couple of years ago... i forget who wrote it. me?

"Plutocrats:The Rise if the Global Super Rich and the Fall of Everyone Else" by Chrystia Freeland and Joseph Stieglitz "The Price of Inequality" are my two most recent NF reads

One more Bryson book I should have pointed out is his endearing little tome Bill Bryson's Dictionary of Troublesome Words: A Writer's Guide to Getting it Right. It remains desk-side, stacked with my many various style guides, the Oxford American Writer's Thesaurus, and a stack of random magazines.
http://www.amazon.com/Brysons-Dictionary-Troublesome-Words-Writers/dp/0767910435