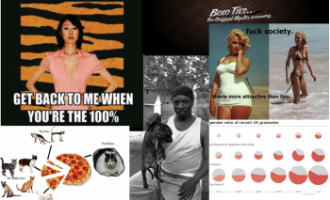 2012 is over, and as we looked back at what The Society Pages accomplished in that span, we realized there’s no way to choose a “Best Of.” Other sites might be up to the task, but here we’d be weighing so many factors that the results would be somewhere between utterly irrelevant to most readers and totally gut-wrenching for us. And since we do our best to avoid gut-wrenching anything, instead we’re offering up a list based on one very simple metric: the most popular post published in each area of our site this year. That is, what got the eyeballs. These might be controversial, weird, the beneficiaries of 12 months of results rather than 1 (if they happened to be published in December)… who knows? Let’s find out together. Thanks for your support, comments, readership, and curiosity!

Special Features: “Documentaries for the Classroom,” with Jessie Daniels.

Editors’ Desk: “Altruism, Ants, and E.O. Wilson,” by Doug Hartmann (oddly edged out juuuust slightly by a post about my own editorial and sartorial style by Chris Uggen. Executive decision to skip to the real content; personal realization that I can’t even bring myself to lie about stats on the Internet.)

Reading List: “Breaking Up Is Actually Hard To Do,” by Sarah Lageson.

Scholars Strategy Network: “The Uneven Representation of Women and Minorities in America’s State Legislatures—And Why It Matters,” by Beth Reingold.

Graphic Sociology: “Race and Gender in Higher Education—Who Gets Degrees?” by Laura Noren.

A Backstage Sociologist: “Karl Marx’s Comments on Mitt Romney’s Theory of the 47 Percent,” by Monte Bute.

New Books in Sociology: “Phil Zuckerman, ‘Society without God: What the Least Religious Nations Can Tell Us about Contentment,‘” by Annie Sepucaia.

Public Criminology: “A Broader Based Approach to Shootings,” by Chris Uggen.

Sexuality and Society: “The Price(s) of Pleasure in the Classroom: The Appalachian State University Controversy’s Relevance to Sex Workers,” by Jayne Swift.

The Color Line: “It Was Inevitable: Racial Ignorance against Jeremy Lin,” by C.N. Le.

ThickCulture: “Away from a Sociology of Hipsters,” by Andrew Lindner.