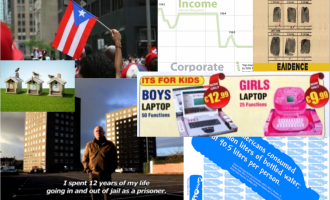 So, this week, I heard an interesting piece of advice for writers, and it’s been knocking around in my head. Here’s the thing: it’s great, pithy advice. And it’s obviously sexist. So here’s the adaptation at which I’ve grudgingly arrived: “When writing an essay, think of it like shorts. You want ’em long enough to cover the business, and short enough to keep things interesting.”

No matter how dumb the set up, the point is still well taken, and it’s one we employ rigorously on The Society Pages. This is an independent online publication—theoretically, we have all the room in the world and no one to tell us we have to rein it in. Letting ourselves and our authors ramble too freely would, however, defeat the point. Thus, I’m happy to present a set of well honed, concise articles from this past week. You’ll get a tour of what’s on the minds of social scientists, hopefully stripped of unnecessary jargon and pointless pontificating (my intro aside).

“Puerto Rico: 51st State or Harbinger of U.S. Decline?” by José Rámón Sánchez. In which Sánchez takes a closer look at the much-heralded “statehood vote” in Puerto Rico and finds it’s not so much about statehood as economic woes.

“Law Enforcement and Science with David Harris,” by Sarah Lageson. In which law professor David Harris discusses why law enforcement agencies are so reluctant to adopt and refine scientific techniques, and what social scientists can do about it.

“How Did We Get So Thirsty?” by Kyle Green. In which a researcher sets out to learn why everyone on campus is hauling around a water bottle.

“Reciprocation Rules,” by Letta Page. In which a behavioral psychologist explains why a sociologist got 200 Christmas cards from people he didn’t know.

“Sport—and Self—Performance,” by Letta Page. In which an educational psychologist explains his proposal to let student-athletes study being athletes with a sports performance major.

“Food Stamp Challenge,” by Hollie Nyseth Brehm. In which living meme Cory Booker challenges himself to live on food stamps for a week and scholars point out the real challenge is getting others to realize the importance of food stamps and dangers of poverty in the first place.

“The Road from Crime (Film),” by Kia Heise. In which Heise recommends a new Scottish documentary for use in criminology and intro to sociology courses as a “compelling and passionate discussion about what offenders need to become ex-offenders.”

“How the Veterans Administration Became a Leader in American Health Care,” by Colin D. Moore. The nation’s largest health care provider isn’t a private hospital network or an insurance company—it’s the V.A, which serves 8.3 million every year.

“Will State and Local Crackdowns Prevent Immigrants from Fitting in to American Society?” by Helen B. Morrow. “Tough” local laws, like those instituted in Arizona and Texas, are meant to take on illegal immigration at the borders. But they also stymie assimilation, increase fear, and let non-citizens feels like non-humans.