#Love and terrorism: Instagram mourning and phatic templates in a crisis

A few years ago, being immersed in my doctoral research about Instagram images and the Manchester Arena attack, I was perhaps too aware of the kinds of images users shared on social media in the aftermath of a crisis. The national flags, the cityscapes and of course the ever-present stylised hearts with the relevant city superimposed, usually accompanied by a #PrayForX. Dutifully, I waded through my dataset each day, assigning categories and themes to these images, identifying patterns.

Enter Friday, 15 March, 2019. I hear the news that 51 people have been killed in my home country, New Zealand. It’s the first act of terrorism the country has ever witnessed. 18,000 kilometres away in Sweden, I’m struggling to piece together this distant and yet extremely close picture. The fragmented scene emerges: two mosques in Christchurch, one of our biggest cities, a white supremacist opens fire on worshippers while claiming to rid the country of “intruders”.

Halfway around the world in another time zone, I cling to scraps of information. All I can think to do is reach for my phone. My cousin sends me a message on Instagram with one word: “awful”. Looking at my feed, I’m instantly confused. It’s flooded with stylised images of New Zealand flags, and what seems like an endless stream of pink hearts, all proclaiming #PrayForNZ and ‘Christchurch’. The images are so familiar to me, eerily identical to those shared after the Manchester attack, almost two years earlier.

After every crisis, the internet is flooded with these global responses from users sharing countless images. What unites so many diverse crisis incidents, from terror attacks to natural disasters, are the ways in which we respond. The repeated, ritualised images we share are familiar partly because they resemble traditional mourning rituals, but also because they reflect our everyday, online vernaculars.

Mediatized disasters like the Christchurch and Manchester terror attacks demonstrate what Simon Cottle argues are “recurrent cultural templates and media frames recycled and overlaid in their media representations”. But when these events play out in the space of Instagram, these recurrent cultural templates often take the form of “grief aesthetics”, highlighting an inherent duality to images like the stylised hearts and flags. The sharing of repeated images can provoke compassion fatigue and accusations of “slacktivism”– a feeling of cynicism towards low-effort mass responses to public tragedies.

Rather than be overcome by cynicism from these copy-paste shows of #love after each crisis, I would argue for understanding these digital hearts as ‘phatic templates’. Emanating from what Vincent Miller calls the “phatic culture” of Instagram, which is comprised of “non-dialogic and non-informational” messages, phatic templates, like phatic communication, can be both fleeting and intimate. These digital hearts are characterised by their duality – on the one hand, the recurrent templates are constantly shared and remixed because they are universally recognisable symbols, particularly in times of public crises. On the other hand, this very repetition is what makes them generalizable in a content- and context-less way. They are at once succinct and specific to the public mourning around the each crisis incident, and also highly general and flattened in their recurrence and form.

The universality of symbols like crisis hearts enables them to spread easily due to their familiarity, but also risks minimising substance and context. At a symbolic level, hearts are easily recognisable, facilitating shared understanding, and providing familiarity in a time of public crisis. The familiarity of phatic templates is particularly important in a space like Instagram, where, as Macdowall and de Souza note, images “often appear as fleeting digital objects in a continually updated visual flow”. This means there is the potential for images to become lost in this unending stream of ephemeral content if they do not capture user attention swiftly.

Although the sameness of their form can reduce the complexity of a violent crisis, viewing these images as part of a “phatic exchange” in the context of Instagram is perhaps more useful in illuminating their role within the public discourse of a crisis. Drawing on Malinowski, Miller refers to phatic exchange as

“…a communicative gesture that does not inform or exchange any meaningful information or facts about the world. Its purpose is a social one, to express sociability and maintain connections or bonds. […] phatic messages are not intended to carry information or substance for the receiver, but instead concern the process of communication. These interactions essentially maintain and strengthen existing relationships in order to facilitate further communication…”

The crisis hearts establish a sense of commonality through their aesthetic sameness and repetition. They are “communicative gestures” that’s purpose is not to inform, but rather to sustain networked relationships between users and their followers. The concise heart symbols flag users’ participation in the public mourning surrounding a crisis, particularly by adhering to stylistic conventions of Instagram – its “platform vernacular”.

Users sharing these phatic templates typically offer little in the way of textual responses in their captions, preferring to add only brief sentences, or simply hashtags, e.g. event hashtags such as #PrayForChristchurch and #ManchesterAttack. 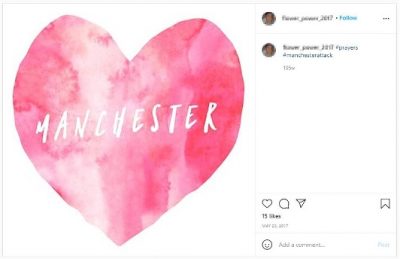 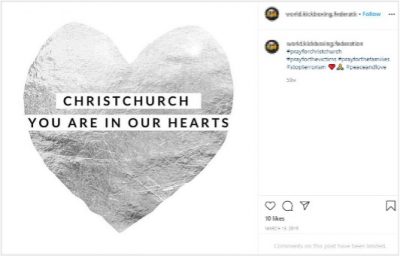 The sharing of succinct phatic templates in lieu of expansive captions points to the centrality of visuals over text for both users and the platform of Instagram. When users add broad event hashtags alongside their phatic templates, they instead index their images within the wider public feed on Instagram, collating individual phatic expressions within the broader conversation around an attack, in a gestural manner.

Beyond the Christchurch and Manchester attacks, users have shared identical heart images on Instagram after many different public crises, substituting the location name for each new incident. Multiple global crisis events in this way are temporally and spatially linked through the sharing of these repetitive phatic templates, shaping the way these events are constituted by publics. Such identical images mean that past – and future – crisis events are drawn into the public mourning of the each new incident, creating an intertextual chain that extends beyond the immediate incident.

The aesthetic similarity of these phatic templates places both individual users and geographically distant crisis events in continual conversation with one another. However, the linking of multiple crisis events also highlights a tension in these recurring visual tropes, contributing to compassion fatigue and a limitation of grief aesthetics. For example, conducting a reverse image search using the Manchester heart as the anchor yields hundreds of analogous heart images from diverse global events: 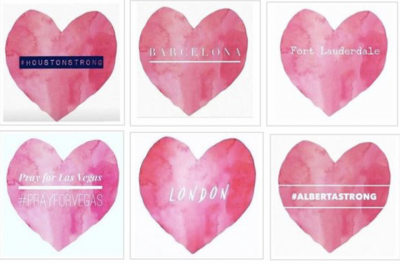 These examples were shared by users between 2016 and 2019, predominantly following terror attacks – e.g.Las Vegas, London,  Barcelona – with one after the wildfire incidents in Alberta. Their highly similar aesthetic is particularly poignant when viewed simultaneously. While the templates create temporal links between expressions of mourning and solidarity following public crises, they also point to a flattening of sentiment into a universal yet unspecific event.

As Crystal Abidin observes, users critical of practices such as these highlight the problems associated with the “cyclic routine of public grieving”, as it “promotes passive solidarity from a distance”. Here, we are presented with the discomfort of chains of phatic templates, particularly in response to violent crises – where singular events and their victims become blurred within a sameness of sentiment and identical templates shared on Instagram.

Whether this is a positive or negative evolution of social communication remains to be seen. But what the relentless sharing of images like hearts underscores is the highly ritualised engagement with crisis events across social media. Amidst Instagram’s unending stream of content, one way for images to stand out is through such persistent repetition and instant symbolic familiarity. Particularly taking into account the fleeting temporal dynamics of a space like Instagram, where singular images are digested in a “distracted” manner and easily overlooked, repetitive chains of phatic templates like these hearts gain visibility through their reiteration.

After the Christchurch mosque attack, I found myself at a complete loss for words – a first for me. I wanted to show that in some way I was with them, my country, to condemn this racial violence, to help make sense of it. I composed and deleted about thirty Tweets and Facebook posts, in the end giving in to the silence. When words fail us, are phatic templates what remain? Perhaps a heart would have said it all. Perhaps it would have said nothing at all. 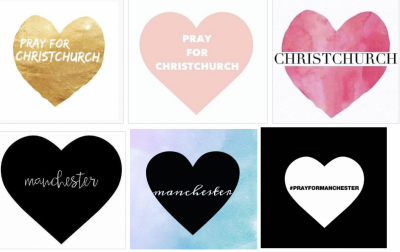 Ally McCrow-Young is a Postdoctoral Researcher in the Department of Communication, University of Copenhagen, examining digital culture, visual social media and data ethics.