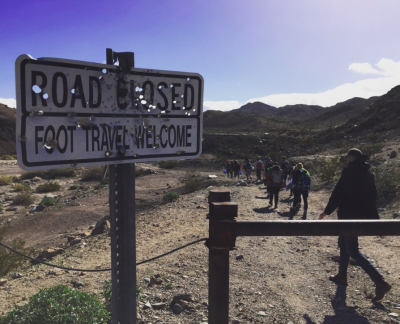 About 60 miles inland from the Pacific Ocean, there is a break in the already existing wall built on the border between the United States and Mexico. When you stand at the Shell Gas Station (the one with the Subway in it) off exit 73 on the I-8, near Jacumba, turn towards the southwest and look at the beginning of this fence opening. Paying attention to the terrain just east of where the last bar of steel juts out of the ground, it won’t take you long to figure out why the wall stops: anyone who attempts to travail the 10 miles of wilderness between the last road in Mexico and the Californian freeway must be well equipped physically and mentally.

This doesn’t mean that American border patrol agents don’t survey and patrol the space without a barrier. The militarization of the US-Mexico border started well before the creation of the Department of Homeland Security, President Clinton’s “war on crime”, or the “war on drugs”. In 1924, the US Border Patrol was created in an effort to keep immigrants from Asian countries from coming into the country. During that time, agents also sought to block illegal shipments of alcohol into the country during prohibition.

The 1996 “Illegal Immigration Reform and Immigrant Responsibility Act”, signed into law by Clinton, was responsible mainly for authorizing the mass deportation of undocumented migrants, as well as a major expansion of the barrier between the US and Mexico, as well as a secondary wall slightly north of the primary structure. After 9/11, billions more (one estimate has it at $286 billion since 1986) were poured into the border: Blackhawk helicopters, drones costing $18 million a piece, 20,000 border patrol agents in military grade Humvees, heat sensors, seismic sensors, motion sensors, and the willful disregard of vigilantes in border-adjacent towns all stand in the way of individuals looking to cross the border—and that’s once they get there.

A large number of the migrants come from Central America to escape political or gang violence. Once in Mexico, options to get to the US border are as dangerous as they are limited: one “popular” way to do it is by hitching a ride on top of a freight train known as La Beastia (The Beast), or El tren de la muerte (The Death Train). Riding this train means risking kidnapping, robbery, or serious injury (limbs are easily removed by obstacles along the train’s route). To reinforce a point made by immigrant and refugee rights activists the world wide, if someone is willing to risk absolutely everything for entry into this country, a place that, with all of its very real and very serious faults, is still safer than the place from where that individual is fleeing, what right do we have to deny them entry, treat them like an animal, arrest them, and/or deport them?

I’m writing this here because I’m not sure what else to write.

Cyborgology is a pretty laid back operation and I don’t necessarily feel pressure from my editors to post. But I’m listed as a contributor to this community and I’d like to live up to the title. Over the past few months, I’ve had some work and school obligations that have slowed me down, but what’s really kept me from posting since my last essay over six months ago is the absolute fear that (at the risk of being a digital dualist) what I’m going to write here does not have enough to do with what’s going on out there (I want to be very clear here that my colleagues at Cyborgology have written a good number of posts about the current administration and so my fear is not based on whether or not my fellow authors focus on the right issues—they do).

Reading about the immigrant detention centers inspired me to turn to a favorite of Cyborgology authors and prolific authority on discipline, Michel Foucault. I found plenty there to draw connections. Similarly, Giorgio Agamben’s State of Exception would be extremely relevant here. And normally, that’s how I would start a post—think of a technology, say, seismic sensors embedded in the desert sand, and then turn to someone who has written abstractly about the sort of apparatus of control embedded within the sensor. Or I’d turn to the use of DNA testing for the reunification of families and consider what it means when an archive of marginalized bodies is being built anew, fortified with the very code of each individual’s physical manifestation.

I just don’t see where my analysis changes the fact that these abominations exist. Foucault was a brilliant historian—a self-proclaimed “archeologist” of power. He set up a multitude of signposts that we can read today to recognize how structures of society organize and control the individual. Has his work changed anything?

This is not an argument against online activism—we know how important and inclusive that element of resistance is. And it’s not a plea to ask you to get into the streets and start punching Nazis (for all I know, you’re already doing that). A few times during the last couple of years, I’ve gone out to the Jacumba wilderness and left water and supplies with an amazing organization called Border Angels. And I’ve attended a few protests. But, primarily, when I fret over what I’m doing to make change, I convince myself that being an artist, historian, and writer is what I do well and what I should keep doing. Is that going to be enough? I try hard to be an ally to the marginalized, but when does allyship fall too short?

My grandmother was lucky enough to escape Europe while the rest of her immediate family was sent to Auschwitz. Three of my great aunts, through a series of luck and generosity from otherwise barbaric Nazis, lived through the experience until the camp was liberated. They traveled on foot and by hitchhiking from one Red Cross shelter to another before finally getting back to their family’s house in Czechoslovakia. They discovered that their neighbors had taken over their home and the shop which their father ran from within. “You were dead,” their neighbors proclaimed, “we figured you weren’t coming back. This is ours now. Go back to being dead.”

Walking through the desert near the routes taken by migrants seeking a better life in the United States, you’ll see evidence of those people: empty cans of food, a body-sized imprint in the sand in a crawlspace. One time I saw a Little Mermaid backpack and another I saw two large dish sponges with shoelaces and foot imprints—most likely someone trying to walk without leaving footprints or disturbing a seismic sensor. How can I make sure that these people—if they make it through the mountains, and the desert, and past the helicopters and drones, and through the sensors, and to the highway, and out of detention centers—how can I make sure that they aren’t told, “go back to being dead”?