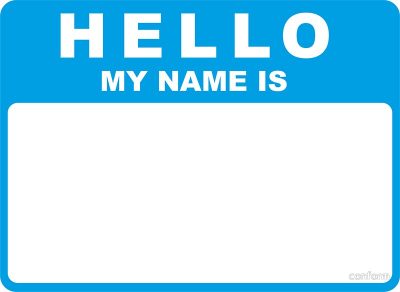 Jessie Sage is not my legal name. Shocking, right? It is, however, my public identity. At this point, so many of my interactions happen through this name that it often feels more natural to me than my legal one. As someone who works in and covers the adult industry, it is the name under which everything I do related to sex work and sex work advocacy falls: my writing, my podcast, my profiles, my activist work, etc.

There are very obvious reasons for this. Sex work is highly stigmatized. And even for those who have only done legal sex work, like myself, there can still be dire consequences to being connected to the sex industry: from social ostracization, to loss of vanilla jobs, to custody battles, to threats of (or actual) violence.

However, the fact that we work under pseudonyms creates a particularly pointed problem when it comes to dealing with companies, platforms, and media outlets that insist on real names, an insistence that de facto silences our voices. This week, I was faced with such a dilemma. The Washington Post accepted a pitch that I sent about what sex workers can positively contribute to the public discourse around issues of consent. Only in the end stages of the editing process did I learn that it was policy that authors can only be published under their legal name.

I talked extensively to the editor about why this was a problematic policy for sex worker writers, and he was very sympathetic and fought hard for me to be able to publish the piece under Jessie Sage. Yet, neither of us were able to change the minds of the powers that be.

I very nearly pulled the piece, but after much internal debate, I decided to publish it—a decision that I am still conflicted about. The underlying argument in the piece is that sex workers should be taken seriously in public discourse and that their voices are important. Given that this is what I was fighting for, it seemed counterproductive to allow myself to be pushed out of the conversation, particularly on a platform as large as the Washington Post. Moreover, it wasn’t just my voice, I interviewed several other sex workers who I deeply respect, and they deserve to be heard.

While real name policies in journalism predate the internet, I think that it is fair to say that the same divisions in the so-called “nymwars” are also at play here. Famously, Facebook (and Google+, RIP) dug their heels in and claimed that only real and authenticable names can be used on their platforms (though this rule is selectively enforced). The justification for this is the assumption that people feel more accountable for what they say when it is connected to their real names, thus fostering greater safety. Media outlets with real name policies seem to have the same concern: that contributors will be more accountable for their work when it is published under their real name.

But this brings up two important points: first, there seems to be confusion between using a pseudonym and being anonymous; and second, it fails to ask the question, safe for whom?

To the first point. What platforms and media outlets fail to recognize is that for people in stigmatized professions (or other marginalized subculture), pseudonyms often become our identities (or an important part of our identity). This is why, for example, sex workers found it so odd that media outlets found it necessary to repeatedly mention Stormy Daniels’ legal name and, at least until the last couple years, referred to trans folks by their birth name.

The fact that established pseudonyms construct identity differentiates them from anonymity, which conceals identity. In my case, there is way more information online about me under Jessie Sage than under one of the three legal names I have used through marriage and divorce and remarriage. And because it is a professional name and my professional reputation is on the line, I am forced to be thoughtful about what I post under this identity.

And this applies to anyone who uses anything other than their legal name as a professional identity. Several years ago, awarding winning novelist Salman Rushdie won a battle with Facebook over the right to use Salman Rushdie as opposed to his legal first name “Ahmed.” Ironically, the Washington Post reported on this story. It stands to reason that given his prominence, Salman Rushdie would be held more accountable for online activity than would Ahmed Rushdie, who has no public presence.

To the second and more important point, Facebook and others have claimed that real name policies keep the internet safer. But the question here is, safe for whom? I certainly do not feel that I am safer. Setting up Jessie Sage as an identity ensured certain protections. When looking for non-sex work related job employers wouldn’t be able to Google search me and discriminate based on my political writing and my sex work, and Jessie Sage isn’t linked to an address where people can harass me.

I’m privileged in ways that allow me to take risks like this. I am completely out in my family and my community, and the other work that I have done is congruent with my sex work. But this is precisely the reason that I could make this choice. I know that there are many people for whom publishing about their sex work under their legal names is completely unimaginable, and where the negative consequences for their personal lives would completely outweigh any of the motivation for doing it. But this is the problem. These policies push important voices out of public discourse in a way that further stigmatizes and marginalizes entire groups of people.

Jessie Sage is not my legal name, but you can find me on Twitter @sapiotextual.