Or, When Batting Your Eyelashes Doesn’t Work 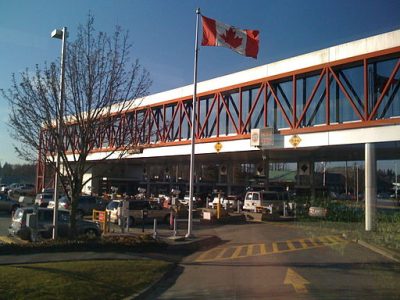 I was recently asked to run a “Sex School” seminar on dirty talk at a sex club in Toronto. This invitation came by way of Twitter, in large part because of the profile I maintain in part to advertise my phone sex services. Toronto is half a day’s drive from where I live, so I drove up on the morning of the event. For this reason, I primped at home beforehand, which included full makeup appropriate for the role I was playing as sexpert at a club (read: heavy eyeliner and fake eyelashes – sexy for the club, a bit over the top for daylight).

What I didn’t anticipate was the way that my appearance (in conjunction with my role as a paid speaker in a sex club) was going to read to the Border Patrol. Indeed, while they didn’t say it explicitly, they flagged me as a sex worker, and detained my husband and I under that suspicion.

The line of questioning went something like this: Where are you speaking? What do you do to get such speaking gigs? Is there money involved? How much? Did you bring a contract? How will they pay you? I told the Canadian Border Patrol agent that this was all negotiated on Twitter, and she asked for my phone, making sure the social media apps were accessible. We were told to return to our seats, where we watched her comb through my phone from a distance.

I was surprised to receive this level of scrutiny, but perhaps I shouldn’t have been. Just a few months earlier, I was at an industry event in Miami where several sex cam models on the Canadian side of the boarder were denied entry into the United States after they had their social media profiles examined, which outed them as cam models. They had to forfeit their tickets and hotel accommodations, not to mention presence at an event that was meant to help bolster their careers. So, I suppose it shouldn’t have been too much of a shock that this sort of scrutiny would also flow in the other direction.

More and more, these social media examination policies are a major problem for sex workers who want to freely cross the US/Canadian border. Though there has been an increase in phone seizures since Trump’s Executive Order banning entry for people from seven Muslim-majority countries, this practice did not start with President Trump. Both US and Canadian Customs officers have been scrutinizing certain flagged visitors’ cell phone content and social media presence since George W. Bush’s presidency. And, it is not just in leaving one’s country that this is an issue. Journalist Erin Rock explains that “While US citizens will ultimately be allowed to enter, their phones and electronic devices are still subject to search and seizure at the border.”

It might seem like the easiest solution to this problem would be for sex workers to opt out of social media, or at least any non-vanilla social media presence. This may be possible for strippers and other sex workers who work locally. However, for many sex workers, social media presence is a necessity for the recruitment and retention of clients, and thus for a functional business. High end נערת ליווי, traveling models and strippers, and almost by definition all online sex workers, including cam models and phone sex operators (my forte) all depend on social media to develop and legitimate their brand. This is so much the case that Sherri’s Brothel—one of the few legal brothels in Nevada—offers classes on how to maintain a Twitter profile, underling how essential social media has become in the sex industry.

The last two years data has proven that Twitter is a powerful lead generator for Sheri’s Ranch,” the guide reads. “A courtesan’s tweets add another dimension to her personality and enhances her brand.

In a milieu where carefully crafted branding on social media is a large part of the work of being a sex worker—but where that very social media presence is often used as a weapon against us, restricting our mobility—we are in a bind. Suggesting that we just cease using social media altogether is to suggest that we give up the possibility of actually having a sustainable work model. Further, it doesn’t take into consideration the fact that for those of us who have already had our social media accounts flagged, the upkeep of these accounts may border on compulsory in that the conspicuous absence of them in future trips could raise red flags. Indeed, this happened to a gay Vancouver man who was detailed at the US border for (false) suspicion of sex work due to a dating site. In trying to avoid the same treatment he deleted his accounts before border crossing and was told by the officer, “Next time you come through here, don’t have your phone cleared.”

All this is further complicated because social media presence is thought to be a reflection of who we are as people; just as sex work in life sex work trumps other facets of a woman’s identity, so too on social media does its presence trump all else.

For most people crossing the border, the question, “Are you traveling for business or pleasure,” is a benign cliché. Sex workers, however, are not afforded the luxury of this distinction. Part of whore stigma is the inherent assumption that sex workers are always working—that we are one-dimensional. The cam models who were trying to cross the border to go to the convention were not doing so with any specific intent to cam in the United States. Instead, they were coming for an award ceremony. Yet, they were denied entry because of a failure of imagination: officers, and the system writ large, could not imagine sex workers’ lives beyond their sexuality. The irony is that the multi-dimensionality of our lives is all documented there in our phones. The officers could have just as easily read the many banal interactions with my mom about our dogs, or the groceries lists I send to my husband as they could view promo pictures for my work. But sex work casts a shadow on all else.

Ultimately, given that the sex work I do in the US is legal and that there was no concrete evidence that I planned to do any sex work in Canada, she let us cross the border. However, this wasn’t a given. We overheard her and her superior’s conversation where he told her it was up to her discretion, but that she could turn us away if she wanted. We made it that time, but we’ve presumably been flagged, so this may continue to be an issue.

Is there a way out of this seemingly closed loop in which I cannot do my work without maintaining a social media presence, but that very social media presence can be used to thwart my professional efforts (and perhaps my personal travel)? There are several suggestions online addressed to sex workers specifically: downplay your appearance when crossing the border, maintain a work phone that is separate from your personal one that you leave at home, wipe your devices, etc. While these are all good suggestions, I would like to add one more to the mix (perhaps an overly idealistic one): That we use our social media platforms to raise awareness of the issue, to fight for protection of ourselves, to seek solidarity with each other, and to work toward political and social change in regard to both social media privacy and sex work.

Appalling. I would never be asked such questions about my job nor have my phone searched for my social media posts. If your work is legal in your residential location and you are declaring that you are not travelling for work then this should not even be questioned. I am particularly concerned that it was left to the customs officer's discretion as religious or other moralistic judgements may have seen you turned away.