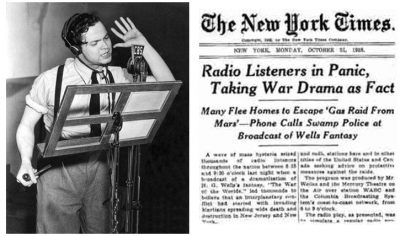 When I started this series three weeks ago, my goal was to provide a review/recap of Orphan Black’s final season, tying it to issues of the body, history and philosophy of science, and the value of fiction. Turns out that last element drew me in and I was most curious about the way that Orphan Black’s creators, Graeme Manson and John Fawcett, employed their science consultant, Cosima Herter, in order to make the science in the show as “real” as possible, while still developing and producing a piece of work that was very clearly fiction. Along the way, I’ve found myself wanting to bring in other works of narrative-based fiction. I wrote about Mr. Robot, but I have drafts that include Minority Report, Black Mirror, Nathaniel Rich’s 2013 novel, Odds Against Tomorrow, Margaret Atwood’s Oryx & Crake, The Blair Witch Project, and Orson Welles’s 1938 War of the Worlds radio broadcast. Reflecting back on those drafts, I came just short of plotting these works along a matrix consisting of two axes: plausibility and believability. That is, could this not only actually happen, but would a public believe it had? In effect, I began to work out how hyperstitious to consider each of these culture artifacts.

Deciding that in earnest would take quite a bit of effort on my part, plus some training in sociological methods, not to mention IRB approval. I am willing to argue, however, that medium and channel have a significant effect on the believability of a piece. Not terribly controversial, I know. But when Margaret Atwood writes a novel, it goes into the fiction section and we need not worry that a madman acclerationist capable of doing so has decided to play god. Why, then, does she need to begin the acknowledgements for Year of the Flood, Oryx & Crake’s follow up, by stating that the novel “is fiction, but the general tendencies and many of the details in it are alarmingly close to fact”?

Hyperstition is a valuable concept because it helps us see that a story like Atwood’s might move out of the fiction section, coming to fruition in another form. This shift is not only promulgated by artists or authors, of course. Advertisers ask you to imagine yourself in a car that will park itself a year before the product is available on the market. Realtors on HGTV or its equivalents are thrilled to hear visitors to an open house begin to “see” their own furniture in the living room of a listed property. My concern as an artist, however, is how to utilize hyperstition in the service of affect, change, and revolution.

Earlier this year, I argued that a popular “sciency-art” is increasingly being produced for the sake of science and not so much for art. But maybe this trend is something that we can appropriate for our own motives. As I noted in my previous post, when Dunne and Raby show Faraday Chair, it’s very clearly a piece of art meant to provoke. But what if they showed it at a furniture show? What if Wodiczko brought his Homeless Vehicle to a TED talk? Would they be selling out? Would they be perpetrating hoaxes? If they were found out to be a performance piece, would their adoring public feel devastated (as one tech scholar did after Horse e-books was revealed to not be as algorithmically curated as once thought)?

The reason these methods of presentation would not work is clearer when we return, once again, to Delphi Carstens’s explanation that hyperstitions “fan the flames” of cultural anxiety. When Wodiczko complains that viewers of his work want projects like Homeless Vehicle mass produced, he is responding to the fact that they are not made anxious by it—they feel hopeful. Charlie Brooker’s Black Mirror episodes garner affect through shock value. His challenge is to not go too far before swaying into campy horror or implausible absurdity. Galleries and festivals like Transmediale, SLSA, and Science Gallery have made room for this absurdity, now it’s up to us to embrace the “neatness” factor, but certainly not at the expense of affect.

Of course, in the case of Orson Welles’s radio show, the reports of the panic that resulted from the broadcast were widely exaggerated. Jefferson Pooley and Michael J. Socolow write that a wire report was picked up by daily newspapers, hungry for something to boost readership and build doubt in the reliability of radio as a whole, leading to the promulgation of the myth of the program’s panic-inspiring believability. On the complete flip-side, 61 years later, when Artisan Entertainment released Daniel Myrick and Eduardo Sánchez’s The Blair Witch Project, the studio made it very clear in promotional material that the film was completely fictional. Still, the town of Burkittsville, where the story was purported to have taken place, was inundated with witch hunters for a significant time after a successful theatrical release. The hyperstitious outcomes of a work are, perhaps, out of the hands of the artist.

But we can still give it a shot.

Gabi Schaffzin is a PhD student at UC San Diego. He has lost track of whether his work is considered real, fiction, or fake.