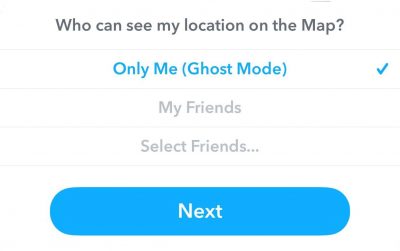 Snapchat recently released a new feature called Snap Map that lets users see the the location of their friends’ snaps organized on a map. The feature is opt-in only and carefully avoids unintended disclosure of user data. Snapchat even nudges users to actively manage who they share their location with. The Snap Map support page says (only half-jokingly):

Only the people you choose can see your location — so if you’re friends with your boss, you can still keep your location on the down low during a “sick day” ?

This cautiousness in introducing features—particularly ones that reveal location data—is laudable and also not surprising. Many social media users may not remember the ill-fated rollouts Facebook Beacon and Google Buzz [1, 2], but Silicon Valley designers remain acutely aware of how intense the backlash can be when new features fail to incorporate sufficient privacy protections.

While Snapchat has been careful in their implementation of Snap Maps, the feature has raised serious concerns for cam models, clip producers, phone sex operators, and other online sex workers, many of whom are very active on Snapchat and rely on it as a significant source of income. Often, sex workers chose to work online precisely because they want to maintain geographical distance from their client and to ensure their physical safety. Most online sex workers are very guarded about their location and many adult sites incorporate geoblocking tools that allow workers to only interact with clients that do not live in the same city or state.

Harassment, stalking, and doxxing of personal information are common hazards that online sex workers face when clients fail to understand the boundaries of compensated relationships or when they are called out for bad behavior. In extreme cases, sex workers have gone into retirement, which is particularly problematic considering widespread employment discrimination against former sex workers.

Immediately following the release of Snap Maps, Twitter was flooded with concerns over prospect of incorporating geolocation data into the platform. 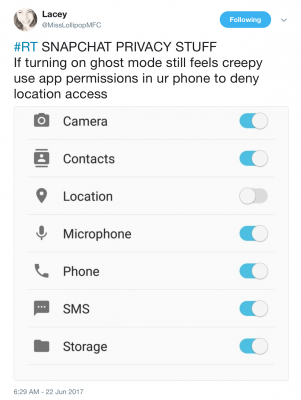 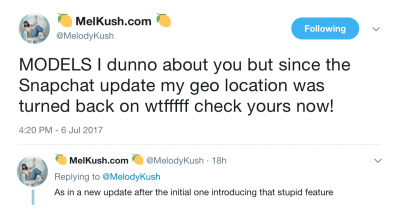 Sex workers are not just concerned about the particular details of Snap Map in its current form, which can easily be shut off; they are also more broadly concerned about what future changes the platform may make now that it has invested itself so deeply in geotagging. These concerns are exacerbated by the fact that Snapchat has always had a tenuous relationship with sex workers (and sex in general).

It was obvious from the beginning that the limited scope and ephemeral nature of snaps made them highly conducive for sharing sexual content. But, Snapchat steadfastly discourages any associations between its brand and sex, fearing that being labeled a sex site would close it off to a much broader audience (particularly young people). Earlier on, founder/CEO Evan Spiegel downplayed Snapchat’s utility as a vehicle for sexual content by dismissing digitally-mediated sex as inferior and undesirable:

I’m not convinced that the whole sexting thing is as big as the media makes it out to be. I just don’t know people who do that. It doesn’t seem that fun when you can have real sex.

Even then, Spiegel’s statement appeared somewhat disingenuous, given that a Pew survey* conducted the same year (2012) found that 18% of people ages 18-29 report sending sexually suggestive pictures or video of themselves with a cell phone. 42% of people in this age group reported receiving such images.

One consequence of Snapchat’s willful ignorance regarding sex work is that sex workers are marginalized in the design process. They are not included as one of the imagined users that designers consider when evaluating possible changes to the platform. On the one hand, this means Snapchat fails to institute features that accommodate the needs of its significant sex worker/client user base. Sex workers must use Snapchat against the grain by offering unofficial subscriptions that are meticulously tracked in spreadsheets with payments being processed through other vendors. On the other hand, this means that designers are not asking how the features they do green light will affect sex workers.

So, while the current version of Snap Map is unlikely to drive sex workers away from the app, the potential consequences of having one’s location outed is so great that sex workers are left asking “what’s next” from a company that seem intent on ignoring them.