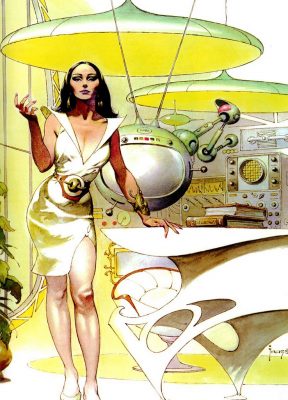 I need to start this essay by making one thing clear: I will not in any way suggest that cam girls or the work that they do is problematic. On the contrary, this essay is aimed at appreciating some of the complexity involved in this form of sex work. In particular, it examines how the culturally ubiquitous trope of the Manic Pixie Dream Girl (MPDG) shapes the expectations an audience might place on cammers (especially young cis-women cammers) and how cammers anticipate and capitalize on such expectations.

Sex work is a performance that requires anticipating and reflecting the desires of customers. Many sex workers have a specific role or act that they regularly return to whenever they are on the clock. In some cases, this may even involve what Arlie Hochschild (The Managed Heart, 1983) called “deep acting” (i.e., working to feel the desires or emotions required by a performance or to achieve a real connection with clients). However, the identities of sex workers are not reducible to these performances anymore than the personalities of flight attendants or waitresses are reducible to their interactions with customers. In Playing the Whore (2014, p. 86) Melissa Gira Grant explains:

Acting as if we share our customers’ desires is the work of sex work. But that’s not the same as allowing our customers to define our sexuality… [we need] to see off-the-clock sex workers as whole, as people who aren’t just here to fuck.

For many sex workers, performing at work involves manipulating the sexist assumptions they encounter throughout their lives so that they can actually benefit from them. For example, cammers often adopt the feminized role of dutiful listener because it gratifies customers who stick around and pay just to talk. In this way, sex workers present themselves as fantasy objects for men (at least temporarily). Grant observes (p. 90):

Sex workers know they are objectified; they move in the world as women too, and through their work they have to become fluent in the narrow and kaleidoscopic visions through which men would like to relate to them as sexual fantasies embodied.

Which fantasies women are expected to embody will, of course, vary based on the cultural assumptions of a particular time and place. And, given the increasing prominence of the MPDG in Hollywood films and other media, it seems likely that this trope is also becoming more commonplace in men’s individual fantasies. As such, it is something that sex workers will increasingly have projected on them and will increasingly respond to. But before I discuss how I think the MPDG trope is affecting sex work—and camming in particular—I need to review the characteristics that define the MPDG.

In his 2007 essay coining the term, Nathan Rabin explains:

The Manic Pixie Dream Girl exists solely in the fevered imaginations of sensitive writer-directors to teach broodingly soulful young men to embrace life and its infinite mysteries and adventures.

Rabin later elaborates that the MPDG

seem[s] to belong in some magical, otherworldly realm — hence the “pixie”… a… carefree nymphet who is the accessory to [a male protaganist’s] character development. It’s an archetype… that taps into a particular male fantasy: of being saved from depression and ennui by a fantasy woman who sweeps in like a glittery breeze to save you from yourself, then disappears once her work is done… a fancifully if thinly conceived flibbertigibbet who has no reason to exist except to cheer up one miserable guy.

The trope of the Manic Pixie Dream Girl is a fundamentally sexist one, since it makes women seem less like autonomous, independent entities than appealing props to help mopey, sad white men self-actualize.

In other words, the chief feature of the MPDG trope is the reduction of women to nothing more than props in a man’s quest for self-actualization.

Particularly relevant to sex workers encountering the MPDG trope is David Strohecker’s observation that what makes an MPDG so inspiring to the man at the center of a story is her propensity for breaking rules and norms. The rebellious nature of the MPDG appeals to men who are unsatisfied with their lives but unable to break out of their own habits and narrow view of the world. Strohecker explains:

Hollywood fetishizes the progressive, non-conformist type; the type of woman that has visible tattoos and body piercings, yet exudes a childlike glee and excitement about life. Why? Because such women serve as muses for young men, men in power, or soon-to-be heirs of privilege. They are accessible as cultural objects, things to be gazed at and amazed by. They may even be listened to, but only when seeking emotional support, inspiration, or hope.

While MPDG characters are portrayed as outsiders, sex workers occupy prominent outsider role in society: the role of whore. Whores defy the compulsory virtue society prescribes for women, choosing how and when to express their own sexuality. In Sex at the Margins (2007, p. 101), Laura Agustín explains that, when the term originated, the emphasis was on rule-breaking not just monetary exchange:

‘Whoring’ referred to sexual relations out of marriage and connoted immorality or promiscuity without the involvement of money, and the word whore was used to brand any women who stepped outside current boundaries of respectability… there was no word or concept which signified exclusively the sale of sexual services

Though the whore is stigmatized by society, she is also liberated—free to embrace other possible ways of being. Through the male gaze, women perceived as whores appear to be avenues of sexual possibility not open to men in the conventional relationships that they have reserved for “good girls.” And, in this sense, whores’ non-conformity—like that of the MPDG—may “inspire” or be “fetishized” by men who would treat them as a muse for their own (sexual) self-actualization. Of course, whores are not merely props for men’s self-actualization. In fact, it is women’s expression of their own sexual agency that, ironically, gets them branded as a whore.

The reason that the role of the whore is relevant to the MPDG is that the intrinsic non-conformity of the women who occupy this role makes them attractive to men looking to play out an MPDG fantasy. This tendency is further encouraged when women exhibit other visible markers of non-conformity: dyed hair, tattoos, uncommon piercings, symbols of non-mainstream tastes (bands, movies, books, etc.). And, it is encouraged even more when other traits of the MPDG (e.g., youth, bubbly personality, quirkiness) are present.

This brings us to the chief observation I want to make in this essay: Sex camming sites are full of young, bubbly, geeky, tattooed women with vividly-colored clothes, hair, and backdrops. This pattern is derivative of the MPDG trope—we might call it the “Manic Pixie Cam Girl”—and, I am suggesting that two things are happening to cause this: 1.) men have a propensity to imagine women occupying the whore role as muses who can help them in their quest for sexual self-actualization, and 2.) cammers are successfully exploiting this sexist male fantasy in their shows by selling an MPDG fantasy.

These are just broad observations, and only cammers themselves can speak to if and how much they have deliberately adopted the MPDG trope as a playbook. (In my experience, cammers are keenly aware of such trends and are creatively engaged with culture writ large.) What is certain is that cammers, along with their clients, are part of a shared cultural landscape where images of MPDGs feature prominently. Whether or not a cammer explicitly frames her performance in terms of the MPDG, this trope provides a script for interactions that both parties have been socialized to understand intuitively. And, this learned pattern of interactions is what Manic Pixie Cam Girls are very intentionally capitalizing on in their performances.

What, then, are we supposed to make of Manic Pixie Cam Girl trend?

Undoubtedly, some critics will argue that the Manic Pixie Cam Girls—like the MPDG trope—only reinforce the male fantasy that women are accessories or props that can be ignored when not immediately useful. In movies, relationships with MPDGs are almost always ephemeral—the male protagonist racing to get what he needs from an MPDG before repeated interactions force him to recognize her as something more than an object. And, perhaps, the transactional and contingent nature of cam interactions does seem to confirm the suspicions of these skeptics—after all, a viewer can just log off as soon as satisfaction is achieved.

But, unlike movies, camming is interactive, and these interactions are often ongoing, especially for regular customers. Over time, viewers see cammers’ moods vary. And, cammers often use social media to share events and life experiences with engaged audiences. Also unlike Hollywood, cammers are their own writers and directors—they control their own shows and make the ultimate decisions about when and what to perform. In all these ways, the MPDG-esque illusion of other-as-fetishized-muse may be harder to maintain on cam site. And, it is even quite possible that the audience likes it that way. After all, playing with and subverting conventional social roles is the basis of a wide range of kinks.

Beyond the question of women’s representation—whether Manic Pixie Cam Girls help or hurt the way women are perceived in general—is, perhaps, an even more important issue: How the individual women performing on cam are managing to pursue their own ambitions in a hetero-patriarchal society. And, I believe we ought to celebrate anyone who is able to turn that which is used to oppress them into an opportunity. By capitalizing on sexist male fantasies, MPCGs are doing just that.