Pen Pineapple Apple Pen and the Lifecycle of Internet Virality 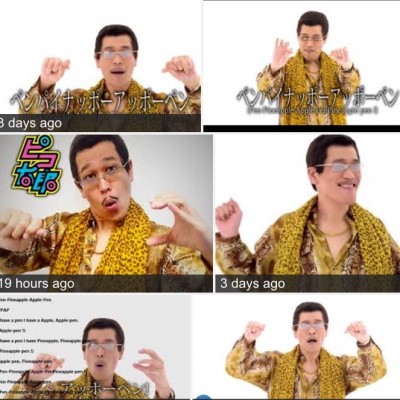 This is the Pen Pineapple Apple Pen (PPAP) song that started amassing virality around 25 September 2016, despite being published on YouTube a month earlier on 25 August 2016. This is the tutorial from its original artist, published on 26 September 2016 in response to volumes of covers, remixes, and parodies being produced as the song approaches the climax of viral fame.

The ‘official’ backstory, according to the wisdom of throngs of popular media articles churned out this week, is that the artist in the video is Piko-Taro, a fictional character played by entertainer DJ Kosaka Daimaou, whose is actually a 51-year-old Mr Kazuhiko Kosaka. His character Piko-Taro first began life as a stand-up comedian at live shows. (For those of you who are in-tune with YouTube or Influencer culture, think Miranda Sings as the fictional character played by microcelebrity Colleen Ballinger who goes by the handle ‘PsychoSoprano’ on the internet. See also here.)

Piko-Taro started his YouTube channel on 23 August 2016, posting short songs while dressed in his now-signature gaudy fashion and wig, with flamboyance in tow. The virality of his debut PPAP video was facilitated by digital user-generated humour platform 9GAG on its Facebook page. In the wake of his recent virality, Piko-Taro has been retweeting and responding to some followers in a smattering of English on his Twitter, which was created just months prior in June 2016. He is on Facebook here.

In this post, I discuss the circulation of PPAP, the value judgments made about it, its characteristics and predecessors, and the potential future of Piko-Taro.

Most viral artifacts on the internet go through a standard script as they circulate. As a viral YouTube song, PPAP has achieved these milestones of virality on YouTube and across other digital estates:

3) Parodies – with cultural-specific innuendos by microcelebrities Bie The Ska and Happy Pola, with national inside jokes by digital platform SGAG

5) Challenges – among Japanese teens, among YouTubers

7) ‘How to’ tutorials – from Piko-Taro, on keyboard, on guitar

As popular commentary on PPAP proliferate and the viral song approaches its plateau, several value judgements have been cast on the song, Japanese culture, and internet virality more generally. To survey the landscape of such sentiment, I coded themes through key descriptors in the first ten reports for the Google search phrase “pen pineapple apple pen”. Articles were collected on 29 September 16, at 1600hrs, GMT+8.

The first ten reports were:

The first nine articles from various popular media and news sites regurgitated content from each other, while the tenth article at abc.net.au was the only one that consulted expert commentary, music psychologist Dr Tim Byron, to explain the phenomenon of viral songs.

Here are the main themes I observed and the key phrases from the articles:

2) PPAP is viral because of its beat, lyrics, and dance

“not particularly trended on Japanese social media”, “make inroads into Western internet circles”, “internet is obsessed”, “take over the world”

“the next Gangnam Style”, “the next Psy”, “the next Harlem Shake”, “reminiscent of recent hits like Singapore actor Chen Tianwen’s ‘Unbelievable’”

Folklore and conspiracy theories regarding the “true meaning” of the song have also begun to emerge, such as how it has a “hidden sexual message” (thebitbag.com) because of “innuendo[s]” (idigitaltimes.com).

While I am chiefly an academic, I also do consulting on the side for companies who wish to develop their social media presence and estates. Clients often ask if I can make something “go viral”, or whether I can give them “the formula” to achieve virality. The truth is, there are no perfect rules. Some internet researchers have studied virality in various forms (and you can read examples here, here, here, and here). In response to my thematic codes of popular press articles above, in this section I wish to think through a few qualities specific to PPAP’s virality.

In my study of ‘grotesque microecelebrity‘, I borrow from American writer Susan Sontag‘s notion of ‘camp‘ to understand ‘visceral camp’. Visceral camp is the aesthetic of playful, anti-serious visual displays and theatrics that are exaggerated and outlandish, carefully curated to convey atypical taste and overwhelming to the point of ridicule and primitive gawking. In Singapore, recent viral hits of such excess include television network Mediacorp Channel 5’sUnbelievable (2015) and and musician ShiGGa Shay’s Wussapa (2015).

Piko-Taro and PPAP are camp performances; they present a gaudy aesthetic that is a melange of bad fashion sense, flamboyance, internet weird, and internet ugly. Yet at the same time, PPAP means nothing, it is nonsensical and void of distinct meaning. This thus presents PPAP as a template, a blank canvas onto which viewers can project meaning, and into which viewers can invest creatively. Predecessors as such include the Harlem Shake (2013) and What Does the Fox Say (2013).

As earlier noted, PPAP is also replicable because its tune, beat, lyrics, and dance moves are simple to emulate. It also has a memorable gestural sequence and iconic catchphrase. The Macarena (1993) and  Gwiyomi (2013) are similar viral hits that were easy to translate across cultures, and easy to transpose across mediums as they were straightforward to copy.

The one thing that really stood out to me was how ‘the internet’ compared PPAP to Gangnam Style (2012). This was probably because Gangnam Style still holds the record for being the most viewed video on YouTube, but more likely because this song was the last “Asian” artifact to go viral globally.

PPAP has been described as a “Jpop meme” or “another pop meme imported from Asia” that has “finally made its way to the American internet” (dailydot.com) and “ma[de] inroads into Western internet circles” (mashable.com). In other words, in the cultural hegemony of the internet and its repertoire of virality, PPAP is the exotic Other, the underdog, and the oriental “magical” (mashable.com) thing that has managed to successfully infiltrate the ‘normal’ internet. This exoticism also applies in other non-hegemonic “Western” contexts, such as when Trololo (2009) from the Soviet era gain virality.

Of course, the lyrical simplicity and Japanese-accented English in PPAP also taps into the popular humour of Japlish or Engrish, which sometimes results in legendary internet gold such as “All Your Base Are Belong to Us“.

In media scholar Koichi Iwabuchi’s work on Japanese popular culture (2002) and anthropologist Christine Yano’s study on Hello Kitty (2013), they discuss “recentering globalization” and “decentering globalization” respectively with regards to how popular culture trends emerge and circulate. Global trends usually originate at a ‘core’ before flowing across national, geo-political, and socio-cultural boundaries to the ‘periphery’ where they are then taken up.

In the past, the core was usually the USA from which trends would spread to the rest of the world. However, with the proliferation of Jpop and the recent emergence of Kpop, these global cultural flows have been changing and shifting, such that the core is situated outside of the USA and in places such as Japan (i.e. Jpop, PPAP) or Korea (i.e. Kpop) for example. PPAP and Gangnam Styles are great case studies for how such cultural flows are “recentered” or “decentered”

Where to from here?

What DJ Kosaka Daimaou/Mr Kazuhiko Kosaka will do with Piko-Taro’s new internet virality is any one’s guess, although given his background in the entertainment industry, Piko-Taro is likely to evolve from a viral artifact of transience to a celebrity  icon with longevity. However, making the leap from virality to micro/celebrity is not an easy task. Even though Piko-Taro is now an internet-household name, his digital estates have not been clocking the views and traffic he has accumulated – after all, his fame was largely catapulted by 9GAG who reposted a video from a user that did not link back to Piko-Taro’s original YouTube video. Even now, much of the traffic is redirected to various copies and reposts rather than his original video.

Digital estates aside, Piko-Taro seems to have a memorable brand on track, with his formulaic and trademark fashion (gaudy gold), setting (all videos on YouTube show the same white back ground), lyrics (nonsense, humour, Japanese/English), and dance moves (i can’t even).

In the lifecycle of his virality, and as with most predecessors, I anticipate that Piko-Taro will soon produce his own official merchandize (as opposed to random Amazon users profiting off the hype with homemade goods), appear and perform on a prime time slot in the USA (such as the Ellen show), and be approached to endorse brands (Apple, obviously?). But here is where it gets tricky, because commerce and over-exposure is where virality starts to plateau and memes begin to die. As a scholar of internet culture, I’d be excited to watch the Piko-Taro hype unfold in the next few weeks. For now, PEN PINEAPPLE APPLE PEN.

PPS: I wrote this blogpost while listening to a 10-hour loop of PPAP on YouTube. I take my craft very seriously. (But I also gave up at the 1hr 55min 14sec mark to retain my sanity).

Dr Crystal Abidin is an anthropologist and an ethnographer. Reach her at wishcrys.com and @wishcrys. This post was first published on wishcrys.com.