Trump Is No Troll 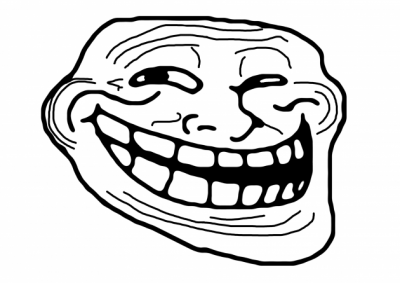 From the beginning of his entrance into the race, we’ve been clamoring to categorize Trump, to understand where he fits into the political and cultural landscape. First, he was a flash in the pan, an inevitable “also ran” with whom voters would quickly lose interest. He’s an “outsider,” despite his bragging about pulling the strings of politics through political donations for decades. He’s a fascist, hell-bent on whipping up national fervor to undermine democratic institutions and further bolster white supremacist power. And, of course, he’s a troll just trying to get voters riled up.

It’s a bit comforting to call Trump a troll. Last summer, Nathan Jurgenson made the compelling argument that we call Trump a troll to convince ourselves that the rest of the presidential horserace is good-faith politics. He concluded that we are being trolled, but not by Trump; we’re being trolled by a corporate news media that is desperate to convince us that the spectacle is real, that Trump is different from other presidential candidates. Jurgenson argues that, in fact, Trump is playing the same game as the rest of the presidential field—he’s just better at it.

Jurgenson’s essay is delightfully cynical. The first time I read it, I couldn’t help but think of Jean Baudrillard’s description of hyperreality, a symbolic representation with no basis in reality. Baudrillard proffers Disneyland as an example of the hyperreal, a sign without a referent. Disneyland presents us with an imaginary world, an idealized version of our own, with a small-town America Main Street and animatronic crocodiles. For Baudrillard, Disneyland tries to sell you the idea that you are escaping reality when, in fact, Disneyland is more real than the LA urban landscape that surrounds it. In the same way that Disney is there to convince you that the rest of the world is real, Trump’s role is to convince voters that the rest of the horserace is in good faith. He’s not a troll, he’s a sign without a referent. He’s a convenient lie, persuading us that when we leave the amusement park, the real candidates will be waiting for us.

But a lot has changed since last summer. Trump isn’t a sideshow anymore. He is the main event. And yet, the troll title has stuck. Part of the reason for the persistence of this misnomer is, as Jurgenson points out, the haphazard application of the term “troll” to anyone who is bigoted or mean spirited. But it’s worth trying to understand what a troll actually is, assuming we want to treat it as a meaningful cultural trope with clear boundaries and sociological utility.

Fortunately, scholars have written a great deal about trolls. I rely on Whitney Phillips’ excellent book This Is Why We Can’t Have Nice Things to try to get us back on track in our use of the term, and to understand why it’s so important that we don’t think of Trump as a troll. Phillips lays out some basic characteristics of trolling. First, trolls are devoted to disrupting what they consider worthless conversations. They attempt to upset as many people as possible. They want to elicit feelings that are disproportionate or unreasonable. They are incredibly media savvy, and know exactly how to manipulate the news cycle and the affordances of social media to achieve their goals. They target easily-exploited populations, such as people already fiercely invested in a specific topic, or those already prone to sensationalism and outrage.

At this point you’re thinking “check, check, check…” and you’re absolutely right. Trump shares many of the characteristics of trolls, and that’s why the label sticks to well. But the linchpin of why Trump is not a troll is the most important troll characteristic of all: lulz. Trolls, according to Phillips’ research, troll for one reason—to elicit emotional reactions for their own enjoyment. Trolls take glee in embarrassing others, in making them reveal their own hypocrisies and “irrational” emotional attachments. It’s schadenfreude on steroids. Trolls, by any definition that takes into account the rich history of the term and the way self-identified trolls employ it, do not typically troll because they want to make meaningful change or convince anyone of their beliefs (though this may, on occasion, happen). They troll for lulz. They troll because it’s fun.

By this definition—and I think it’s the only definition that can make troll a useful analytic term—we have to ask ourselves about the difference between Trump’s tactics and his intentions. Trump riles people up. He knows which populations to exploit and how to do so. He is as media savvy as they come. But is he in it for the lulz? After a rally, does he walk off stage thinking, “wow, I really revealed the hypocrisy of my supporters. I really riled them up over nothing, which was terrific by the way. Tremendous.” I don’t think so. In fact, I think he’s absolutely sincere.

This might be the point where I lose some of you. And that’s fair. Sincerity is a sticky wicket. There is no way to definitively know that someone is being sincere, and that’s doubly true for politicians, and triply quadruply true for Trump. I don’t know how I could possibly present any empirical evidence to support my belief that Trump is sincere when he says he wants to build a wall and make Mexico pay for it, or when he threatens to put all American Muslims in a database, or when he says the only foreign policy advisor he needs is his big, beautiful brain. Call it a gut instinct.

And obviously, I’m not the only one who thinks Trump is sincere. That’s a huge part of his political appeal—supporters love his off-the-cuff speaking style, and his willingness to say things that, by every measure of political strategy, should tank his political campaign. It’s also why so many are terrified of him. But regardless of whether or not you believe he is sincere, it is incredibly dangerous to assume he isn’t. History proves that. In 1922, many believed that Hitler’s anti-Semitism was mere blunder and propaganda—that when he came into power he would tone down the violent rhetoric. This underestimation of Hitler’s sincerity had consequences the likes of which the world had never seen.

And that is the danger of calling him a troll. Lulz, while often achieved with violent, hurtful rhetoric, is a key element of troll intentionality. They don’t seek fame or fortune, they don’t seek political power. They want to piss you off. But Trump wants to be the commander in chief. He wants to have his finger on the most powerful nuclear arsenal in the world. He wants to mock foreign leaders and allies from the presidential pulpit, he wants to viciously beat protestors and round up Muslims, and he wants to tear apart millions of families through deportation. Calling Trump a troll undermines his potential to profoundly alter the international political landscape. It’s no lulzing matter.