Buzzfeed asked Donald Trump if he knew what trolling is. Trump didn’t know the term, so Buzzfeed explained it,

“It’s basically saying or doing things just to provoke people,” I said, explaining that there were many who considered him a troll because “provocation is your ultimate goal.” Trump bristled at the characterization. “That’s not my ultimate goal,” he protested. “My ultimate goal is to make this country great again!” But then, he thought about it for a moment. “I do love provoking people,” he conceded. “There is truth to that.”

The news media –especially those who report on, rely on, presidential electoral politics– are quick to call Donald Trump a “troll.” In this exchange, look at the word “just” in the definition, “saying or doing things just to provoke people”, that Trump isn’t really a candidate running a real election, he’s not politics as normal, but just going for attention. In the current media feeding frenzy over Trump, from Time, The Washington Post, MSNBC, and so many others, there is an emerging and necessary narrative that he’s a “troll.”

Classifying Trump as a “troll” is centrally about saving the rest of the election coverage as real and authentic. The narrative that Trump is trolling assumes and reinforces the notion that the rest of the coverage is in good faith, something news organizations desperately need to sell.

I’m not interested in convincing anyone of the falseness of electoral politics in a blog post, my point here, at best, holds to the extent you already agree with that. It seems almost too obvious to type that the presidential electoral process and its coverage are not politics in good faith, that nearly every facet is performative, the interviews largely staged, the “debates” not debates at all but many pre-planned little speeches, and so on. For the past year, news sites and Sunday morning television programs have been dissecting opinion polls in ways they know are misleading, sometimes saying so on air, something like polls at this stage usually don’t mean much, but let’s now debate these polls as if they do.

It’s of no surprise that Nate Silver, the famous statistician of the 2012 presidential election, has already run a piece about Trump as a troll. During the 2012 presidential election, Silver’s 538 blog at the New York Times captured presidential politics as a massive game, like sports, an ongoing drama of a news event designed to perpetuate itself under the guise of actual politics. He was the best at keeping score, predicting outcomes based on every poll and news cycle twist. The blog spun off into a whole website that’s poised to indulge in presenting the fiction of the 2016 campaign as fact. In declaring Trump a troll, Silver cites Wikipedia,

“A troll,” according to one definition, “is a person who sows discord … by starting arguments or upsetting people … with the deliberate intent of provoking readers into an emotional response or of otherwise disrupting normal on-topic discussion.”

By calling Trump a troll under this definition, Silver, like many political journalists, are implicitly saying that the rest of the campaigns and their coverage are “on topic” and are discussion “in good faith”. Similar to this, the Huffington Post decided to label Trump’s campaign “entertainment” instead of “politics”, which implicitly means that presidential campaign politics are something other than entertainment. Journalism professor Jay Rosen is right, Huffington Post labeling Trump as “entertainment” won’t really change how or how much they actually cover and profit from Trump. The move is wanting it both ways, to continue to mine Trump’s political entertainment for clicks while falsely branding the rest of their election coverage as something different and more real than mere entertainment.

News organizations know the election is a money-maker for them, they get ratings and clicks and something to incessantly talk about for the next year. It’s existential. The news organizations, from 24 hour television to online content farms, have more space to fill than content, more incentive to speak than things to say. A massive reality show with sports-like scorekeeping is too entertaining to remain political.

Trump is called a troll because he’s said to not be a real candidate running a real campaign, that he’s not playing by the standard rules and not engaging in politics and democracy in good faith. But this is what makes Trump like the rest of the candidates and campaigns. That Trump is gaming the election coverage isn’t some kind of unsolvable problem but what such coverage asks for. As the Diana Christensen character says in the film Network (1976), “If you’re going to hustle, at least do it right.” The “Trump problem” for journalists is solved the moment we stop presupposing that the rest of the candidates and news coverage is real and in good faith.

That Trump is putting on a media event in order to accomplish goals that may or may not have anything to do with the White House makes him like, not unlike, the rest of the campaigns. He’s not trolling but perfectly adhering to the rules of horse-race presidential politics coverage. Trump isn’t running a reality show but participating in a larger one.

You don’t troll a conversation not being done in good faith by participating in the lie. The only way to troll a conversation already a spectacle is by calling it out as such. To Troll fiction with a little fact. As Benjamin said, “A clock that is working will always be a disturbance on the stage.” A famous and equally as fictional example of this is from the film Election (1999), when one candidate trolls the equally silly school election by screaming from the podium, [the embedding is buggy, here’s a link to the video] 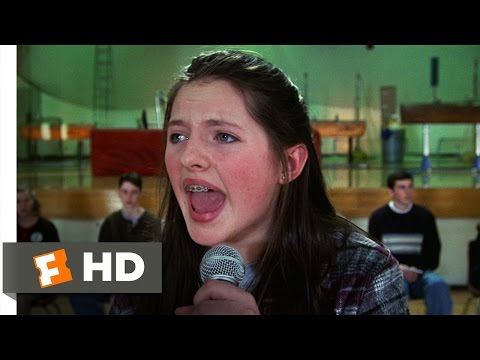 We all know it doesn’t matter who gets elected president of Carver. […] The same pathetic charade happens every year […] So vote for me. Because I don’t even want to go to college, and I don’t care. […] Or don’t vote for me! Who cares? Don’t vote at all!

Or sometimes “troll” is just a lazy term for someone who is being mean, as the DailyDot does in their piece comparing him to Gamergate because he’s willing to be mean to get attention. I don’t like defining a “troll” as someone who is mean, bigoted, and harassing because it precludes the possibility of good trolling, those who disrupt to punch up rather than down. Also, it’s a tricky way of just not calling bigotry when it happens online bigotry. Let’s stop calling Trump a “troll” but instead a bigot: He’s says shitty things that hurt people. It’s not pretend or virtual or make believe but real, quite unlike the horse race presidential campaign the news media will troll us with over the next year.

We’re being trolled, not by Trump, but by those mislabeling his campaign in an effort to sell us the fiction of this election as something genuine.