Digital Pets and the Humans Who Love Them

Getting my first Tamagotchi was a transformative moment in my life. I vividly remember standing in the Walmart aisle with my mom, painstakingly selecting the egg-shaped device that best represented my tastes. I was 9. I settled on the see-through purple plastic version—feminine and sophisticated, just like me. I was living in the golden age of Tamagotchis, when they were popular enough that all of my friends had one, but before teachers and schools started banning them in classrooms. Tamagotchis were, without a doubt, a status symbol. I can remember a friend of mine plopping down a key ring with SIX different devices, all the colors of the rainbow. I wondered how she could keep them all healthy. It seemed like a lot of responsibility for a single fourth grader. Not to mention that the net worth of this key ring was over $100, a fact that didn’t quite resonate with children whose allowance was around $10 a month. 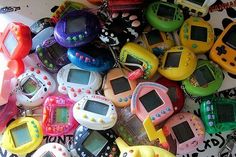 Tamagotchis required quite a bit of care. After our state-mandated standardized tests, during which we were absolutely not allowed to touch digital pets of any kind, I sat on the school bus and checked on my little alien baby to find that it was hungry, bored, and sick from the poop that had accumulated all day. It died later that evening. I was heartbroken, and directed my rage at the forces that be. Standardized testing had killed my beloved pet. A few months later, schools started banning the devices in class and I couldn’t keep mine alive anymore. I eventually gave up, as did many of my friends.

Before Tamagotchis, I was thoroughly enamored with the desktop game Petz, in which the player goes to the adoption center to select either Dogz or Catz to care for, raising their Kittenz or Puppyz into adulthood, feeding them and giving them Toyz, selecting adorable little outfits for them and taking pictures to email to… well, no one, because most 7 year olds don’t have anyone to email. 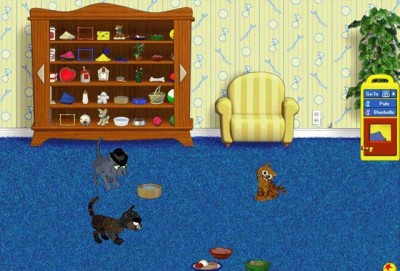 I forgot how terrible the Graphicz were

Throughout my life, I’ve seen digital pets come and go. But now, Neko Atsume has stormed the digital pet gaming world, and stolen my heart. 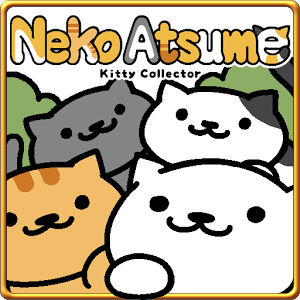 Neko Atsume is different from a lot of other digital pet games. For one, it requires very little on the part of the player. Cats don’t die. You don’t really “own” them, you just lure them to your yard with fancy foods and toys and pillows. You don’t have one or two pets, you “collect” many of them, and currently there are 49 cats in all. 17 of those cats are “rare” insofar as you need specific toys and food to draw them in. Rare cats have clever references to popular figures, such as Guy Furry (Guy Fieri), Joe DiMeowgio (Joe DiMaggio) and Chairman Meow. You can’t really interact with the cats in Neko Atsume; you can give them various foods ranging from cheap and basic to expensive and extravagant (sashimi, anyone?). You can purchase “goodies” such as cardboard boxes, paper bags, and fluffy pillows—the stuff cat dreams are made of. You can take pictures of cats, which go in their albums and show up on their profiles on “Catbook,” along with their personality traits and stats (number of visits, favorite toys, etc.). You can’t pet them, play with them, or give them anything directly.

You can’t really win Neko Atsume. You can collect all of the cats, purchase all of the goodies, upgrade and remodel your yard, and fine-tune your strategies for drawing in the cats you most desire. And then, when all of that is said and done, you can wait for the developers to release an update with new cats, new goodies, new yards.

What most interests me about Neko Atsume is that the cats don’t need you. It’s a one way relationship really—you try to attract the cats, and they favor you with their presence before setting off for, presumably, other yards with other toys. They leave a few fish—the game’s currency—behind, and after many visits they will give you a memento, such as a wet box of matches or a broken toy.

Neko Atsume also really gets cats, and cat owners. Here, I speak from personal experience as a loving mother to two cats. Paper bags with little cat butts sticking out, cardboard boxes (some of them quite elaborate) with contented faces peeking out of them, goofy furballs cramed into glass vases in ways that seem entirely uncomfortable: most cat owners can whip out their phone and scroll through albums full of these pictures. The feeling that you need your cats more than they need you is also familiar to cat “owners,” as is the frustration when you spend hundreds of fish on a cushion that Xerxes refuses to sit on even though it’s a perfectly good cushion. One difference between NA cats and IRL cats is that they are always ready for a photo: perfectly posed, never moving to lick their butt at the last second. 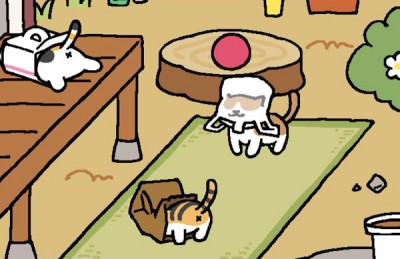 There’s so much I’d love to say about NA, such as why so many fans have such strong feelings about Tubbs, who will eat all of your food but is very generous with his fish gifts, or why fans dedicate time and energy to compiling guides about collecting rare cats. And don’t even get me started on the fantastic Neko Atsume Memes Instagram account. But ultimately, I have just one burning question about NA: why do we like it so much? And why digital pets in general? 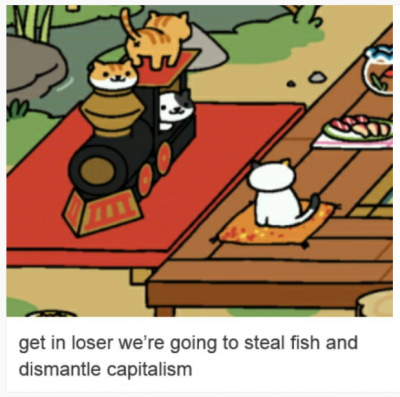 It’s significant that Tamagotchi was originally marketed to girls, as a way to prepare them for the nurturing role in which they are so often cast. Plenty of toys and games perform a similar function, and practicing caretaking skills is something that children of all genders often engage in. As an adult, having something to care for has always been an important part of my life. I’m quite proud of the fact that the plant I was given my freshman year of college still thrives after a decade under my care. Taking care of my cats also gives me a great deal of satisfaction, despite the fact that they are frequently a real pain in the ass. And even when it comes to digital pets, I’m glad if I can keep them happy and well-fed.

Being able to quantify these elements in our digital pets’ lives is also somewhat compelling. Generally speaking, I’m not a big fan of quantifying my quality of life. However, it certainly simplifies caretaking. I know for a fact that if I could opt in to a smart phone app that measured my cats’ dental health or could spot the presence of fleas, I’d absolutely sign up. And even though I can see the problems with quantifying health in this way and the persistent surveillance that digital technology has amplified, I’d still do it. Because I love them. And some part of me tells me that they’d be better off for it.

But NA is different, because you don’t really take care of them. They don’t seem to need you at all. The cats have personalities all their own: Callie is carefree, Marshmallow is aloof, Mack is determined, and Speckles is lonely. And Speckles’ loneliness can’t be cured with treats or heated blankets. NA cats are what they are, and for the most part they’re indifferent to the player, except insofar as the player can offer some creature comfort that they avail themselves of for short periods of time.

Neko Atsume isn’t about caretaking. It’s about collecting, documenting, and classifying. The goal isn’t to have happy cats, it’s to have lots of cats. All of the cats. And all of the consumer items necessary to obtain them. It is, in short, about consumption. Just as digital companions are much lower stakes than IRL pets, consumption is lower stakes than caretaking. Unlike my dead Tamagotchi, I will never know the pain of a sick or sad NA cat, though I may feel a slight twinge at the sight of an empty yard. But even an empty yard is easily remedied; refill the food, swap out some toys, and wait for the sweet sweet kitties to come pouring in.

Neko Atsume strikes the right balance of cute and quirky, strategic, and put-downable. I can neglect my cats with no consequences, and I can peek in on them when it’s convenient. It is the ideal game for the neoliberal consumer looking to fill the pages of a catalogue and identify what commodities will yield the most desirable results. Combine these ideological underpinnings with our love of adorable cats, and it’s easy to see why this game is so popular. 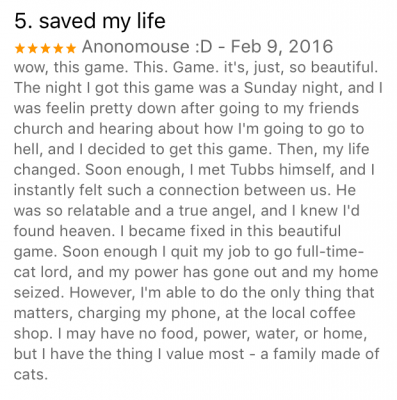