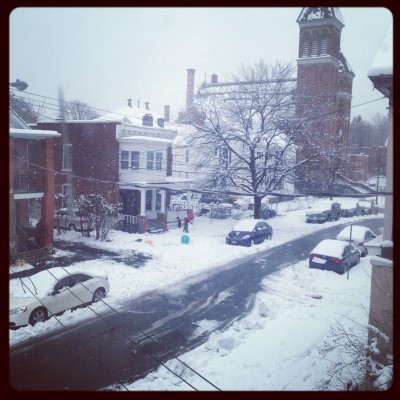 My street in winter.

Pew Research Center recently released a report saying that Americans feel better informed thanks to the internet. Well, it was released in December of 2014 but they just Tweeted the report so what was old is new again. While info glut has been a concern since Alvin Toffler’s Future Shock in the 1970s, the majority of internet users polled in this study find that they know more, not less, about the world thanks to digital technology. But what is most interesting about the study is not how much they know, but what they know more about. 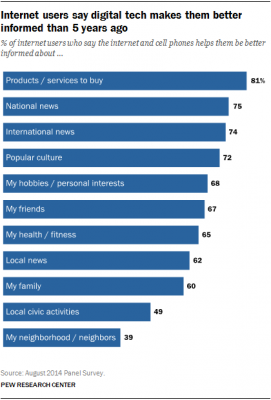 When it comes to purchases, most respondents say that the internet allows them to make better informed decisions. As we descend the chart, however, there’s a trend—the closer to home, the less useful the internet becomes. For national and international news, pop culture, and product reviews people find the internet a valuable source of information, but with regards to local activities less than half of the respondents say the internet is a useful tool.

In a sort of chicken-and-egg dilemma, we might ask which came first: the current state of community-level alienation or internet communication and technology? Robert Bellah et. al. wrote about the dwindling of community-based associations at the hand of American individualism back in 1985, and argued that this trend would have disastrous consequences for democratic governance. Similarly, Robert Putnam argued in 2000 that declining membership in social organizations such as labor unions and the Boy Scouts meant a decline in civic discussions and, therefore, fewer interactions with fellow community members and local governance. While Bellah et. al. targeted American “civil religion” and ideological individualism for his critique, Putnam included communication technology, such as television and the internet, and the individuation of leisure time as a significant force for dwindling community involvement.

The very structure of both “one-to-many” mass media and “many-to-many” digital media may help to explain why these media lend themselves to consumerism and cosmopolitanism. Both mass media and digital media rely primarily on advertising revenue, and the political economy of nearly all media runs on corporate consolidation and big business funding. Meanwhile, the proliferation of consumer goods and services has made the buying experience incredibly complex, as anyone who has spent 20 minutes reading Amazon reviews to find the right meat thermometer can tell you. The advertising model relies on sensationalist news items to attract more viewers, and these types of stories are less likely to occur at the local level. Frankly, my local news is pretty boring relative to Trump’s latest fascist tirade.

The defunding of public access television and the withering of local investigative reporting are also key elements of these trends. People are becoming more mobile, mostly thanks to job instability, and it’s harder and harder to get to know your neighbors well—in the 4 years I’ve lived in my apartment the tenants next door have changed 4 times. It’s difficult to follow my local politicians unless I knew them personally or have time to attend city council meetings. Smaller towns are often terrible at publicizing things like public meetings and proposed legislation. Even when they do the audience is often limited, especially online.

I live in a Troy, NY, population: 50,129 as of the 2010 census. If Pew is right that 84% of American adults use the internet then Troy should have about 42,000 Trojans online. The two social media sites I use to keep track of local happenings are the Troy subreddit and the Troy City Council Twitter. r/troy has 615 subscribers, and @TroyCityCouncil has 976 followers. Talk about a drop in the bucket. What’s more, both accounts see limited interaction—very few upvotes, comments, retweets, and favori—oops, sorry, “likes.” Obviously this is all just my experience, but it seems significant that in a town of 50,000 residents only 2% of them follow the city council on Twitter. New York City fares even worse—less than 0.5% of the population of NYC follows their city council’s Twitter.

Maybe the percentage of residents following a government Twitter account is a bad measure of all of this. But the question remains—why do we feel more informed about the price of pants and the Syrian civil war than street sweepings and school board meetings? And, perhaps less obvious, should it be a priority to build localism into the internet? The problem of alienation from our neighbors and communities is certainly not something that any single techno-fix is going to solve. I’m not Facebook friends with my neighbors because I simply don’t know them that well, and I don’t have many venues to get to know them in. I don’t retweet my city council because most of my followers are geographically scattered and I don’t think they really care about tomorrow’s finance meeting. The internet is only useful for learning about our neighbors if we want to know about them and have the resources to build community-based tools. The latter is an issue of public divestment, but what about the former?

I hate to ask a question that I can’t answer, but the fact is I think there are a million reasons why we aren’t as invested in our communities as we could be, and I have no concrete suggestions for changing that. Volunteerism and community associations are a common proposed solution (see again Bellah and Putnam) but this requires time, material resources, and emotional labor that are so often lacking as people work more hours for less pay and live in neighborhoods that they barely have time to invest in before they move to the next apartment. It’s a problem of time, resources, and geography that transcends the online/offline divide. Throw in the facts that city council meetings are often alienating, local news is boring and full of fluff, and all of the momentum is behind corporate ad-based media, and the cards seem stacked against flourishing local media.

Maybe these things are co-constituting. It’s hard to learn about, and therefore care about our communities because so much communication takes place online where the emphasis is global. And there is a limited presence of community life online because we just aren’t as invested as we could be. And there are a thousand other factors hindering local involvement—fear of our neighbors (thanks local news outlets for over-reporting crime), disenchantment with local politics, and a pervasive feeling that our ability to make meaningful change, even at the local level, is minimal.

This is a huge conversation and there are so many things I’ve left out. These include the ways location-based platforms tend toward bigotry (see also David Banks’ work), the work already being proposed to build local social networks, the role of Yelp and Foursquare to encourage patronage of local businesses, and the pros and cons of investing energy into digital tools for local engagement when our communities already face so many enormous obstacles. Let’s talk about all of this. Maybe even with our neighbors.

[…] Britney Summit-Gil looks at how the internet has enabled consumers to be better informed on a whole host of issues, but has lagged when it comes to understanding their own communities: […]

Here in California, I read about my neighbors online through an online mom's listserv (about 2000 people) and through my Nextdoor.com groups. I know a lot more about my neighborhoods than I ever would have in the past, and issues of local politics (increase in water fees came up today) come up frequently. Via these links, I eventually became involved in local county commission. If you want to study the question, ask a representative sample if they keep track of any neignborhood activities online. You may get a different picture.