Peeking at Columbia: Yik Yak on the Day A President Resigned

Today is a big day in Columbia, Missouri where the the University of Missouri system president Tim Wolfe resigned amidst protests over his longstanding failure to address racial issues. Led by #ConcernedStudent1950, named for the first year Black students were accepted into the university, campus protests have been ongoing for several months. Early last week, graduate student Jonathan Butler went on a hunger strike, followed by football players boycotting their athletic labor and catapulting the story into public discourse. Things came to a head this morning with Wolfe’s announcement. Of course, I went immediately to the  Columbia, Missouri Yik Yak where I refreshed compulsively.

Major themes are represented below. They include claims to reverse racism, colorblind inspired claims that racial protests create racial divides, allusions to South Park (a LOT of them, and I don’t think nostalgically…so hey there, 2001), attempts to discredit protestors as bullies or babies, attempts to discredit protests as unjust disruptions of the University’s academic function, and for good measure, panda facts and other tidbits from people for whom this is just another day. 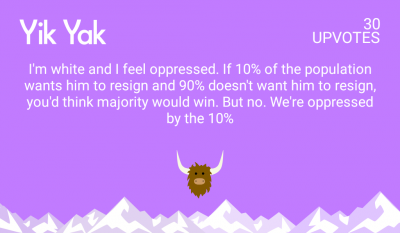 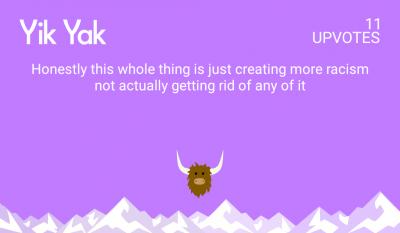 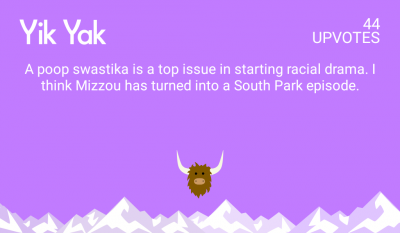 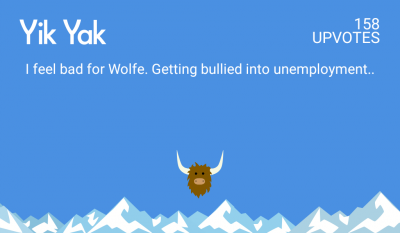 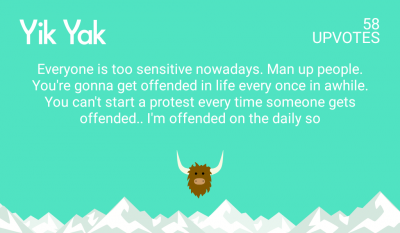 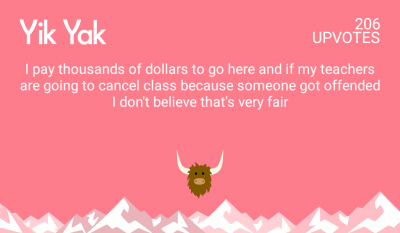 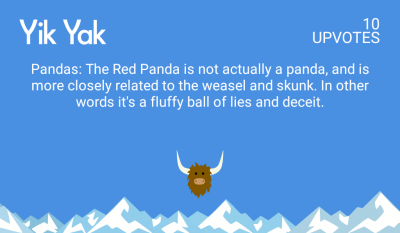 In contrast, Twitter has been largely (though not exclusively) celebratory, containing messages of solidarity and momentum building:

We also see people on Twitter citing Yik Yak as proof of the racial problem: 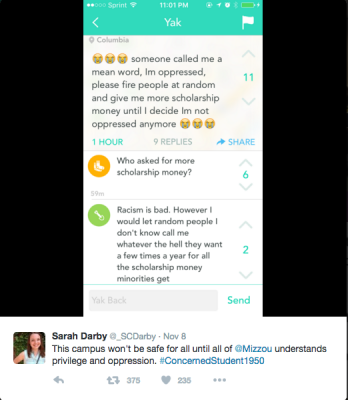 The difference in feel and content between Twitter and Yik Yak likely hinge on platform affordances and relatedly, the user base. The two platforms differ in geographic scope, level of anonymity, and algorithms of visibility.  Twitter is international in scope, while Yik Yak is locally tied. Twitter users are often identifiable, whereas Yik Yak users are not. Twitter provides both time and popularity based feeds, as does Yik Yak. However, a score of -5 will delete a Yak, whereas there is no way to downvote a tweet and one needs to lodge a formal complaint to have a tweet removed.  Twitter therefore represents a broader swath of the population, held accountable for their content. In contrast, Yik Yak represents the local community, who can speak without identification and the repercussions that identification entails. Where racism exists, Yik Yak opportunes its expression. This is what we see in Columbia, where a field of highly racist content and the affordance of up and down voting make it unlikely that protest supporters on Yik Yak will rise to “Hot” status, and exceedingly likely that their voices will dissipate from the feed altogether.