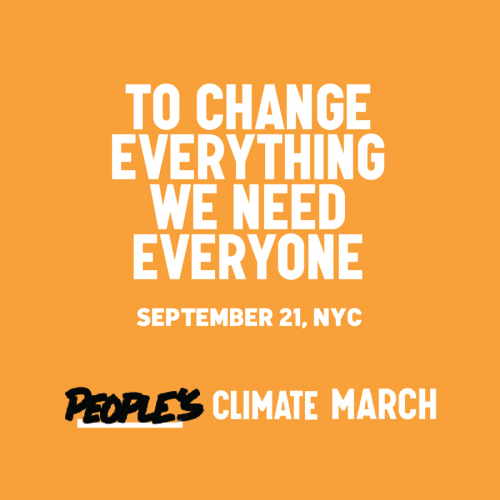 When it comes to data analysis, sometimes non-findings speak louder than findings. Particularly when non-findings shine a light on questions that aren’t being asked.

On 21 September 2014, UMd Professor of Sociology Dana R. Fisher took a small army of friends and graduate students to New York City to survey demonstrators at The People’s Climate March (PCM). The PCM survey is part of a longer thread of Dr. Fisher’s research, which surveys protestors to get a better understanding of who protests, how they are mobilized, and how their participation in protests relates to other forms of civic engagement they may partake in. Nate Silver’s data-nerd playground FiveThirtyEight.com sent a film crew to follow us to make a short documentary of our experience. The doc is part of their series The Collectors, a look at how scientists can apply rigorous research methods to a variety of unique settings outside of the laboratory.

The PCM’s greatest appeal—the thing that got us all up before dawn on a Sunday to take a bus from DC to Manhattan—was the sheer volume of potential data it made available to us. While more conservative estimates put the number of demonstrators at around 100,000, PCM organizers themselves suggest that it was closer to four times that. In any case, 350.org, who planned the march in collaboration with a long list of partner organizations, trumpeted the event as the “largest climate march in history.” By all accounts, they were right; the PCM was the brightest star in a constellation of nearly 2,600 simultaneous climate protests happening all over the world that day.

This thing was big, it was global, and it mobilized a lot of people.

Part of 350.org’s plan was to arrange protesters into neat blocks, according to where they fit along a spectrum of participant identities and organizational affiliations. Their hope was to organize participants into city-block-sized sections that would each represent a single unified ideological or social position. The map below details what these blocks were supposed to look like, and who was supposed to fill them during the assembly period before the march began. 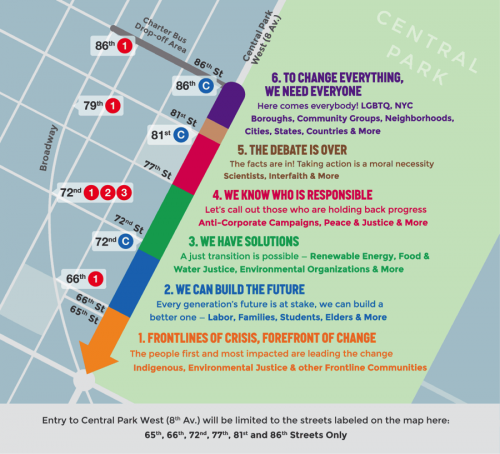 While this framework is problematic—queers and communities of color to the back of the line, please!—the idea was intriguing. Could 350.org and their partners not only mobilize hundreds of thousands of people to demonstrate, but also organize them according to their membership in different industries, communities, and schools of thought? Could the organizers realize their vision that, “To Change Everything We Need Everyone”?

To figure this out, we collected block-level data to uncover not just who showed up, but where they assembled along the march route. This is, as far as we know, the only set of protest data that allows for block-level analysis (and if we’re wrong about that, please do let us know).

The results of the preliminary analyses have been fascinating (and you can check out the descriptives here). If protest mobilization and organization are your thing, stay tuned for write-ups in the near future. But right now, I want to share a particular finding that stuck out to me as being rather important in its unimportance.

In response to the question, How did you hear about the protest?, respondents were offered a range of answers. We recoded answers into three categories: social network (word-of-mouth with family, friends, co-workers, or classmates); mediated non-Internet (such as radio, television, newspapers, flyers, and); and Internet or social media (Facebook, Twitter, blogs, listservs, and so on).

As the table below demonstrates, there was no statistically significant relationship between the block where the respondent assembled for the march and how they heard about the protest.

Significant differences may yet exist that predict how specific groups heard about the march—younger protesters may have been more likely to hear about the PCM from social media than from newspapers, for example. But at the block level, there is no clear clustering on this variable, and that speaks volumes.

What it says is that protest mobilization—getting people sufficiently riled up to take to the streets—works just as well offline as it does online. In fact, these data suggest that there is no purely online or purely offline experience at all, as social and non-Internet mediated communication often invokes Internet-mediated communication, and vise-versa. It’s not uncommon, for example, to see a QR code on a poster, or hear a hashtag being advertised in a radio commercial.

This non-finding affirms what others at Cyborgology have called the digital dualism fallacy, which has been taken to task many times before. Nathan Jurgenson and others have proposed in its place the notion of augmented reality—the “merging of material reality with digital information, as well as the augmentation of digitality with materiality”—and the table above seems to reveal that the notion applies just as well to mobilization in large-scale demonstrations. What we may be looking at here is augmented mobilization confronting the fallacy of digital dualist protest organizing.

Of course, one possible interpretation is that both online and offline forms of communication are equally bad at making people stand in line where they’re supposed to. I would argue that this interpretation relates more to the expectations of the organizers than their modes of communication: whether you advertise it in an email or through a bullhorn, maybe people just want a little more freedom to move around than your plan may grant them. We must also not ignore structural roadblocks; race, gender, and class-based inequalities at least partially determine mobilities, regardless of organizers’ expectations.

Still, the lack of significant clustering in our variable supports previous work on online activist organizing, slacktivism, and digital tactics, all of which suggests that digitality can enhance mobilization and offer greater options for protest, but neither exists outside of material conditions nor overrides the impact of material mobilization efforts.

More importantly, this non-finding suggests that current questions about mobilization and protest are predicated, at least in part, on digital dualist assumptions. Moving forward with large-scale protest research may require a new approach. This means critically evaluating digital dualist assumptions, interrogating the reflex to study digital and material mobilization tactics separately, and designing new techniques toward an understanding of augmented civic engagement.

Joe Waggle is a sociology doctoral candidate and a research fellow in the Program for Society and the Environment, where he occasionally blogs. He is also on Twitter. He would like to thank his colleagues Anya Galli and William Yagatich for their help in collecting and organizing his thoughts for this post.

How could the whole group of organizers not comprised someone who was all like, "Huh!? Is that really a good idea to distinguish between 'frontline' activists and 'everyone else'???" If the goal was to give individual small organizing groups an organized place to meet with each other, why not just alphabetically by self-attributed group name? I am seriously flabbergasted by this.