“Communities” are not Communal: fandom, capitalism, and contact zones 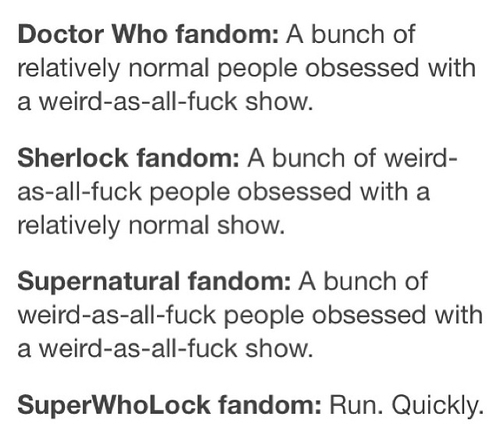 I should preface this by saying that I originally came out of what is generally referred to as “fandom” but I haven’t been part of one for a long time. Recently, though, I dipped a toe back into the water – specifically, the fandom around the TV adaptation of The Walking Dead – and I noticed some things I think are worth considering.

Just to set the stage, let’s pick an operational definition of “fandom” as it’s used here, drawn lazily from Wikipedia as if I were a sophomore in college desperately scraping together a term paper:

A subculture composed of fans characterized by a feeling of empathy and camaraderie with others who share a common interest. Fans typically are interested in even minor details of the object(s) of their fandom and spend a significant portion of their time and energy involved with their interest, often as a part of a social network with particular practices (a fandom).

What I’m talking about specifically in this case is media fandom – fandom based around books, TV shows, films, games. Sometimes entire franchises of those things (ie The Walking Dead, which is a comic, a show, and a series of games). What’s worth noting is the degree to which various fandoms and fandom as a whole tends to characterize itself/themselves as a community – a tightly-knit group that shares a unique culture and can be very protective against any perceived encroachment or threat by anyone considered an outsider.

What got me thinking about this was this excellent post, which both compares and criticizes the idea of fandom as an “imagined community”:

An imagined community, as used in fan studies, emphasizes the sense of collective belonging, of a shared vocabulary, values, language – interests – that exceeds face-to-face interactions. And there’s probably no fan that hasn’t felt that way when they’ve stumbled onto a group of people who are talking about something they love in ways that they’ve been thinking or feeling about it all along. I don’t think it’s wrong to think of fandom as imagined community, but what I do think is that, in thinking of fandom as community, we kind of favor the utopian side of communities (camaraderie, friendship, passion, a sense of being in something together, you and me against the rest of the world, etc.).

This characterization of fandom as fundamentally communal in nature obscures two things: that fandom(s) are massively diverse rather than homogenous, and that fandoms are fractious and fraught with conflict, some of it extremely nasty, both across fandoms and within them.

I knew this was true when I started actively getting into TWD fandom on Tumblr (writing fanfiction, posting commentary, conversing with other fans) but I saw especially ugly examples of it in the (hella misogynist) “wars” between fans of two different female characters (Beth Greene and Carol Peletier). Things got even more out of hand when [SPOILER] Beth was shot and presumably killed in the mid-season finale and her fans launched a campaign to get her back on the show (which launched a counter-campaign, which turned into people yelling abuse at each other everywhere, which turned into wild accusations getting thrown around regarding behind the scenes wheeling and dealing, which turned into… whatever, you don’t even want to know). But I noticed this especially because it was an example of intense and very personal conflict within the kind of thing that’s often characterized as a single cohesive group.

Which is why I think, as the post says, that the idea of fandom as a “contact zone” is far more useful, and which is defined by Mary Pratt as:

Social spaces where cultures meet, clash, and grapple with each other, often in contexts of highly asymmetrical relations of power.

The clashing and grappling is especially important here, as is the idea of asymmetrical power, especially when one considers the implications of identity and social inequality in this kind of social space, and the fact that dominant identities tend to become the faces of whatever group we’re talking about:

[S]ometimes when in a shared space with a lot of people who also share multiple identity labels, and where the space is often identified with (not by) those ‘affiliated identities’… members can become complacent and assume that everyone they meet – or at least everyone in that space – shares the same perspectives, values, and identities aside from the primary label which defines the space.  But: just because ‘affiliated identity’ labels may be the most visible doesn’t mean that they’re always the most common (privilege and power and popularity/social capital being what they are).

The author of the post goes on to point out that we can see these dominant identities sharpening and hardening their claim to these social spaces when they perceive that new categories of identity are encroaching on that space. The obvious contemporary example of this at the moment is what’s been happening in the gamer “community”, where a group that possesses a high degree of social power – straight white cisgender men – perceives its claim to the “gamer” identity as under attack by women, queer people, gender non-conforming people, etc. regardless of the fact that those interlopers have been there since the beginning.

What’s interesting there is that in the case of the gamer “community”, what’s truly going on is that a single group is not only laying specific claim to a particular label but, in doing so, is attempting to present the community (as they define it) as a united front by excluding everyone who doesn’t fall into their category(s) of identity.

Which is one reason why the very idea of a gamer “community” has been subject to a lot of skepticism lately.

So far I’m not saying much that the post linked above doesn’t. What I have to add is more a suggestion for future consideration than any specific claim. What I see missing from those two posts is any explicit consideration of the role capitalism plays in the establishment of these different affiliated identities and the varying degrees of social power they bear.

The “gamer” community was arguably defined in part by the game industry itself, who created the culture of a market they could then sell things to. That example is a lot more blatant than others, but I think the same processes are at work elsewhere. One could refer to the ways in which different studios and networks make use of social media in their marketing, but I think it’s at work in even more subtle ways, and I want to return to The Walking Dead as an example.

The petition that heads the campaign to bring Beth back has garnered over 50,000 signatures and has gotten press coverage in places like Forbes and Good Morning America. This is great for fans of Beth, but it’s also great for the show and the network, because it’s free publicity (especially given that the showrunner and producers and even actors have been eerily silent since the episode aired). As more than one person has pointed out, by appearing to kill a popular character the show has arguably not only avoided driving people away but has attracted people who previously might not have been interested. I’ve seen several of my friends say they might start watching the show simply because they want to see what all the fuss is about.

This is all very complicated, and the relationships here are difficult to untangle. So far I’m not prepared to go beyond pointing and waving at that complication and suggesting that fandom as site for conflict rather than center of cohesive community presents some opportunities for certain people, and can’t be understood in the absence of those things.

And that when we look at these groups, it would probably be wise to not assume that they all get along.