Triggered: An Ethic of Collective Forgetting 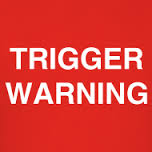 Over the summer I began supervising a student for an independent study of BDSM and Kink communities. To begin, this student created a list of academic articles, books, and blog posts relevant to the question of study. I will be reading along with the student, and am currently making my way through the blogosphere. In doing so, I’ve been struck by the prevalence of “trigger warnings” attached to blog posts, many of which deal with safety, abuse, and rape culture. Many readers are probably familiar with the trigger warning. Posted in front of potentially upsetting content, the trigger warning gives potential readers a heads up about the nature of the text, sound, or images that follow.

It is perhaps unsurprising that trigger warnings are common among bloggers writing about rape, consent, and sex-positive encounters. These are sensitive topics and the authors (the ones that my student and I have been reading) come at these topics from a conscientiously critical feminist perspective. But what about all of those trigger warnings outside of this explicitly conscientious space? Although unscientific, I’ve noticed an abundance of trigger warnings throughout my Twitter and Facebook feeds as people share content with one another.  The phenomena has even spread to higher education, with students and universities calling for the integration of trigger warnings into class syllabi (though this is not without critique).

The short answer to question 1—why are trigger warnings so prevalent?— is that through technological developments, content is abundant, and consumers are hit hard and fast with a lot of things they did not necessarily seek out. This makes suppression difficult. Trigger warnings make suppression little easier.  And suppression, or active forgetting[i], can be important to mental functioning.

Suppression is not unique to the contemporary era. Actively forgetting traumatic or upsetting events and realities is a well-worn human pastime.  Recall, for example, the first time you got dumped. Aside from writhing around on the floor in a puddle of your own snot and tears screaming “whyyyyyyy!?!?!,” it’s likely you also avoided certain songs on the radio, didn’t go to certain restaurants for awhile, took down (or burned?) that picture of the two of you which hung so prominently in your high school locker or sat framed by your bedside. You may have even forbade your friends from mentioning your ex-lover’s name. These are all means of active forgetting, and they were around before the Internet.

But new technological developments have complicated active forgetting by locating sociality, work, and leisure in content rich environments; environments in which content creators likely don’t have you in mind. I’ve written previously about curation, and this is of particular relevance here. Content rich environments require that people curate through the mass of images and text, seeking out what they want to consume and avoiding what they don’t. And content they don’t want, can hit unexpectedly. This is why trigger warnings matter. They are a curatorial tool in a curation-heavy context.

This brings me to my second question: what do trigger warnings add to the conversation about human relationships as they develop with and through new technologies?

Things did not have to develop this way. If I had taken bets five years ago, I would have guessed that within the context of liberal ideology, curation would be left to personal responsibility. I would have guessed that something like the trigger warning would either not exist, or exist in small niche communities, largely absent from the mainstream. This would have been a well- founded guess, given the presence of things like revenge porn and shaming narratives with regards to data exposure.  But in this case, this one instance of individualism versus collectivism, I would have been wrong. And I’m happy about that.

[i] The idea of “active forgetting” comes from an in-progress paper by James Chouinard—my partner in life and sociology. This post is largely a product of our conversation about active forgetting in light of new technologies, which occurred over a wonderful plate of very deeply fried tofu.

[…] For full article, see: Triggered: An Ethic of Collective Forgetting […]