Last week, The Verge’s Adrianne Jeffries (@adrjeffries) asked a really provocative titular question: “If you back a Kickstarter Project that sells for $2 billion, do you deserve to get rich?” After interviewing venture capitalists and the like she concludes that the answer isn’t even “no” it’s “that’s ridiculous.” After speaking to Spark Capital’s Mo Koyfman Jeffries writes, “Oculus raised money on Kickstarter because it wanted to see if people wanted and would buy the product, and whether developers wanted it and would build games for it. The wildly successful campaign validated that premise, and made it much easier for Oculus to raise money from venture capitalists.”

Kickstarter’s biggest innovation is its ability to cut two time-consuming tasks –market research and startup funds– down to a 90 day fundraising window. Companies that choose to use Kickstarter usually aren’t ready to offer equity because that comes after the two steps that Kickstarter is so useful in accelerating. Or, perhaps more honestly, companies opt to use Kickstarter precisely because they want to avoid selling off shares of their company as much as possible. Jeffries gives us a good financial and legal (juridical, if we want to be Foucauldian about it) but that seems like a wholly unfulfilling argument for someone who spent $25 on an Oculus-branded t-shirt. Let’s forget for a moment about what’s legal and normal –those things are rarely moral or fair– and start to compare what happens on Kickstarter to similar (and much older) social arrangements. To start, let’s go way back to the early 1990s.

In episode 93 entitled “The Soup” Jerry Seinfeld finds himself unwittingly locked into a debt/credit arrangement.  A comedian even more annoying than himself  named Kenny Bania refuses to agree that a debt for an Armani suit is cleared. The releveant parts are in the YouTube video below but the gist is that Bania lures Jerry in by not asking for anything in exchange for the suit. Then, once Jerry is wearing the jacket, Bania strongly suggests Jerry could buy him dinner as payback. Once they’re at dinner, Bania declares that this will not complete the transaction because he’s just going to have soup. Bania can and does keep Jerry in his debt until Jerry gives the suit away. 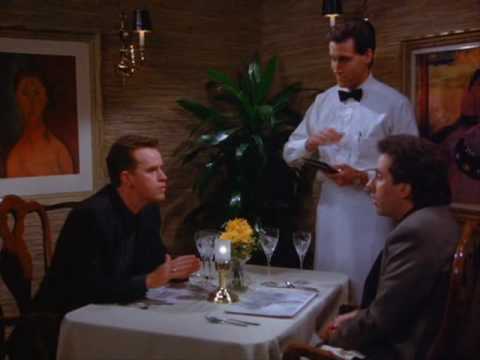 It seems as though many backers feel as though they only got soup after giving away an Armani suit. The extended metaphor is apt here, because while the economic relations fostered by Kickstarter are an abnormality when compared to the rest of human history (more on that later), backers really are acting like Bania expecting something from Jerry: It is both naive and obnoxious to complain about fairness and inequality because instead of stock options you are in possession of a “worthless $300 obsolete VR headset” a.k.a. the most advanced consumer-grade virtual reality system to date.   The problem isn’t that Oculus was able to cash out for 145 times what they raised on Kickstarter, it’s that Kickstarter doesn’t care to foster extended relationships between backers and project makers in the first place. Kickstarter works on the capitalist model of debt that anthropologist David Graeber describes as “a promise corrupted by both math and violence.”

Kickstarter isn’t kickstarting businesses so much as it’s kickstarting relationships based on debt. When you buy your copies of W.A.N.T or Murmuration: A Festival of Drone Culture what you are really providing is an interest-free loan to be paid back in rewards. Backers aren’t just purchasing a future product, they’re establishing a network of (more or less) mutually-beneficial economic relationships with the project creator. When a couple hundred people dump a couple thousand dollars on one person they aren’t just consuming goods and services; they are also saying something about what sorts of relationships they want to foster and strengthen. This is especially obvious in Kickstarter’s FAQ where they answer “Where do backers come from?”

In most cases, the majority of funding initially comes from the fans and friends of each project. If they like it, they’ll spread the word to their friends, and so on. Press, blogs, Twitter, Facebook, and Kickstarter itself are also big sources of traffic and pledges. Altogether, millions of people visit Kickstarter every week.

To an anthropologist, this should sound awfully familiar. For the vast majority of human history, small, rural villages have been ordered and arranged through the giving of gifts to newlyweds and new parents. The gift giving is not primarily as a sign of affection, but as a means to begin a debt that binds the new family unit to the larger community. It makes sense then, that Kickstarter campaigns begin with friends and spread outward: unlike purchasing an already-existing good with cash, backing a Kickstarter project requires a good deal of trust at first. It’s only after your network demonstrates trust in you that strangers’ trust can be won as well.  It is for this reason that we shouldn’t over-determine the giving and taking that happens on Kickstarter (or anywhere else, really) and instead think more deeply about what sorts of organizational forms are produced through that giving and taking.

Facebook’s acquisition of Oculus strikes us as unfair to its backers –and it has to or Jeffries would have never written that article in the first place– because it goes against some of the most basic precepts of human civilization. It flies in the face of centuries’ worth of human experience in creating sustainable and egalitarian communities. Economic relationships are relationships of trust and do not end until debts are canceled out with sufficient payments. The problem with Oculus is that everything seemed as though it had canceled out. But when one party benefits enormously, the debt no longer seems paid because that value had to come from somewhere. It’s as if we ordered the swordfish but got the soup and our dining companion revealed that they just purchased the restaurant.  To illustrate this point further, I want to turn to a lengthy quote from David Graeber’s Debt. In the quote he summarizes the experiences of anthropologist Laura Bohannan with a community in rural Nigeria called the Tiv:

…neighbors immediately began arriving bearing little gifts: “two ears corn, one vegetable marrow, one chicken, five tomatoes, one handful peanuts.”27 Having no idea what was expected of her, she thanked them and wrote down in a notebook their names and what they had brought. Eventually, two women adopted her and explained that all such gifts did have to be returned. It would be entirely inappropriate to simply accept three eggs from a neighbor and never bring anything back. One did not have to bring back eggs, but one should bring some­ thing back of approximately the same value. One could even bring money-there was nothing inappropriate in that-provided one did so at a discreet interval, and above all, that one did not bring the exact cost of the eggs. It had to be either a bit more or a bit less. To bring back nothing at all would be to cast oneself as an exploiter or a parasite. To bring back an exact equivalent would be to suggest that one no longer wishes to have anything to do with the neighbor. Tiv women, she learned, might spend a good part of the day walking for miles to distant homesteads to return a handful of okra or a tiny bit of change, “in an endless circle of gifts to which no one ever handed over the precise value of the object last received”-and in doing so, they were continually creating their society.

Kickstarter serves up corrupted promises by sticking too-exact prices on uncertain futures. If we want projects like Oculus to remain financially stable but also independent of larger companies like Facebook, then we need something dramatically different than Kickstarter. We need something that fosters the continual creation of a society outside of large corporations, which may include making sure no one in the society has the ability to become a large corporation without everyone benefiting according to a predetermined arrangement. The fulfillment of donations with rewards has to be the beginning, not the end, of a burgeoning company’s relationship to its future customers. Or, more broadly, we need platforms that host and advertise requests to form lasting and mutually beneficial economic arrangements. For that to happen though, I think we need a radically different and far less numerical approach to debts and credits. We should also seriously question the utility of categories like customer, proprietor, user, and host.

The idea that this platform –something as mundane as a web site– could herald an end to this brief historical abnormality called capitalism is just as naive as expecting dividends from Oculus/Facebook or a full meal from Jerry Seinfeld. But if such a platform were to come about, I think it would follow very naturally from what Nathan Jurgenson has previously called Silicon Valley’s anti-capitalist capitalism. It is “a type of capitalism that is predicated, knowingly or unknowingly, on the idea of anti-capitalism. It’s not a capitalist logic that can co-opt anti-capitalism, but capitalism where anti-capitalism is an inherent part of its logic.” It only seems like a matter of time before someone finds a way to generate revenue from playing host to the kind of mutual aid that has sustained humans for thousands of years.

Capitalism is intrinsically linked to money. Any business model that relies on money plays into the hands of capitalism.

[…] on location-based dating and hook-up apps like Tindr and SinglesAroundMe and why we should be grumpy that Facebook bought Oculus, because Kickstarter is supposed to set up “relationships based on […]

[…] Why Facebook’s Acquisition of Oculus Still Seems Unfair on Cyborgology […]

The premise to this article fails to recognize that patronage is not debt-inducing, fiscally speaking. It makes little difference should one patronize the latest blockbuster in 3D, a specialty restaurant or a Kickstarter campaign: some folks have more cash than wherewithal, yet have the intellect to recognize that relationship and, therefore, support the wherewithal with cash. Zero sum, if cash is recognized as equal to anything for which it can be exchanged.