In what follows, I delineate a language with which we can think about the body as technology, and in particular, politicized technology. We can do so, I argue, with Ernst Schraube’s conceptualization of technology as materialized action. I begin by laying out this theoretical framework. I then apply this conceptualization to the body, with a focus on body size.

The conceptualization of technology as materialized action comes from a 2009 essay written by Ernst Schraube.  Here, Schraube synthesizes and builds on both Critical Psychology and Actor-Network-Theory.

Schraube begins with critical psychologist Klaus Holzkamp’s conceptualization of objectification—the notion that material artifacts are more than a means to an end, but are imbued with human subjectivity. The initiation of production stems and is shaped by a particular human need, and the produced artifact, as a tool used to satiate that need, carries in it human agency and subjectivity.

Roads, for example, hold in them the human need to work, socialize, and participate in commerce in light of a sprawling landscape and increasingly differentiated division of labor. This human agency is literally built in to the asphalt, road signs, and bridges that enable car and bus travel.

Schraube critiques objectification, however, for ignoring the independent effects of material artifacts upon humans. He succinctly sates:

To buttress this weakness of the objectification perspective, Schraube calls upon Actor Network Theory to argue that indeed, material objects act back upon their human creators and users—instructing them, in the famous words of ANT theorist Bruno Latour,  to ‘do this, do that, behave this way, don’t go that way, you may do so, be allowed to go there.’

To capture both the subjectivity and independent efficacy of technological artifacts, Schraube refers to artifacts as materialized action.

It is not only the subjects that do something with the things; the things also do something with the subjects. The “means-to-an-end” perspective fails the independence, materiality, and efficacy of things. Absolutizing this perspective holds the danger of voluntarism and an understanding of seemingly disposing freely over created artifacts, treating them just as we want. To make it clear that, on the one hand—in line with the objectification concept—human subjectivity and agency are materialized in the object, while, on the other hand, the materiality of the object can release an independent power and efficacy, I propose to conceptualize the created objects as materialized action

…Things are more than just societal meanings, more than just socially conceived and produced items. They always materialize, in addition, an unknown action, something coincidental, unplanned, and their decisive power and efficacy can frequently be located just in what had not originally been imagined or intended

The body is simultaneously infused with human meaning and independent efficacy. The body is an object created out of human choices about (literal) consumption, adornment, and sculpture. At the same time, the body tells the person to ‘eat this, wear that, desire hir, move like this.’ The body then, as materialized action, is necessarily precarious. We cannot know what effect the relationship between the person and hir body will produce. Does a thin body reflect and effect fitness, or does it reflect and affect poor body image and restrictive self-control? Does a fat body reflect and affect indulgence, or does it reflect and affect acceptance and pleasure?

To embrace this ambivalence, I argue, is the means by which the body—as a technology—can be transformed into a politicized tool. Such a transformation is exemplified in the Fat Positive movements.  Fat Positive movements exist in juxtaposition to narrow (pun intended) beauty standards that not only exclude the majority of U.S. women, but bring about anxiety, guilt, and sometimes dangerous behaviors of voluntary starvation, purging, and/or excessive exercise. Importantly, these sensibilities (a privileging of thinness and its behavioral and psychological consequences) are largely produced through the (often institutionally facilitated) accomplishment of thinness, and the public display of thin bodies. Fat Activists, in contrast, imbue (often their own) bodies with different meaning. 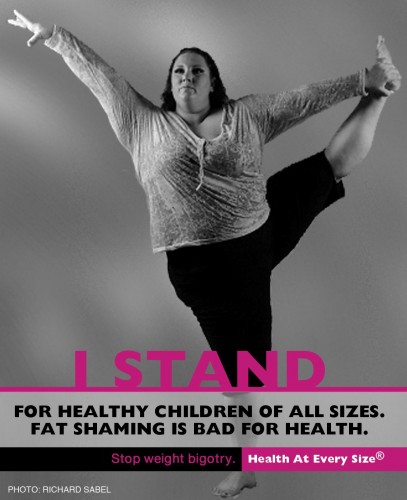 In a culture in which thin is deemed not only beautiful, but also moral, a fat woman in a bikini is a radical act. Embracing this radicalism, Fat Activists proudly display, maintain, and/or publicly support large bodies. In doing so, they use these bodies as objects to affect an explicit kind of change—that of both ideology and behavior—which they hope will alter the subjectivity imbued in future bodies.

In short, with materialized action as a framework, we have a language with which to talk about the body as a tool, one full of human agency with the potential for imagined, and unimaginable, effects. As a politicized technology, the body can be used to challenge not only fatness (as described here), but heteronormativity, binary gender categories,ableism, and white racial privilege. We should be warned, however, that the ambivalence of artifacts, with their potential for unimagined effects, means that the body—like all technologies—can be used for both revolutionary change (e.g. Fat Activism) AND stagnant, sometimes repressive, reification (e.g. Thinspiration). Indeed, the latter is far more common than the former, as it is only through recognition of the body as an object of materialized action, coupled with a propensity for change, that such stagnation can be fought.

Jenny Davis is a Doctoral Candidate in the Department of Sociology at Texas A&M University. She is a regular contributor for Cybogology. Follow Jenny on Twitter @Jup83

[...] have elsewhere referenced technology as materialized action. We construct and utilize technology based on human need, and are forever changed for it. Humans, [...]

From Pinterest to the Prison Industrial Complex » Cyborgology — December 12, 2012

[...] this demonstrates the unpredictability of technology—in use and consequence. I’ve written previously about Ernst Schraube’s notion of technology as materialized action, an understanding that [...]

[...] to be unsympathetic, I have argued myself that the body can be understood as a technology—or more specifically—as materialized [...]