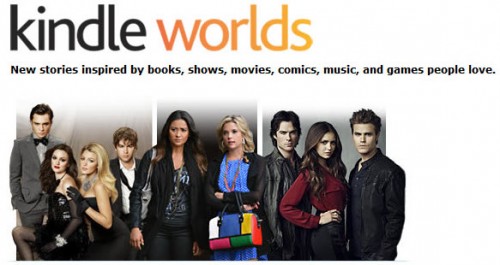 Before we get into it, allow me to direct your attention to the massive link roundup about this on Fanlore. It’s worth a look on its own, and contains many awesome arguments and viewpoints to which I can’t do justice here.

It was one of those moments of glorious serendipity that, a day before I left for Wiscon – a weekend of feminist SF and fandom in Madison, Wisconsin, hence the name – Amazon announced that they would start selling fanfiction.

Specifically, the venture is called Kindle Worlds, wherein Amazon has secured licenses for various IPs in order to allow writers to publish fic set in those various canon for which they will receive royalties – while, of course, Amazon takes its cut (and it’s a sizable cut). So far the only licenses specified are the CW’s The Vampire Diaries and Gossip Girl, and ABC’s Pretty Little Liars, but Amazon indicates that writers will be able to publish fic from “popular books, shows, movies, comics, music, and games” and they claim that more licenses are on the way.

And fandom exploded, as fandom is wont to do.

The issues fall into two broad and interrelated categories.

First, there’s the fact that, as I’ve written about before on this blog, fandom has a long-standing tradition of resisting monetization. The practice of “pull-to-publish” work is generally looked down on, even more if the work is successful (witness Fifty Shades of Grey). Fandom tends to be a gift economy that runs on love of canon, a wildly creative space in which people exchange time, effort, feedback, and powerfully positive emotions in order to produce transformative work. A gift economy of this type is pretty much ideologically opposed to traditional consumer capitalism – or, if it isn’t necessarily opposed, it exists completely outside of that sphere. It isn’t that people in fandom don’t want to make money; it’s that money isn’t why they’re in fandom.

Add to this the fact that the ways in which fans engage in transformative work are often radical in nature; from the earliest days of what we now recognize as fandom, fans were inserting queer content into fannish extensions of canon, exploring issues of race, class, gender, and how we define humanity itself in ways that the canon couldn’t or wouldn’t do.  Radical messaging has historically not played well with corporatization, yet from second wave feminism to Occupy there is a long history of radical messaging being co-opted by corporations. Fans who perceive their work as political – and there are many fans who have and do – are unlikely to regard Amazon’s venture favorably.

Put everything together and what you have is a deep cultural clash between the value system on which Amazon runs and the value system behind fandom. People who imagine that this is simply a great thing for fans because who wouldn’t want to get paid for their work are entirely missing the point.

So okay, this is obnoxious. But why is it an problem? For that – and to set up the next category of issues – allow me to refer to my post linked above:

[I]f companies start blurring the line between official/licensed and unofficial/fan-produced, I think that opens an immense can of worms, in terms of fandom culture, in terms of legalities, and in terms of what everyone is prepared to accept and expect as appropriate. Fandom has been so robust and done so well precisely because it has fiercely protected autonomy.

The problem is the blurring of the line between “official” and “fannish”. The success of Fifty Shades of Grey, among other things, made that blurring implicit. Kindle Worlds makes it explicit, and, in so doing, sets a problematic precedent regarding the relationship between fans and the corporations that provide content. And fans aren’t the only ones worried.

First, excellently summarized here by John Scalzi, there are the extremely unfavorable contract terms that Amazon is offering. Amazon requires that authors sign over their rights to their work for the term of copyright, which, as Scalzi puts it:

Once Amazon has it, they have the right to do anything they want with it, including possibly using it in anthologies or selling it other languages, etc, without paying the author anything else for it, ever.

But even more worrying is this: “We will also give the World Licensor a license to use your new elements and incorporate them into other works without further compensation to you.”

i.e., that really cool creative idea you put in your story, or that awesome new character you made? If Alloy Entertainment likes it, they can take it and use it for their own purposes without paying you…Essentially, this means that all the work in the Kindle Worlds arena is a work for hire that Alloy (and whomever else signs on) can mine with impunity. This is a very good deal for Alloy, et al — they’re getting story ideas! Free! — and less of a good deal for the actual writers themselves. I mean, the official media tie-in writers and script writers are doing work for hire, too, but they get advances and\or at least WGA minimum scale for their work.

[E]veryone is responding to this as a way to monetize fan fiction, but that’s slightly off. It’s really a way for Amazon to disinter mediate media tie in novels, where packagers and publishers approach authors to write in an established media universe.

This, to my mind, is the truly troubling part, and the truly troubling thing about the precedent that Amazon is setting with Kindle Worlds. As Malinda Lo points out, “who gets to decide which elements of your work are ‘original’?” By signing on with Amazon, everything is potentially up for grabs. And the practical implications of this are that traditional tie-in writers might no longer be needed at all. Instead of having to pay authors advances and higher royalty rates, Kindle Worlds presents a dystopian future where media tie-ins are entirely produced by poorly compensated fandom content-serfs, where traditional writers of original fiction are simply no longer needed.

It’s worth pointing out that this would probably not be possible without the ways in which digital publishing has vastly lowered barriers to entry, flooding the business with un-agented would-be authors who may or may not know how to recognize when someone is trying to contractually screw them. Amazon is clearly counting on people not knowing or not caring about all the ways in which its terms are disadvantageous to authors. It’s not that authors weren’t getting screwed before, but now it’s that much easier for entities like Amazon to get away with it (though it’s also easier to spread info about bad deals).

It also shouldn’t escape notice that so far, Amazon has acquired licenses for shows aimed at younger audiences – audiences who might not be aware of the massive, gift economy fandom presence that already exists. It remains to be seen what other licenses will go after, but it’s still worth a mention.

So why should anyone but writers care? Because the saga of Kindle Worlds and what it suggests has potentially far-reaching consequences regarding what corporations desire and expect from the creators of their content, and where new kinds of publishing may be allowing them to look. E-publishing, as many others have noticed, is not going anywhere, and is likely to continue to grow as a model. The publishers – and distributors of content/holders of IPs – who profit most from the associated changed in the technology of publishing are the ones who adapt first and most quickly. What Kindle Worlds gives us is a potentially troubling look at one form of adaptation.

And as always, the question we should be asking when we consider who profits from a specific arrangement is who bears the costs.

Sarah is unapologetically fannish about many things on Twitter – @dynamicsymmetry

[...] “Put everything together and what you have is a deep cultural clash between the value system on which...” [...]

Prime Air, Discourse, and the Expansion of the Probable » Cyborgology — December 2, 2013

[…] while back, I wrote about another Amazon venture called Kindle Worlds, which was essentially a program for monetizing fandom by collecting the licenses for intellectual […]