Toward an Augmented Eventfulness 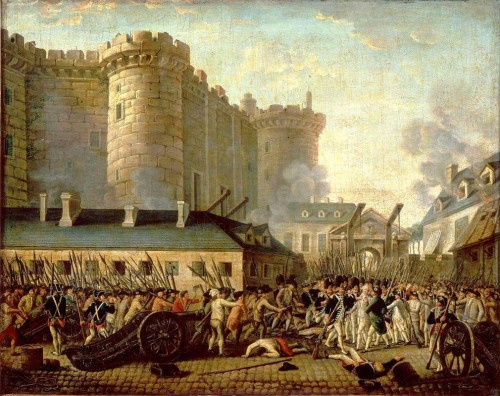 I’m trained – in part – as a historical sociologist, focusing especially on periods of political upheaval, but I don’t have a whole lot of occasion to make use of it at the moment. However, when working on the proposal for my dissertation this past month – which will be on Occupy, emotion, and technology – there emerged an argument that isn’t directly related to my primary thesis but which I like. Not least because I think it’s useful, and it touched on an area that we don’t cover enough in our discussions about what augmented reality really means for how we do different kinds of analysis. We usually talk about augmented reality in terms of a conceptual framework to be applied in the present and into the future, but as I’ve argued before, it’s also useful for how we look at the past and what the past suggests about the present and future. It has temporal applications that are actually quite broad. I think there’s a possibility of being a kind of augmented historian.

One of the major components of any historical project is the definition of events – what happens when, how, why, and what it means. All human concepts of time are artificial, constructed – how we block out seconds and hours and days, what we understand as a year. This comes up in especially tricky ways when one does any work with history, because one has to figure out how to block out segments of time to cover, simply in order to make the work manageable if nothing else. But the historian also blocks out periods of time in order to reveal something intelligible and – ideally – useful for understanding things like cause and effect, how one happening leads to another. In short, one of the tasks of historiography is the construction and description of a “plot” for human events in the past.

William Sewell, dealing specifically with instances of dramatic social change, characterized this kind of work as the study of events – divisions of time that are bounded in particular ways and identified through particular defining features. Sewell describes a number of these features in an analysis of the storming of the Bastille in the context of the French Revolution (hang around a historical sociologist for more than five minutes and you’ll hear something about the French Revolution), with some of the features he highlights being dramatic creativity, the presence of powerful rituals, high levels of emotion, cultural transformation, and the rearticulation of social structures. So events, in Sewell’s terms, are not only periods of time where a lot is going on – or where one major thing is going on – but which are transformative in terms of how an entire society looks and behaves. They change things. And the elements of that change are occurring on multiple levels.

So what does this have to do with Occupy, and other social movements like it? Potentially, I argue, everything.

One of the things that led to us spending so much time and effort writing about Occupy on this blog – aside from the fact that it was just kind of generally cool – was that it was clearly an augmented movement; it had significant digital and physical components, working together to produce a single movement reality. The creativity of the movement wasn’t confined to chanted slogans and posters and the creation of new organizational forms , like the GAs and the Human Mic, but also showed up in places like the Pepper-Spraying Cop. Information about the movement was spread through a variety of social media sites, and that information could and probably did lead to direct physical action. Livestreams of protests viewed in a browser window were real-time representations of things happening to physical bodies, and an emotionally engaged viewer would feel the embodied effects of the emotion spread via digital means – tension, a churning stomach, the ache of seeing unarmed people injured by police. And again, these digital elements of the movement were not only digital, because nothing about the movement was only one thing or the other. The actions and reactions of movement participants, the things they were acting and reacting to, the dynamics of the movement components – all of these things can and should be understood as augmented.

This might seem obvious at this point to most readers of this blog, but it’s still a point worth making clearly, if for no other reason than that scholars of historical social revolutions aren’t yet thinking in those terms, at least not for the most part. Sidney Tarrow and Doug McAdam, just to name a couple, have talked at some length about media, but that’s still not the same thing as making an argument for the explicit study of augmented revolution.

So to jump back to Sewell, what I’m arguing for here specifically is not just augmented revolution, but augmented eventfulness – the recognition that the dynamics of a historical event need to be understood in the terms of augmented reality, that the dynamics that are at work within a bounded event have reality that goes beyond the physical. And that, additionally, we need to be conscious of the augmented nature of these events when we’re deciding what their temporal boundaries should be. Just because the reactions and additional actions pertaining to the event’s catalyst aren’t taking place on the streets doesn’t mean that they aren’t still important. And we can’t always explain what’s happening on the streets by looking at the streets alone.

Obviously, the consideration of the role of digital movement components isn’t as easy to work with in time periods before the rise of digital technology, but we’ve always been augmented in one form or another. During the French Revolution, people had access to the then-equivalents of contemporary communications technology. Technology that facilitated communication arguably had a huge role to play in the cycle of contention seen in the revolutions of 1848. This stuff has always been going on.

We don’t need to come up with anything new in order to understand that. We just need to recognize what was already there.